ROCKVILLE, Md. (DTN) -- Mother Nature has been throwing some mean punches recently, and Stephen Ellis has the bruised fields to prove it.

"Our April-planted soybeans were about 3 inches tall and had four leaves on them," the Tappahannock, Virginia, farmer said. Then the temperature dropped to 29 degrees Fahrenheit for several hours in the early morning hours of May 10. "The next day, some of them were just almost a dark purple to black, and limp," Ellis recalled.

Depending on the growth stage of their corn and soybean fields, farmers across the far northern tier of the Plains and Midwest and deep into the Eastern Corn Belt faced potentially damaging temperatures from Friday, May 8, through Monday, May 11, noted DTN Senior Ag Meteorologist Bryce Anderson.

Temperatures fell into the 20s in the early morning hours on most of those days for a wide geography, with a brief plunge into the teens in the Dakotas on Monday, he noted.

With those wintry temperatures in the rearview mirror, now is the time for growers to walk fields, assess damage and make hard decisions about replanting or staying the course, agronomists told DTN.

Here are some things to keep in mind.

With temperatures headed into the 80s in Virginia late this week, Ellis feels certain he will know the full picture by the end of the weekend. "Once everything that got hit turns brown, we start looking for green and we can see where we're at," he said.

-- CORN: Remember that corn is fairly cold tolerant until about the V6 stage of growth, when the plant's growing point starts moving above the soil line, said Ben Pieper, agronomist and product manager for Merschman Seeds, based in West Point, Iowa.

Corn plants can sustain a fair amount of freeze injury to their leaves and recover, if the accompanying temperatures didn't stay below 28 degrees for more than two hours, Bob Nielsen, a Purdue University corn agronomist, added in a university advisory on assessing freeze damage to corn.

"Within three to five days of the frost event (more quickly with warm temperatures, more slowly if cool), elongation of the undamaged leaf tissue in the whorl will become evident," Nielsen noted. "As long as the recovery is vigorous, subsequent stand establishment should be not be affected." See more here: https://extension.entm.purdue.edu/….

Ellis was relieved to see most of his four-leaf corn seems prepared to recover. "It laid over in a couple of fields, but it's still green in the middle, so I'm confident it will keep growing," he said.

-- SOYBEANS: Soybeans can be more vulnerable to freezes, as the plants open up their cotyledons and expose their growing point (the apical meristem) to the air very shortly after emergence, Pieper noted.

But even if that growing point is frozen back, soybeans have a back-up plan, he added.

"If the soybean plant is brown and soft, especially after 72 hours, the plant is probably not going to recover," he said. "But if the cotyledons are firm and green, the plant will activate [the axillary buds] and they'll take back off."

Instead of a typical first set of trifoliates, these recovered plants will have two main branches that emerge from each cotyledon node, Pieper explained. See more details on viable and non-viable soybean seedlings from Pieper here: https://www.youtube.com/….

Careful stand counts a week after the freeze event should give you a good idea of your replant needs.

Everyone has their favorite method, from the hula hoop toss to a simple row count (see more here for soybeans: https://coolbean.info/… and here for corn: https://www.pioneer.com/…).

3. KNOW WHAT POPULATION IS WORTH SAVING

A growing body of research from scientists such as Conley shows that soybeans can remain profitable at fairly low populations, thanks to the plant's famous ability to compensate for thin stands with branching.

Ellis, who has conducted on-farm population trials for years, feels confident that a soybean stand's numbers can dwindle to 50,000 plants per acre before he should seriously consider replanting.

Conley agrees, and recommends inter-planting stands under 50,000 plants/acre with a similar maturity, rather than destroying the existing stand and replanting completely. See more here: https://coolbean.info/….

For corn, many growers may find that their field's economically optimum plant population was already lower than they realized, based on modern hybrids' tolerance to population variation and a flat yield response to population in Purdue trials, Nielsen reported in an article on corn replanting.

"Based on $3.50 market price for corn, $240 seed corn, the average [economically optimal plant population] for our 83 field trials was only about 25,500 plants per acre at harvest," he reported. See the study here: https://www.agry.purdue.edu/….

When stands slip below 20,000, farmers face tricky calculations comparing the yield potential of thinner, early planted stands with thicker stands of later-planted fields. For guidance on how to weigh those factors, see this University of Nebraska article: https://cropwatch.unl.edu/….

4. REMEMBER THE DOWNSIDES OF REPLANTING

Keep in mind the cost and inconvenience that can come with replanting. Check with your seed dealer on the costs of seed for replanting, as well as the availability of your first choice, before making the decision to destroy a stand. Then consider fuel, labor and other possible costs, such as additional pesticides or grain drying costs for later-planted fields, Nielsen cautioned.

Destroying the stand with herbicides can be a complicated matter all its own, Nielsen added, since crops host an increasingly complex blend of herbicide-tolerant platforms. See more from Purdue University here: https://ag.purdue.edu/….

Above all else, keep your eyes on the bottom line, Nielsen urged. "Replant decisions ... are often difficult ones to make," he said. "Try to park your emotions at the gate and focus on estimating the dollar returns or losses to the replant decision itself."

See more on replant decisions for corn from Nielsen here: https://extension.entm.purdue.edu/… and for soybeans from Conley here: http://www.coolbean.info/…. 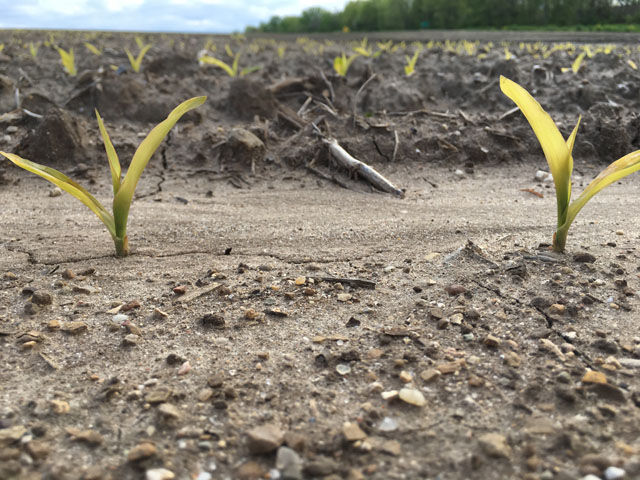