SAC CITY, Iowa (DTN) -- Three tractors and planters seeded more than 500 acres of soybeans at a northwest Iowa farm last week with no one at the wheel.

Autonomous farming has moved from the proof-of-concept stage to commercial reality for the company.

"This is the real deal ... it will change agriculture," said Sabanto co-owner Craig Rupp as he watched one driverless tractor plant while another passed nearby on the way to a seed tender to refill. "We've gone from one tractor and planter to multiple machines operating remotely at the same time."

Sabanto got its feet wet last year planting several thousand acres of soybeans throughout the Midwest with one remote-controlled tractor and planter. Rupp and co-owner, Kyler Laird, tested equipment and worked on software, networking, logistics and other issues to scale up autonomous operations in 2020.

The company's vision to solve agriculture's labor shortage with autonomous technology is being realized, according to Rupp.

"This is still a work in progress; it's hard to do," he added. "However, I do believe this will be the solution to the lack of labor in [row-crop] agriculture."

Justin Bellcock said his family is fortunate they currently have enough help for their row-crop, turkey and crop input businesses. However, he knows that may not always be the case.

That's why the Bellcocks hired Sabanto to plant a portion of their soybean acres. Seeding soybeans and corn as soon as the ground is fit is crucial to maximize yield potential for both crops, Bellcock stated. The family uses two planters to seed each crop at the same time to improve the odds.

"Labor shortages in farming will only get worse," Bellcock said. "There may be a day when we don't have the help, so I want to see this technology succeed."

Bellcock said early planted soybeans yield better, so hiring a custom operator to help is an added bonus. That's especially true if the weather delays planting like in 2019.

University of Wisconsin research shows soybean yields decrease about a half-bushel per day when seeded after April 25. Most of Bellcock's soybeans this year were seeded before or a few days after that date.

Bellcock hopes planting punctuality will result in excellent yields like last year. The family served as a Sabanto test site in 2019, and those soybeans autonomously planted in early May last year averaged more than 75 bushels per acre.

"Maybe it's not financially feasible or the labor isn't available to have a second or third planter to get crops in the ground quickly," he continued. "[Sabanto] is another avenue."

Rupp claimed the company's custom farming rates are competitive with state averages. The 2020 Iowa Farm Custom Rate Survey pegs average planting rates at $20.40 to $23.40 per acre or more depending on equipment and technology.

Bellcock was impressed last year with Sabanto's remote-operated 235 horsepower JCB Fastrac and 18-row Harvest International planter. The unit was capable of planting about 500 acres in 24 hours of continuous operation.

By today's standards, the three 60 horsepower Kubota M5660SU tractors with five-row Harvest International planters traversing Bellcock's fields weren't an impressive display of power and size. But watching the driverless units work together, and the technology making it happen, blew the farmer away.

"This is the future of agriculture," Bellcock claimed.

The three small units can plant almost the same amount of acres during a 24-hour period as the bigger tractor and planter last year. Rupp chose small implements this year because they're light, cost effective, relatively simple to retrofit and easy to move.

"One big advantage to smaller equipment is less compaction," Rupp said of the 7,000 pound units. "Logistically, we can get move them from point A to point B quickly."

If the company wanted to use larger equipment again in the future, Rupp said the technology allows that to happen. "We decided to start small to perfect controlling multiple units."

The company has come a long way since last spring when they started planting autonomously. Most notably, Rupp and Laird hired six full-time robotics engineers and equipment specialists.

"These are some of the most talented people you will find in this field," Rupp boasted. "They are capable, industrious and disciplined. After every field is planted, they evaluate what happened, what should have happened and what accounted for the differences for continual improvement."

The team outfitted each tractor with a GPS receiver, computer control box and steering actuators to control the tractor and planter. Planters are equipped with the latest Precision Planting technology such as CleanSweep, DeltaForce, vDrive and vSet.

The Sabanto team writes a computer program for a section of a field, utilizing GPS coordinates, for each unit to plant. Full autonomy is still being perfected for end rows. Units are programmed to return to a predetermined area for seed and fuel when needed.

Roboticists -- people who build, program and experiment with robots -- in the field and remotely in Chicago monitor and operate the equipment. Even though most of the team is on site in a trailer filled with technology this year, the goal is to have an off-site operator and one person on-site to deploy equipment, fuel tractors and refill planters with seed.

At times, team members complain of boredom, which Rupp said is a good sign things are working flawlessly. On a farm in Illinois, one unit worked 30 hours straight.

Software, connectivity and communication problems still occur, causing occasional downtime for units. Even though farmers are paying the company to plant, Rupp said they are still perfecting the process.

Matt Darr, a professor in agricultural and biosystems engineering at Iowa State University, said automation is part of the natural evolution of agriculture. Horses gave way to tractors, which became partially automated two decades ago with satellite guidance and auto steer.

Fully automated farm equipment will only become more popular out of necessity as equipment manufacturers and technology companies like Sabanto, John Deere, Raven Applied Technology and others perfect it, Darr asserted. Sabanto, though, is the only company at this time using autonomous equipment to custom farm for clients, according to Rupp and Darr.

"The shortage of labor in farming is absolutely a real thing," he said. "Sabanto is bringing autonomy and farming-as-a-service together. That is the evolution of custom farming."

As farmers gain confidence in autonomous technology and deem it cost effective, Darr believes they will take advantage of it. 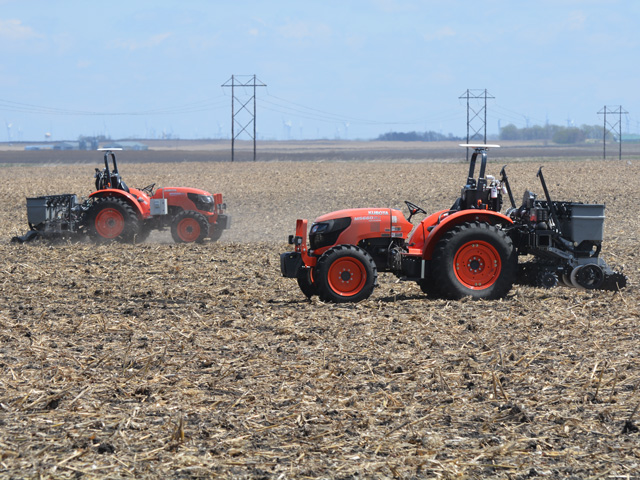