Marlin Fay has a simple descriptor for white mold. "It's ugly!"

The Grand Meadow, Minnesota, farmer has been fighting the fungi for the past six years. Disease pressure has been significantly worse the past four years, especially on long-manured fields.

One tree-lined field has become such a challenge that it is now a favorite location for the local CHS cooperative to run test plots to evaluate soybean varieties for tolerance issues.

"We carry four brands, and the ratings have different values on each," noted Fay's seed adviser, Tim Gehling, manager, CHS (Rochester) Seed. "However, with our local plots, we can evaluate them and select the right package for our members, depending on risk. I look for a combination of characteristics, including resistance, standability and branch structure."

Tom Oswald has been fighting white mold on his Cleghorn, Iowa, farm since the early 1990s. He's watched fields yielding 70 bushels per acre (bpa) drop to 30 bpa where white mold is a problem. Introduction of resistant varieties has helped, but sometimes it takes time to show up in new herbicide trait platforms.

Oswald has been tempted to move to narrow row widths but hesitates due to white mold concerns. "Wider rows do help dry out the canopy some, but I've seen 30-inch fields devastated, as well," Oswald said.

"In 2017, we were dry for eight weeks, which reduced white mold potential but also potential yield. Then, it started raining in August, and the soybeans responded, but so did the white mold."

Fungicides can help with control, but timing is everything, Oswald explained. "You never know you have white mold until after you have it," he said. "In these economic conditions, the extra cost of two applications, minimum at $40 an acre, can be hard to swallow if white mold doesn't develop."

Its erratic nature also makes it a hard disease to research, University of Minnesota plant pathologist Dean Malvick noted. "This past season, we put out trials of products in fields with a strong white mold history on eight farms around the state. We only had enough white mold at one to see an effect," he said.

Even if the right conditions are present for white mold to be present, a fungicide has to be applied before the infection starts. "If the infection has started, there isn't much that a fungicide can do to stop it," Malvick said.

He hopes Sporecaster can help. Its mathematical model evaluates field data, such as planting dates, row widths, variety, irrigation or dryland, row closure and weather. The model projects the risk of white mold developing and the potential return with a fungicide application. App users input whether plants are flowering and if rows have reached 40% of closure. It correlates that information with stored data and weather data for the past 30 days.

"What is given is a probability of risk for the location of zero to 100%," said Damon Smith, University of Wisconsin field crops pathologist. "If 40% or higher (in dryland), a fungicide application is recommended."

Sporecaster was developed at the University of Wisconsin, validated there and in neighboring states, as well as in Michigan, and released in 2018. Currently, it has been downloaded more than 3,000 times with good evaluations and generally positive results. An exception was northwest Iowa, where Oswald tried it.

"It never flagged the need to spray, and we had bad mold," he said.

"It was the mathematical model we used," Smith added. "In the model we developed, wind speed, which can dry out the plants, is one of the parameters and inversely related to prediction. However, the humidity was high enough to push white mold, but the wind speed hid that."

Smith and fellow researchers are already evaluating models to better reflect different areas and conditions. Sporecaster is designed to work in the northern U.S. and Canada.

The 30 days before infection are very important for this disease. For white mold to develop, sclerotia (the dormant stage of the fungus) must be present. Weather conditions must be right for them to germinate and produce apothecia, the tiny mushrooms that release spores that infect the plants.

If the sclerotia don't germinate, they can remain in the soil for up to 10 years, perhaps longer. This is why a hot spot can randomly flare one year but not another.

Smith, Malvick and other pathologists in the North Central Soybean Research Program are exploring other avenues of control, including germplasm, which recognizes it is being infected and puts up an active defense through the production of antifungals. They have also identified how the infection hijacks the normal production of oxidative compounds, using them to fuel the infection.

The Wisconsin team has patented a process to prevent this takeover, one which has the added benefit of enhanced drought tolerance. The problem is getting these benefits into commercial seed.

"While the enhanced resistance is now available in public soybean varieties, it has not been added to traited varieties by the commercial seed companies," Smith said.

Other naturally occurring compounds that attack the pathogen and interfere with fungal growth are also being explored. The knowledge is being applied to better understand resistance. Oswald applauds any and all new tools, and he endorses the use of soybean checkoff funds to support their development.

"Anything that can help reduce white mold pressure is worth trying," he said. 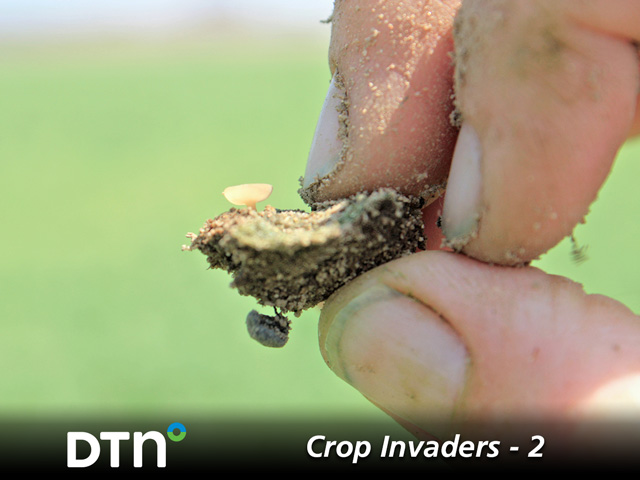