Throw a crop-production question at Brad and Jacob Wade, and it can quickly escalate into a debate.

"Are they the same thing?" his father, Brad, challenged. That comment lights the fuse. Suddenly, the two are bantering back and forth about every aspect of the soybean-production system and what equates to yield -- and to Jacob's point -- profitability?

The Wades, who farm near McLean, Illinois, nearly always come to a hearty consensus.

"We do this a lot," Brad said. "We're always asking questions."

"We're always looking for the next thing to push us to the next level," Jacob added.

Some would say yields come naturally in this part of the soybean belt. McLean County, Illinois (where the town of McLean is also located), led the state and nation in total production of corn (71.9 million bushels) and soybeans (21.5 mb) in 2018. In fairness, it is the largest county in the state, but yields tend to consistently rock here, too.

During the last few years, the Wades have seen soybean yields grow consistently, with field averages hitting the 70-bushel-per-acre mark in 2016, 80-bushel beans in 2017 and several fields hitting 90 to 100 bpa in 2018.

The father and son agree nature did a lot to push those yields higher, particularly in 2018. "Last year convinced some farmers that they could grow a lot of soybeans without really trying," Brad said. "This 2019 season may set the record straight."

Soybean farmers are finding ways to boost revenues despite market and trade challenges. This story is the sixth and last in a six-part series, More Green From Beans. The series looked at ways soybean farmers are finding ways to answer trade challenges by boosting revenues through switching up agronomics and finding new markets.

When the first soybean yield kings started adding to the soybean yield ledgers, other farmers clamored for their recipes. They still do, said Jerry Cox, Delta, Missouri, a perennial yield contest winner in soybeans and corn.

"Foliar feeding, fungicide and timely insecticides are important ingredients, but it's not as much the recipe as it is timeliness of application and reading the crop," Cox said.

His irrigated entry won the Missouri Soybean Association's yield top honors in 2017 with 101.17 bpa using a planted population of 110,000 plants per acre. He has continued to reduce populations on high-fertility fields to promote branching, going as low as 75,000 plants per acre on his 2019 plot. However, it's important to check germination rate on the seed planted before dropping that low, he pointed out.

"My best yields seem to come in years when the plant had some sort of stress very early that it fought back from," Cox added. "If I've learned anything over the past 35 years of trying to push the yield envelope, it is that the soybean has something of a mind of its own."

In other words, no matter what road map you chart with inputs and practices, weather can be an overriding factor. Plenty of sunshine before the summer solstice coupled with moderate nighttime temperatures and well-timed rains (or irrigation) tend to bring big bushels, these farmers agree.

Still, everyone knows of neighboring fields that failed to pump out the same number of pods and beans within, despite near-equal soil and weather. To that point, Wade Farms planted nearly 400 acres of replicated soybean trials this year to direct their own farm decisions and to share with local farmers through the seed sales side of their business.

Beyond inputs, row widths and populations, they are testing to see if mechanical practices such as singulation and planter pressures matter to soybeans. "The tools we now have to measure and track incremental changes in the crop are going to really change soybean production in coming years," Jacob said.

How to interpret the wacky 2019 season is still a question though. The Wades planted some soybeans as early as March 27 into 33 degree Fahrenheit soil temperature and didn't see a lot of plant growth until late May. A head-scratcher came when they found a few June-planted fields were averaging 21 to 22 nodes per plant, several more than the early-planted soybeans, which still had more pods.

"We know in a typical year that early planting results in more nodes. More nodes equate to more pods and more production," Jacob said. "I'd say we have 10% less nodes this year overall because we just didn't get the heat units."

Listening and studying the practices of yield contest winners inspired the Wades to become serious about in-field testing for both efficacy and profitability. "We've learned that simply comparing one field to another doesn't tell us much, especially when that field changes every hundred feet," Brad said. "Without replicated trials, you can easily misinterpret that something is working or not working."

Digital health imagery helps them track changes in the field, and not everything turns out as expected, Jacob noted. Fuller maturity soybeans, 3.9 relative maturity (RM), have been abandoned on the farm, for example. "They just weren't performing for us," he said, explaining that their plots now run from 2.8 RM to 3.7 RM.

"We now know that each soybean variety has a personality, and in a way, it needs to be planted and cared for. We tend to understand and make those adjustments in corn, but beans are making breakthroughs," he said.

There's no one way to pump up soybean yields. Brad and Jacob Wade like to look at the soybean decisions as a system. Beyond weather or environment, here are six steps they take to drive yields in central Illinois:

1. Genetics: Disease and other defensive resistance needs are weighed along with overall yield potential.

2. Early planting: Focus on planting in April to increase node number and number of pods.

4. Crop safety: Preemergence herbicide programs are a must for good weed control, but they select herbicide active ingredients and additives to avoid injury that can come if early planting is followed by cold, wet weather.

5. Late-season fungicide/insecticide: The top third of a plant absorbs most of the sunlight. R3 and/or R5 application of fungicide and insecticides are used to protect leaves through seed-fill.

6. On-farm research: Prove concepts/products work on your own farm before switching to a new strategy. Replicate and record findings. 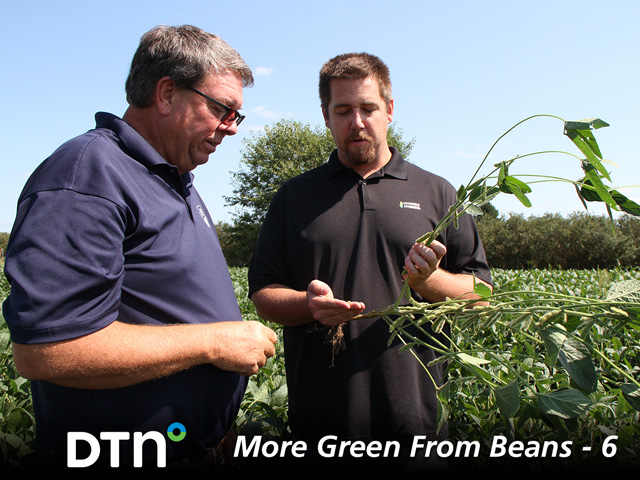