When John Werries and his son Dean started using cover crops, their primary goal was to prevent soil erosion on their Illinois farm. Seven years later, they've discovered their cover crop of choice, cereal rye, which hates weeds as much as they do.

Illinois is home to some challenging herbicide-resistant weeds, including waterhemp populations that can survive six different herbicide modes of action. But, on the Werries' farm, near Chapin, the chemicals get an assist. The Werries plant soybeans directly into thick stands of cereal rye and then terminate the growing cover crop.

"As all of the cover melts down -- and it takes a long time -- there is a mat that makes it tough for weeds to grow," Werries explained. The suppression allowed them to cut back on their herbicide use in soybeans this year, and their fields stayed clean through the end of the season.

Weed-control solutions like these couldn't come at a better time for the farming community, as it faces the spread of herbicide-resistant weeds, the costliest threat to soybean production today.

Weeds gobble up light, water and nutrients available to soybean plants, and have the capacity to rob more yield than insects and disease combined. One recent study by the Weed Science Society of America estimated that if left uncontrolled, weed pressure in soybean fields could drop yields by more than 50% and cost the industry $16 billion a year.

Soybean growers are fighting to keep that yield in their fields, but it comes at an increasingly steep price, as more weeds outsmart chemical modes of action each year. With new herbicide-tolerant soybean technologies barely keeping ahead of the development of resistance, growers are facing some stark truths about the future of weed control, University of Tennessee weed scientist Larry Steckel explained. Alternative weed-control methods, such as cover crops or hand-weeding, are going to be part of the future, he said.

"We built these big farms on the assumption that you could go across a thousand acres with a boom and kill every weed, and that's just not working anymore," he said.

WEED COSTS ON THE RISE

Long gone are the days of making one or two passes with Roundup and parking the sprayer, Mississippi State University weed scientist Jason Bond noted.

"Weed-control costs are at their highest since the pre-Roundup Ready era," he said. He estimates that between burndowns, preemergence residuals and early- and late-postemergence applications, Mississippi soybean growers spent an average of $119 an acre to control weeds in 2018 compared to just $36 an acre in 2008.

New herbicide-tolerant technologies, such as 2,4-D-tolerant Enlist and dicamba-tolerant Xtend soybeans, have offered some relief, but the steady march of chemical resistance lies ahead.

Where John Lindamood farms in northwestern Tennessee, the first signs of possible dicamba resistance are already sprouting in Xtend soybean fields that were clean the two previous years. Steckel estimated soybean growers there are spending at least $50 an acre to control weeds, and dicamba resistance could drive that upward quickly.

"We're spending every bit as much as what we spent when Roundup failed," Lindamood noted. "Now, we're just using different products and struggling to figure out how to keep pigweed from becoming resistant to them, too."

RESISTANCE FROM AGGRESSIVE AND ADAPTABLE WEED

The first glyphosate-resistant Palmer amaranth pigweed was confirmed in Georgia in 2005. This aggressive and adaptable weed has confirmed resistance to five other herbicide modes of action, as well: PPO inhibitors, ALS inhibitors, HPPD inhibitors, microtubule inhibitors (dinitroanilines) and triazines (atrazine).

Likewise, individual waterhemp populations with resistance to six herbicide modes of action have been documented, and herbicide-resistant marestail, giant ragweed and kochia are close on its heels. Most recently, herbicide-resistant grasses such as Italian ryegrass or barnyardgrass are becoming a serious problem in some Southern states, Steckel and Bond agree.

This newly discovered type of resistance could allow a weed to outwit not just one type of herbicide but many, including herbicides they have not yet encountered, Hager said. Essentially, it has the potential to jeopardize predictable chemical control of weeds in the future.

The good news is that even the newest and scariest herbicide-resistant weeds can't withstand one of the oldest weed-control tactics in human history: hand-weeding.

Armed with hoes, workers move through infested fields one row at a time chopping or pulling each resistant weed escape as they go. Up-front costs are high -- the final price can run well over $100 an acre -- but it worked to clear up fields infested with glyphosate-resistant Palmer amaranth a decade ago, and it appears to be happening again, Steckel said.

"I'm seeing hand-weeding crews out again for the first time since Roundup first failed," he said.

The use of cover crops to control weeds is also growing. Like hand-weeding, it has up-front costs, usually between $10 to $20 an acre for seed alone, but the benefits are proving far more valuable for some.

"We have been sowing cover crops on every acre since 2012," Werries said of the Illinois operation. They have found success with "planting green" -- the practice of planting soybeans into a live, growing cover crop. "We sow the cover into 10-inch rows and plant beans in 20-inch rows," Werries continued. "With active guidance, we are able to plant the beans in between the cover-crop rows."

Anywhere from one day to a week later, they burn the cover crop down with glyphosate and let the dying biomass do its work.

It can be a risky endeavor, especially in wet springs like 2019, when fieldwork windows are few and far between. But the Werries actually found that the growing rye sucked a lot of moisture out of the ground, and the cover helped support heavy machinery.

And the end result? Well, it spoke for itself.

"It saved one trip across the field and some herbicide dollars," Werries said. "And, there was not a weed anywhere." 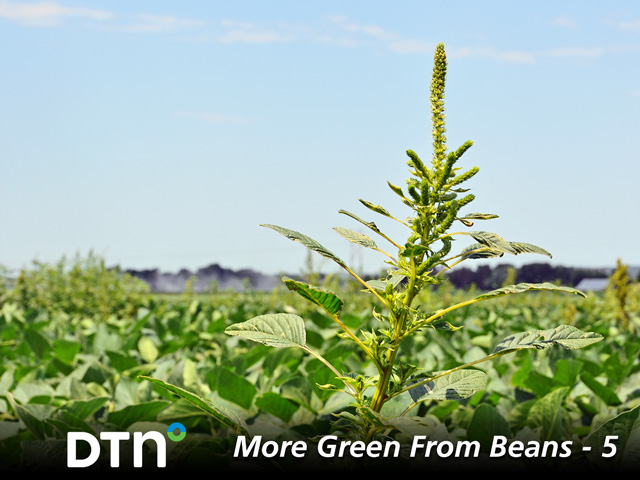