As he looks across his fields spanning the flat terrain of northern Iowa, Mike Riggert isn't just seeing rows of soybeans. He's thinking about ways to adjust his seeding rates.

"For years, we planted a flat rate of 150,000 seeds per acre, but we've definitely cut back on seeding rates in the last two or three years," said Riggert, who farms with his brother, Brian, near Whittemore.

"You can get good yields with lower planting populations if you pay attention to detail," said Dan Bjorklund, seed team leader for MaxYield Cooperative, which serves the Riggert farm. "Mike planted slow enough to singulate, and he's counting 80 to 100 pods per plant where the seeding rate is 120,000."

Riggert saw no yield loss with his lower planting rates in 2018. "Those areas didn't yield more than expected, but they yielded the same as when we used higher seeding rates in years past. We came out ahead, because we didn't plant more seeds than necessary."

"I've been in this business 20 years, and farmers have talked about soybean seeding rates every year," stated Seth Naeve, a University of Minnesota Extension soybean agronomist. "The thing to remember is that different fields respond differently to various planting populations."

Soil type, soil fertility and weather conditions affect final stand establishment. "We don't look at variable-rate seeding as a way to get more soybean bushels," Naeve added. "It's really a way to save on seed costs."

Joe and Suzanne Shirbroun have found this to be true on their northeast Iowa farm. They began experimenting with various soybean seeding rates in 2015 through the Iowa Soybean Association's On-Farm Network, which offers research opportunities focused on agronomics, cropping systems and more.

"Standability issues pushed us," said Joe Shirbroun, whose fields near Farmersburg are defined by rolling hills. "We were growing high-yield beans, but they were falling down."

The Shirbrouns, who plant in 15-inch rows, had been seeding a flat rate across all their soybean acres to get about 150,000 plants per acre. "We didn't realize that having planting prescriptions would pay for soybeans like they do for corn," said Amos Troester, the Shirbrouns' Pioneer seed associate.

The Shirbrouns began experimenting with lower plant populations in higher-yielding environments. "We can get down to 90,000 plants per acre in the low-lying areas, while our highest seeding rate is about 160,000 in other areas," Suzanne Shirbroun said. "We didn't see any yield drag with the lower seeding rates. Our yields were maintained, or they went up."

How does geography affect soybean seeding rates? A series of studies financed by the United Soybean Board was conducted in 2012 and 2013 across the Midwest and Mid-South to examine high-input soybean production practices. Results showed that maximum yields were obtained between 100,000 and 165,000 seeds per acre across all nine states.

In the southern states (Arkansas, Kansas and Kentucky), seeding rates between 130,000 to 170,000 seeds per acre were needed to obtain maximum yields. This response was consistent across production systems, regardless of whether they included a large number of yield-enhancing treatments like seed treatments, fungicides, growth promoters, etc.

Don't get too concerned about specific prescriptions, however, he adds. Keep things simple, agrees Shawn Conley, a soybean and small grains specialist at the University of Wisconsin. "It's not worth your time and money to hire someone to write a planting prescription. Buy a bag of seed per acre. Each bag contains about 140,000 seeds. Plant 120,000 seeds in higher-producing areas and 150,000 seeds in lower-producing areas."

Maintain a good soil-fertility program focused on potassium -- a vital nutrient for soybeans, Conley said. Plant seeds 1 to 1.25 inches deep, ensuring good seed-to-soil contact. Also, plant as early as possible, as long as soil conditions are fit. "You get one chance to do it right," said Bjorklund, who noted that mudding in beans can cause compaction, which can hinder seedlings from emerging evenly.

Riggert began planting his 2019 beans on April 25. "This was much earlier than ever before," he added. "The earlier-planted beans at lower populations have been superior, though, when you start counting nodes and pods."

Control weeds by using pre-emerge programs, multiple modes of action and a residual program to manage yield robbers such as waterhemp, Conley said. "While farmers get bored with the basics and want to talk about applying nitrogen or using molasses to boost soybean yields, the basics still matter the most," Conley said.

As for seeding rates, start small if you want to try cutting back. "Take baby steps," Joe Shirbroun advised. "Take 20 acres of your farm, and learn from that." 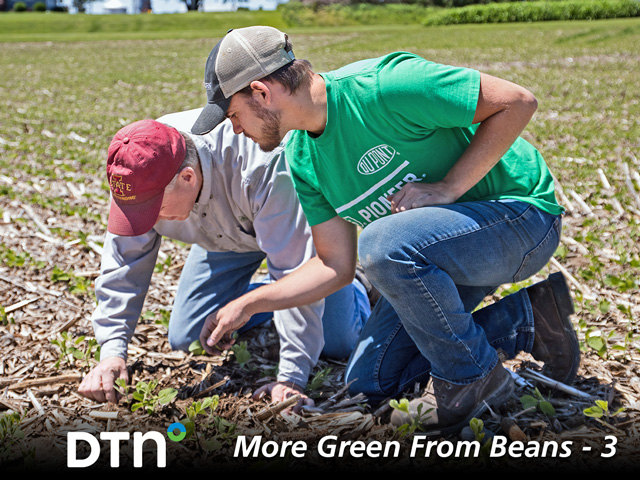