ROCKVILLE, Md. (DTN) -- Forget the old fable about the turtle beating the rabbit. "Slow and steady" may finish the race this year, but it probably won't win it.

Oh, and the turtle is really, really sick of being wet.

When DTN reached out to its Agronomy Advisers to check in on harvest progress in the month of October, the word "rain" surfaced more than a dozen times -- "snow" was a close second. And when asked about yields, "average" was the most common refrain.

The Agronomy Advisers is a group of trusted farmers and ranchers that report back on farm operations and current ag events each month. This month, they are trying to start looking ahead -- to winter wheat seeding, fall tillage, herbicide applications, fertilizer spreading, cover crops and more.

But most are also still slogging through harvest as November blew in, with a unwelcome smattering of snow for some. Frankly, that seemed pretty on brand for the year, noted Kyle Samp of north-central Missouri.

As expected, a few Agronomy Advisers are finding a below-average crop in their fields. Ohio farmer Keith Peters, whose state was one of the hardest hit with summer flooding, is seeing fields come in five to 10 bushels below average. Josh Miller, who only planted a fraction of his intended acres in southern Illinois this year, said both corn and soybeans were running below his APH (actual production history) -- with more rain on the way.

However, the majority of the responding farmers reported that their fields yielded better than expected. Then again, expectations were historically low.

Kenny Reinke, of northeastern Nebraska, is reporting corn and soybean yields "right at APH or slightly above." That's down from last year's binbuster crops, but far better than he could have dreamed of when a historic spring flood was washing fields, roads and bridges away in his state this past spring.

In Ontario, Canada, farmer Dan Petker said soybean yields are riding a rollercoaster this fall. "Yields are highly variable as you go across the province, by county -- anywhere from 20 bushels (well below average) up to 65+ bushels (well above average)!" he wrote.

Others discovered soybean's impressive abilities to compensate for a variety of ills, from late planting to poor stands. Samp planted soybeans deep into June. By late August, they were still putting on flowers. But against all odds, they packed on pods and are yielding well. "Beans might be considered a bit of a surprise," he said. "I don't think it will be the best year we've had, but definitely top three."

As for corn, flash droughts this summer and late planting seem to keeping yields closer to average.

Most Agronomy Advisers were underwhelmed by their corn crops, with the exception of Illinois farmer John Werries, who expects his corn to yield 40 bushels above his APH, and Arkansas farmer Charles Williams. "We were pleased with our corn yields," Williams reported. "Soybean yields were average to mediocre. We had a very small acreage of rice and were pleased with yields."

And of course, no amount of average or above-average yields can fully replace the nearly 20 million acres of corn and soybeans that simply never got planted this year. Many Agronomy Advisers had some prevented planting acres this year, ranging from a single field to the majority of their acreage.

For example, Jeff Littrell, who farms with his son in southeastern Minnesota and western Wisconsin, is thrilled with his soybean yields, but he and his son never even got to plant corn this year. "There are a lot of unplanted acres in our area," he said. "Most corn has been chopped here for silage."

FIGHTING NATURE ALL THE WAY

Harvest conditions are far from ideal for many Agronomy Advisers. Beyond the southeast region of the U.S., where drought is deepening, most growers received unwelcome rain and even snowstorms this past month.

Samp is fighting mud and stubborn soybean stems in Missouri. "The beans have been really difficult cutting -- the stems are still green and tough," he reported. In Arkansas, William's cotton harvest is stalled due to more than 6 inches of rain in the last two weeks.

Corn standability issues are on display for others. "Stalk quality on some of the hybrids is getting to be pretty questionable especially on the earlier planted corn," said Reinke. "It's not lodged bad yet, but we're definitely keeping a close eye on it. Especially when strong winds can be very common."

Likewise, Petker is bracing for the windy season in Ontario. "Along the north shore of Erie, we are starting to get strong fall winds which has already lead to lodged corn," he said. "Stalk strength and standability will be an issue for the rest of November" or whenever harvest finishes.

Many Agronomy Advisers reported a more successful winter wheat planting season this year. "Ontario has had such an incredible fall for seeding winter wheat, my own acreage increased this year" when compared to last year, Petker said. "In fact, the fall was so nice for seeding I had a hard time stopping."

Keith Peters also had success sowing wheat and rye in Ohio this fall, and in Illinois, Miller managed to get a few hundred acres of wheat in despite his soggy field conditions. In Minnesota, however, Littrell lost half of his September-sown wheat acres to a 5-inch deluge of rain. "We replanted almost a month later," he said. "So not sure what will come of it this summer."

Werries, his son and his small crew of employees have pushed hard -- even pulling overnighters -- to sow every acre with cereal rye cover crops after harvest. "We sow every acre of ours and some custom seeding for four other farmers," he noted. "It is tough to keep up." This year, they finished at 6 a.m. last Saturday, two hours before a gentle 0.8-in. rain -- perfect timing.

Most other fall activities remain on the to-do list for the Agronomy Advisers. Werries is waiting on cooler soils, hopefully next week, to strip till and apply anhydrous ammonia. Samp and his father, who have applied fall herbicides every year for a decade, are anxiously watching that application window narrow. "We would really like to get some fall herbicide put down this fall, but field conditions and a slow harvest haven't really allowed for much work to be done," he said.

In Nebraska, Reinke must race to put fencing up so he can run cattle on his corn stalks this winter. Petker's operation in Ontario needs some rut repairs, but first he has to tackle fall fertilizer. "Our biggest job is to get fall fertility done," he said. "Now we have the spreaders basically following closely behind the harvest team in order to minimize our time in the fields over the fall."

In Ohio, Peters has a long list of tasks ahead -- fall herbicides, some strip tilling, fertilizing and collecting soil samples to measure nutrient levels. He's eager to get them done and finally bid farewell to 2019.

"I'm just thrilled to get this year and last fall behind us," he said. "I've never been as frustrated as I've been these last 18 months." 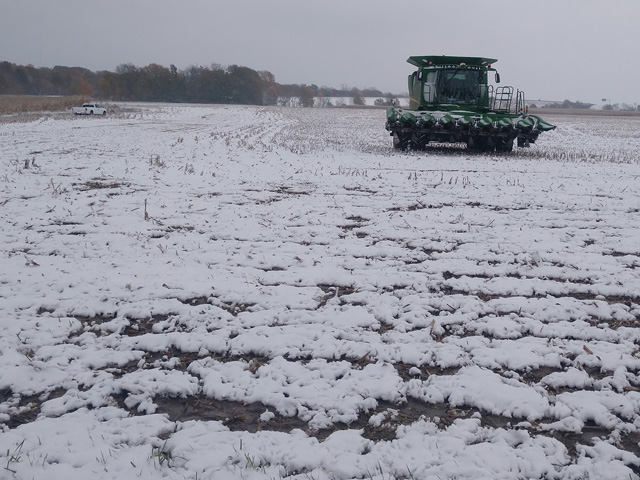