ROCKVILLE, Md. (DTN) -- The threat that has been building throughout the spring and summer is finally imminent.

A major winter freeze and snowstorm looms for the northern Midwest, where many corn and soybean fields have yet to reach maturity. See the DTN story here: https://www.dtnpf.com/….

Once the front passes, growers with freeze-damaged immature crops will face a host of harvest challenges. Experts recommend that growers in this situation prioritize freeze-damaged fields for harvest, adjust combine settings carefully and plan for high-moisture, low-quality grain.

Growers with very late-planted soybean fields may need to take the time to assess if their field is still worth harvesting for grain after a freeze, Staton said.

"The conventional wisdom from agronomists is that if soybeans are in the R6 growth stage at the time of the freeze, they are salvageable," he said. "Before then, they are likely not." See more on that topic here: https://www.pioneer.com/….

For salvageable soybean fields, as well as cornfields, prioritizing freeze-damaged crops for harvest will be essential, Staton and Licht both stressed. While the immature crops will almost certainly be higher moisture than preferred, the risk of letting the damaged grain stand in the field may quickly outpace the inconvenience of wetter grain.

"The longer we leave freeze-damaged corn in the field, the greater in-field loss will be," Licht said. "You'll start seeing things like lodging and ear drop increase."

As soybeans sit through wetting and drying cycles of normal fall weather, their seed pods become more brittle and prone to shattering, Staton added. Waiting for green soybeans to dry out and mature in the field puts growers at high risk for losing yield from more mature soybean plants in the field, he warned. Staton recommends harvesting freeze-damaged soybean fields at moisture levels as high as 16% to 18%, if necessary.

Harvesting freeze-damaged grain requires combine adjustments. First, if large amounts of wet snow sit on top of corn and soybean fields for more than a few hours, lodging will be a near certainty, both scientists noted. See more on harvesting lodged corn and soybeans from the University of Minnesota here: https://blog-crop-news.extension.umn.edu/….

Growers who rush to the field to get freeze-damaged corn out may also face tougher, greener stalks, Licht said. Cobs will be wetter and more easily broken, so growers may need to adjust their cylinder speeds carefully. They may also need to adjust their settings to account for lighter weight corn kernels that didn't have enough time to fill, he added. See more From Purdue University here: https://www.extension.purdue.edu/….

Freeze-damaged soybean fields will likely hold a mix of green soybeans and mature soybeans, added Staton. "So you want to have your settings such that you can thresh the immature beans out of their pods without smashing them or crushing them," he said. "That's a challenge and relies on two settings: the clearance setting and the rotor speed, or cylinder speed."

A good rule of thumb for all soybean harvesting, but especially with green-stemmed or lodged soybeans, is maintaining the cutter bar carefully, Staton added. "All knife sections need to be sharp and tight and the guards -- which are commonly overlooked -- have to be aligned properly," he said. "Think of it like a pair of scissors -- if one blade is sharp, but the other side is dull, it won't cut!"

To add to the issue, daily grain-drying rates drop sharply in the Cornbelt as the days shorten and turn cool in October. That means mechanical drying will be necessary for most growers with freeze-damaged fields. For more details on the challenges of harvesting wet, immature grain this fall, see this DTN article: https://www.dtnpf.com/….

Quality issues are also likely. Prematurely killed corn kernels will be much lower test weight and more prone to spoiling in storage, Licht noted. "We're talking about test weights below 52 pounds per bushel and maybe even in the mid-40s," he warned. Immature, freeze-killed kernels may also have lower protein content, which can make them less desirable as livestock feed, he added.

Licht urged growers not to mingle their low test-weight, freeze-damaged corn with better-quality corn. "If you put them together, you risk losing quality on your higher-test-weight corn," he warned. "I would recommend taking freeze-damaged corn to a point of sale immediately, since its storability will be much lower."

If you must store it, dry it down farther than normal, as low as 13%, to account for the moisture gradient that exists in immature kernels and to help limit spoilage, Licht added. "In a wetter kernel, there is greater difference in moisture between the outside and the middle of the kernel," he explained. "If you shell immature corn and test it, it will test 1% to 2% lower than it actually is, because that test is not capturing higher moisture content in the middle of the kernel."

Freeze-damaged soybeans are more likely to have a thinner, more fragile seed coat and lower vigor and shouldn't be harvested for seed use, Staton said. Immature, green soybeans also pose a problem for end-users, as they can affect the color and quality of the soybean oil. Growers can face hefty dockages or have loads rejected for a high percentage of green beans.

If possible, Staton recommends trying to store and aerate green soybeans to remove the color. As with corn, the recommendation is to dry immature soybeans down lower than usual to 12%, as green soybeans can distort moisture readings.

For more details on the final reproductive stages of soybeans and the impact of a freeze, see this article from the University of Nebraska: https://cropwatch.unl.edu/….

For a comprehensive look at harvesting, drying and storing freeze-damaged corn and soybeans, see this guide from Purdue University: https://mdc.itap.purdue.edu/…. 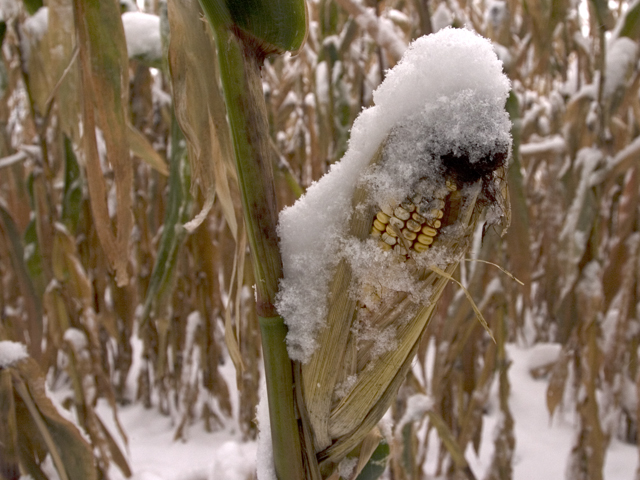