The model involves Bayer setting an expected yield outcome for a product or seed, based on a farm's data and history stored on the company's digital ag platform, FieldView, as well as the company's own research on their products. If a farmer's final yield falls below that expected value, the company will rebate a certain portion of the original price of the product. If the yield instead surpasses the initial set value, the farmer shares a pre-agreed portion of that additional income with the company.

Many farmers have posed questions and expressed concerns regarding aspects of the model on social media this week. So DTN sat down in Germany with Sam Eathington, chief science officer of The Climate Corporation, a subsidiary of Bayer, to address these questions.

Here is the resulting Q&A, lightly edited for clarity.

Q: What is the status of Bayer's outcome-based pricing model in the U.S. today?

A: Bayer launched the pilot in 2019 to provide farmers the opportunity to make data-based decisions to optimize their resources, inputs and yield potential while managing risk on their farms. It's a pilot project and we're learning ourselves if we can create a model where there is more risk protection and opportunity to share more upside. How would that work? How would it be structured?

Q: Will this become a mandatory pricing structure for all Bayer customers in the future?

A: The simple way to answer that is we're not forcing a farmer to do anything. They clearly have choice in how they want to buy inputs and who they want to buy them from. It's not a mandate. I think there will be a whole distributional response among farmers out there, that -- depending on their financial situation, how they like to buy their inputs, who they want to work with -- you can imagine a full range of responses there.

We tested a number of different financial models in this pilot this year about how much downside protection the farmer wanted versus how must upside sharing they wanted to do. The farmers could run lots of different scenarios across the farm and choose where they wanted to go. There were caps on some of the models [on the upside], where you can say we'll share at a certain percentage, and if you go beyond that, we're not sharing. There were others where we continued to share. So there was a broad range of how the upside and the risk protection varied across the models. A very large percentage of the farmers went to one type of model. It was cool to see how that happened. That's part of what we're learning -- what is the right balance? Because the downside risk in a bad year can be pretty detrimental to you, so do have to understand what's the cash flow, what are the bank notes that they have to manage.

Q: How will this change how Bayer uses farmers' data?

A: Our data privacy policy is the grower owns their data and they determine who they share it with, whether it's a seed rep or maybe a fertilizer rep. [What we ask] is if you share it with us, we're going to use it to build new models that can be used for all the farming community. We're very transparent about that.

With the outcome-based pricing, we did have to do an additional policy with those [participating] farmers, because our current data use policy says we won't use the data for pricing. That's one of the things we absolutely call out in Climate FieldView. But now with outcome-based pricing, we need to use the data for pricing. In the pilot this year, we actually went to each and every farmer involved and had a new data privacy policy with them that explicitly said we are going to use this data to figure out pricing, because it's outcome-based pricing. And in that case, we had over 90% of the farmers we talked to agree to go ahead and participate in the pilot. It's still their choice. In no way are we mandating that they have to do this.

A: There a couple ways in the program to do that. Let's take fungicide for example; we had a pilot on that this year. In that case, we would say, hey, we think this field would benefit from a fungicide application and we think you'll get this amount of yield protection if you spray this fungicide. So in those pilots, the protocol was an unsprayed strip in the field. We tried to work with the farmers to say how big it should be, where you should put it in the field -- you don't want it on the edge next to the trees or something like that. You want it in a fair place for both the farmer and the technology. That was all tracked in FieldView. And in that case, you're just measuring the difference. What is the spray check versus the unsprayed check? And if achieved expectations, then that's great and if it was below that, then we would rebate them in that program.

When you get into some of the more complex ones, like doing a pure outcome-based pricing, then you have to start thinking about how is the combine calibrated, and we worked on that protocol with the farmers. We're going to still do a true-up with weigh tickets, you know every farmer has to do their APH (actual production history) reporting anyway. So there's still some checks in the system to make sure it's really being correct and fair to everybody who is participating. There may be some gaming of the system and that's part of what we have to learn. But there is new technology like this auto-calibration that a lot of equipment companies are coming with in their combines. Those are really good and it takes that extra complexity out of the farmer's process. The machine is constantly calibrating itself. I can see technology like that coming along with these sort of programs.

Q: How does this model avoid rewarding Bayer for individual farming practices (beyond the company's seed and products) that might increase or influence yield, such as tiling, crop rotation or tillage practices?

A: Think about it this way. Let's use the tile example. Say a farmer put tile in this field 10 years ago and by putting tile in, they drained the field and it yields better there. So what you would see is their average yield should be increasing and will be at a higher rate over time. Now let's say we come along and want to do outcome-based pricing. We use their base yield level as the baseline, and we're saying our technology would give you incremental yield. So if your base is already 200 bpa, and now I think my seed adviser will give you an extra 5 bushels, it's 205 bpa we're talking about. I don't go back to the yield you were getting 10 years ago before you got tiling, say 180 bpa, and try to capture the [difference between] 180 and 200 bpa that you get from tiling. We're not doing that.

The only watch-out then that the program has to account for is if a farmer makes a change in the middle of the process. For example, the history on this field for the last 3 to 4 years of data, there was no tile in the field, but then this fall, they went ahead and put tile in field. Those are the fields we have to actually account for differently because we're not trying to capture [your investment in tile]. We're not trying to do that at all. We're basically saying our technology is bringing you this incremental yield, and that's what we're talking about sharing and protecting on the downside. As long as their practice has been consistent the last three or four years, we're not capturing that potential value.

Q: Can growers who participate use competitor products on their fields or are they locked into Bayer-specific products?

A: This year's pilot was mostly on seed and we know more about our seed right now than we do our competitors'. We were using, for example this year, DeKalb corn seed, but if you wanted to use a competitor's fungicide or herbicide in the program, we didn't care. We were just doing seed at this point. I think down the road -- and we're not there right now -- but as we're get more and more information, I think you're going to see a world where there are scenarios about products that give customers more choice and they probably just come with different pricing and risk/reward scenarios. Because we're going to know more about our products than our competitors' products, and we might not be willing to guarantee as much [yield] with a competitor's product. We haven't figured any of that out. That's part of the learning process we're in right now.

Q: Will Bayer ever mandate other farming practices beyond seed, chemicals, or other inputs in outcome-based pricing agreements?

A: I would say we would never mandate -- that's a pretty harsh word. We would probably give you the best recommendations and then figure out a way financially that it is still your choice, but it's a financial choice. For example, if we think no-till makes this hybrid yield more and is better, but you say there's no way I want to do no-till, then we just factor that into our [yield] predictions. Farmers are always going to have choice in the system. 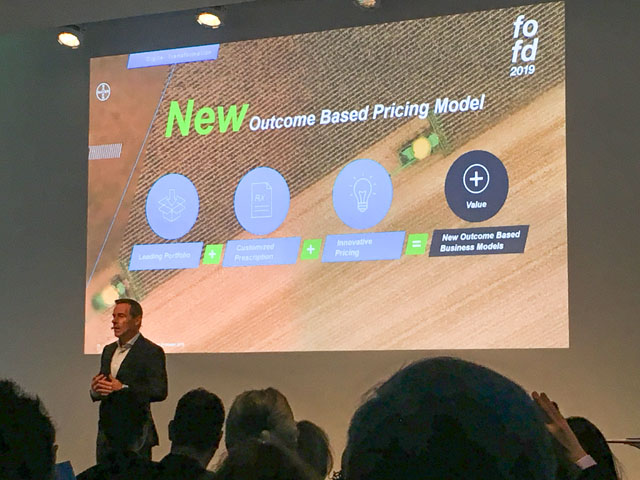