MONHEIM, Germany (DTN) -- Liam Condon's highlight reel of Bayer's first full year after its integration of the seed and agrichemical company Monsanto has some dramatic swings.

On the upside, Condon, president of the Crop Science Division of Bayer, presented a company better positioned to launch new products and collaborations in the years to come. Freshly equipped with Monsanto's portfolio, Condon and others highlighted potentially industry-disrupting new products from novel crop varieties to brand new biotechnology companies at Bayer's annual Future of Farming Dialogue taking place in Germany this week.

On the downside, Condon acknowledged the challenges the company has faced from high-profile lawsuits and court decisions against glyphosate, amid a growing movement of consumers concerned over chemical use in agriculture.

"I think it is something that we're very clearly confident will ultimately be solved, and we took key note of the fact that EPA has clarified that it is not allowed to put a cancer warning on Roundup in the U.S, because that would be fraudulent for consumers because of the lack of scientific consensus," he told conference attendees.

The Future of Farming Dialogue brought attendees to Germany from 40 different countries, including farmers, media -- including DTN -- and other ag industry stakeholders. During the presentations, the company took care to use a broad lens to present Bayer's successes and challenges within the larger context of a growing population, volatile trade environment and changing climate. The company has made a commitment to reduce field greenhouse gas emissions by 30%, reduce its environmental impact of its crop protection sector by 30%, and empower 100 million small-holder farmers.

"The real challenge for agriculture as we see it is how we feed a growing population without starving the planet," Condon explained.

One of the first new products showcased at the Future of Farming Dialogue was Bayer's new short-stature corn project. The company has used both GM (genetically modified) and traditional breeding techniques to produce hybrids that are shorter and less prone to lodging, green snap and wind damage, which can cause major yield loss.

"It sets up a whole new platform for our breeding programs to breed this unique phenotype of short-stature corn," said Bob Reiter, head of research and development for the Crop Science Division of Bayer. "We can continue to increase the overall number of plants, the density of the crop, on every acre. And that will lead to more yield."

The company is testing their first short-stature hybrid in Mexico this year, and hopes to test this type of corn farther north in the next few years, Reiter said. "My belief is this is going to be a blockbuster, but we've still got a lot of work to do," he added.

Condon also highlighted Bayer's new outcome-based pricing system, which the company is running a pilot program on in the U.S, in the hopes that it will become a new pricing paradigm in the industry.

The system involves guaranteeing farmers a yield or outcome from seeds or other inputs. If the farmer falls below that outcome, they pay less for the original input. If they surpass it, they share some of the profits with Bayer. "This is something that we are trialing in the U.S. currently," Condon said. "And initial results look extremely promising. We're expecting to roll it out in the next few years."

Condon also showcased the company's willingness to collaborate with a range of outside institutions specializing in agricultural development, from universities to small tech start-ups. Most recently, Bayer is collaborating with a medical biotech company, Arvinus, to launch a new biotechnology company named Oerth Bio. Supported by intellectual property from both companies, as well as a $55 million investment from Bayer, the company will specialize in targeted protein degradation technology. Originally deployed in medicine, the technology allows researchers to deploy small molecules, or protein degraders, to attack and destroy target proteins, rather than finding and manipulating a gene that controls the protein.

"It's very specific -- it puts certain proteins into what we might call the cellular waste bin; it doesn't switch them off, it actually erases them," explained Alex Trautwein, head of research and development for small molecules in Bayer's Crop Science Division. "We believe this can be very specific to certain plants, like resistant weeds, insects or fungi which are detrimental to plant health, but without harming humans or the crop we're applying them in or the environment."

Likewise, JoynBio, a joint venture between Bayer and biotech start-up Gingko Bioworks, is taking on the holy grail of agriculture -- non-legume crops that could fix their own nitrogen from the soil and air. See more here: https://joynbio.com/….

In the background, a legal and social battle over proper chemical use and stewardship is raging, from lawsuits claiming glyphosate has caused cancer in the U.S. to a recent proposal to phase out glyphosate use by 2023 in Bayer's home country of Germany.

Bayer stands behind the safety and value of glyphosate and is prepared to take the litigation in the U.S. to the highest court, if necessary, Condon told reporters.

"We have had three [initial] verdicts against us," he said of the trials. "They are all going on to appeals, and there might be multiple appeal levels and it's very well possible it might end up at the Supreme Court, particularly if we're being challenged that we have failed to warn about the potential carcinogenic impact of the product," he said. "Whereas, at the federal level, EPA has clarified that nobody is allowed to put a cancer label on the product because that's not in line with scientific consensus. ... We are prepared to go through the entire court system and see this out."

It is also possible that Bayer could settle those lawsuits, if the cost to settle proves less costly than the long, complicated process of multiple appeals.

"Regardless of which option works, our base assumption is that glyphosate remains available for growers," he added.

As for the proposed Germany ban by 2023, Condon noted that it was announced by government officials as a proposal and has no legal force. The European Union has until 2022 to make a decision to re-register glyphosate or not, however, and Bayer will work to ensure it remains a legal product for European farmers, he said.

"We are completely committed to making sure farmers all around the world have access to glyphosate," he said.

Bayer recently announced a $5.6 billion commitment to weed control research, with the goal of finding options for farmers that can complement glyphosate and other chemicals in the company's portfolio.

The litigation and continued controversy around chemical use in agriculture has driven one important point home for glyphosate's new owners, Condon admitted.

"The importance of diversity is the core lesson that comes out of this," he said. "For crop protection, that means rotating active ingredients. If you constantly use the same product again and again, you are going to get resistance, and the product at some stage is no longer effective. ... So this is part of the stewardship measures that we need to be very vocal about and make sure that growers understand the options they have available and that they aren't over-relying on only one type of approach."

See more about the Future of Farming Dialogue here: https://www.bayer.com/…. 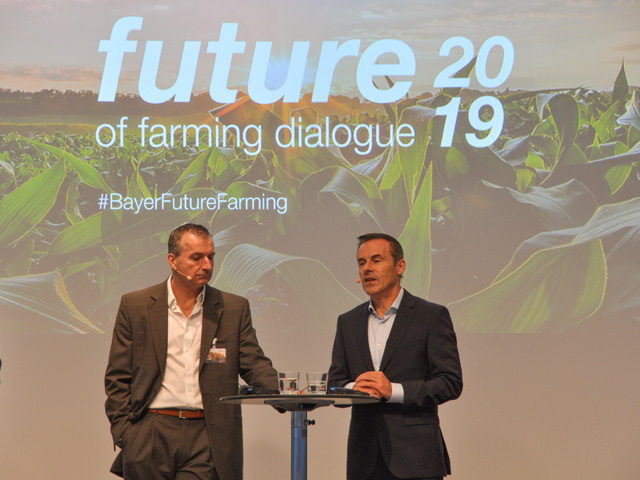