ROCKVILLE, Md. (DTN) -- The long-awaited 2019 harvest season is slowly getting underway, and it promises to be a long, memorable effort for Midwest farmers.

"Corn harvest is going to be a strange animal this year," noted Nebraska farmer Kenny Reinke. "It's going to be really spread out due to planting dates."

Reinke, like many growers this year, is facing unprecedented delays in his crop's development. Less than 30% of the nation's corn crop is fully mature -- down from nearly 70% last year, according to USDA NASS' Monday Crop Progress report. Only 7% of the corn harvest is finished, much of it in the southern half of the country.

This month's dispatches from the DTN Agronomy Advisers, a group of trusted farmers and ranchers who report on fieldwork and current events in ag, reflected this slow, shaky start to the fall harvest season.

In Southern regions, the corn harvest is wrapping up as farmers turn to soybeans, cotton and other crops.

Farther north, the few farmers getting into the field are reporting a drop-off in yields from last year's highs. But most Midwest growers, stalled by immature crops, are in a holding pattern, monitoring the health and standability of fields and praying their crops' weather woes are finally behind them.

SMOOTHER SAILING IN THE SOUTH

Many of the Southern states dodged the endless rains and slow planting progress that plagued the Midwest and Great Plains this year. In fact, much of the Southeast and parts of the Midsouth are now facing moderate to severe drought conditions. As a result, corn harvest is moving along at a normal pace there. Even in Arkansas, which actually experienced major flooding earlier in the season, the state had harvested 82% of its corn acres by Monday, Sept. 22 -- very close to last year's pace and the five-year average pace.

"We've completed corn harvest, harvested a little over 10% of the bean crop and will begin cotton harvest in the next couple days," said Charles Williams, a farmer in northeastern Arkansas. "Overall, yield reports for corn, beans and rice have been for a good, average crop so far. It's hard to say how much, if any, the later-planted crop will drop off."

Likewise, Reed Storey of east-central Arkansas was finishing corn harvest and expecting to start soybeans in just two weeks. "We aren't having a record crop, but we're pleased," he said.

Farther north, some farmers in Illinois, Indiana and Missouri are just starting to run combines through their early planted cornfields.

"It's a real testament to what an odd year it's been when I'm harvesting corn when half of my corn isn't even mature yet," noted Kyle Samp, of north-central Missouri. "Moisture was running 20% to 23% and test weight has definitely been on the lighter side." Yields from those early fields were above average, but the other 75% of his corn crop will be extremely variable, Samp added.

In west-central Illinois, John Werries was nearly halfway done harvesting his corn crop, mostly his 108-day to 114-day corn, which was running at 25% and 23% moisture, respectively. "Our whole farm average will be 10 to 15 bushels behind last year," he estimated.

Farther east, central Ohio farmer Keith Peters has also started his corn and soybean harvest, and is finding both crops running 20 bushels per acre (bpa) behind last year's yields. "I think my corn yield is going to suffer from light acres running out of water and low areas drowning out or running out of nitrogen early," he said.

THE LONG WAIT IN THE NORTHERN CORN BELT

Farmers from Nebraska, Iowa, Minnesota and Ontario reported no harvest progress. Crops there are far behind in development, and disease is taking its toll on the health and standability of some fields. Most farmers said development and harvest are running anywhere from two to four weeks behind normal.

In Ontario, many cornfields are still six weeks from harvest -- and some clearly won't make it, said farmer Dan Petker. "Certain areas with extremely delayed planting are just blistering now, with the frost date fast approaching," he said. His own corn should beat the late October frost his region normally sees, but it will almost certainly be 3% to 7% wetter than he normally aims for, he added.

"Crops are progressing very slowly in my area," added central Minnesota farmer Justin Honebrink. "I don't think that I've ever seen the variability in the maturities that I have this year."

In northwest Iowa, Jay Magnussen is optimistic that the corn crop will yield decently, but his hopes for his soybean fields are fading. Late flowering and a dry spell in early August will likely drop yields 20 bpa from last year's highs, he said.

Diseases and pests have attacked the late-maturing crop in its eleventh hour, the farmers noted. Petker was alarmed to see an unusually late flight of western bean cutworm attack the corn crop and feed on ear tips into September. Sudden death syndrome (SDS) and white mold are widespread this year, as well, he added. "White mold, even in treated fields, is showing up all over the place," he said.

Farmers in Minnesota, Nebraska and Iowa also noted that white mold had been prevalent there, and some mentioned SDS, too.

Some farmers found themselves facing an ugly new foe in soybean fields this year -- soybean gall midge. The fast-spreading new pest of soybeans, which tends to infest the edges of fields and can cause serious yield loss, was a widespread nuisance in northwest Iowa this year, Magnussen said. "We know very little about this pest, and it is out there in most every field killing some plants," he said. "I have it in all my fields, and can see it from the roads in most fields in my travels. The industry and the universities don't know much about it, and I'm concerned this may be the next soybean aphid."

Magnussen, who also works as an agronomist for a local co-op, noted that farmers will not be the only ones feeling the stress and rush of a late, compact harvest season this year.

"The elevator I work at has received two loads of new-crop beans; normally, we are in the thick of soybeans right now," he noted. "I would say we are around two weeks behind on everything. It will be interesting for sure to see if we can get everything done in a timely manner this fall. I really don't want to do 36-hour shifts applying NH3 this fall again!" 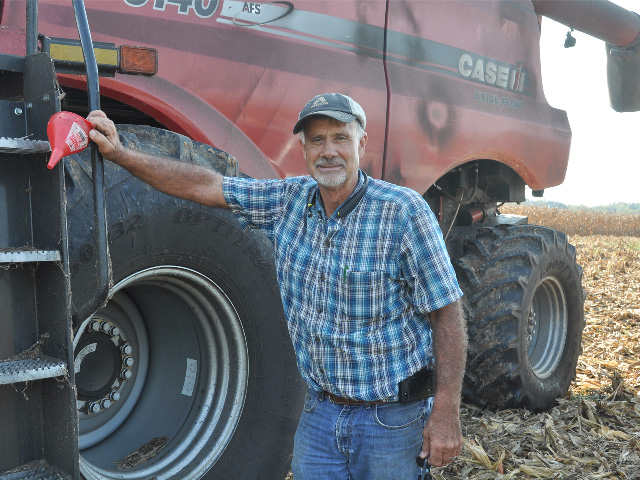