ROCKVILLE, Md. (DTN) -- As combines start to roll this fall, many growers are firing up grain dryers or cleaning out bin fans, in preparation for a wetter-than-normal crop of corn and soybeans.

Other drying challenges loom this year as well, including immature or moldy grain and the difficulty of drying and storing a crop later in the fall, when air temperatures are cooler.

We visited with Ken Hellevang, an Extension agricultural and biosystems engineer from North Dakota State University, to break down the top four concerns for farmers drying grain from this historically late crop.

With crops maturing deep into the month of October this year, growers will face difficult decisions between leaving grain to dry down in the field or harvesting early and drying it mechanically.

The situation is especially risky with soybeans, which are very sensitive to swings in temperature and moisture in the air around them, noted Hellevang. While they might dry down quickly in the field, they also pack moisture back on during high humidity or precipitation, which can make them more fragile and prone to shattering, sprouting and rotting.

"As we push later into October, the greater the concern will become in the northern tier of states," Hellevang said. "We can't be too reliant on weather drying down grain, especially soybeans, this year."

Don't take your eyes off the weather forecast for a moment this fall, he cautioned. "It's absolutely critical that farmers watch that extended 10-day forecast and look at it as a tool in their grain handling decisions," Hellevang said.

"There's a big, hot upper-atmosphere high pressure dome over the Southeast, and an upper-air low pressure trough in the Northwest," he explained. "This trough-ridge pattern is a rain-maker in the northern and eastern Plains and the northern, western and central Midwest. Producers may not be able to get into the field with this situation, let alone do any grain drying."

The eastern Midwest, Delta and Southeast fare better in this timeframe, with warm and dry weather forecast, he added.

There is hope for the Corn Belt, however, closer to Oct. 10, when that southern high-pressure ridge relocates into southwestern Texas, Anderson added. "This would be an important change, because the inflow of moisture out of the Gulf of Mexico would be curtailed, and a drier trend would set up over the northern and central U.S.," he said. "Timing of such a change would also coincide with the maturity date for a lot of acres that are running about two weeks late in their development."

With corn and soybeans hitting full maturity two weeks or more later than usual, chances are good that many northern growers will be harvesting wetter than normal grain, Hellevang said.

At black layer, most corn hybrids will be at about 35% moisture content. Drydown rates vary by geography, but all slow down as temperatures cool into October and November. For example, in North Dakota, growers can usually expect only 10% to 12% moisture removal in the entire month of October, which could leave some fields sitting at 25% or above come early November, Hellevang said. See more drydown rate estimates for states like Iowa: https://crops.extension.iastate.edu/… and Indiana: https://www.agry.purdue.edu/… .

The more northern your region, the greater the risk that a freeze will prematurely end your crop's development this year, he added. These fields can take even longer to dry down, and the immature grain can pose problems for drying and storage.

"The actual physiology of the kernel is different in immature corn killed by a frost," he explained. Drying these kernels with heat can produce browning and discoloration. Experts recommend lowering your air temperature to avoid this. "We typically might dry corn at temperatures around 220 to 230 degrees, but for immature kernels, you may need to bring it down below 200 degrees," Hellevang said.

Immature soybeans pose their own set of problems, including an increased risk of fire, he added. "Typically if we're harvesting immature soybeans, threshing is a challenge in the field and you get more stems and pods and other things that can get held up in the dryer and create a fire," he said. "A soybean fire is an oil fire, so it becomes really nasty."

Immature beans will also require greater drydown time, as they can start at a much higher moisture content than the preferred 13%. Recent NDSU research showed that green soybeans harvested at R6 and R7 maturity stages had a moisture content around 60%. Because of their indeterminate nature, some soybean varieties will also have pods and soybeans at different stages of maturity, leaving growers with a range of different moisture contents in a bin or dryer.

"When you're harvesting green beans, they're likely to come out of a high-temp dryer with moisture variation between seeds and that would be true with corn as well," Hellevang said. "We encourage farmers to run aeration fans after grain goes in the bin for longer than usual to help equalize the moisture between kernels and the seeds."

Spinning augur systems inside bins can help even out the moisture of variable corn kernels, as well, but it's not recommended for soybeans, he added. "The concern with soybeans for all drying techniques is that we're working with a more fragile seed coat, so the more you stir, the more breakage and damage that occurs," he said.

3. KNOW THE DOWNSIDE OF COLDER OUTSIDE TEMPS

As a result, growers who rely on drying their crop in bins using natural-air drying may run into problems this fall. "In most years, you can use natural air to bin-dry grain through mid-October and into mid-November," he noted. "Now, if you're suddenly doing it from early November into early December, we're doing it with much colder temperatures and we're not actually accomplishing very much drying."

These growers may need to brace themselves for the possibility that they will have to finish drying their grain down to the desired moisture content in the spring, when air temperatures rise again.

"When we see temperatures averaging just above freezing, we're not drying anymore and you're just wasting electricity," he said. "Shut the fans off, cool your grain down to temperatures near freezing, hold it over the winter, and then turn the fans on again when temperatures start averaging above 40 degrees."

Another downside to a cold harvest is the moisture that can accumulate when growers move freshly dried, hot grain from dryers into cold storage bins, he added. "When the hot grain hits those cold bin walls, condensation forms, and in some northern tier states where you can be harvesting when it's 30 or 20 degrees, it will literally rain in the bins," he warned. "You can get crusted and spoiled grain along the edges."

Hellevang recommends cooling the grain to around 90 degrees in the dryer before putting it in the bin and continuously aerating while filling the bin.

4. WATCH YOUR BREATH AROUND MOLDY GRAIN

Reports of white mold in soybeans and ear rots in corn are starting to stream in from the Corn and Soybean Belt. These mold spores have obvious consequences for the integrity of grain in storage, and experts recommend harvesting moldy fields as early as possible and drying and cooling the grain down as quickly as possible. See more from NDSU here: https://www.ag.ndsu.edu/… .

But when it comes to handling and drying this moldy grain, Hellevang worries first about farmers' safety.

"Anytime we start dealing with mold spores or other particles from moldy grain floating around in the air, that becomes a respiratory concern for the farmer," he said. "It's one that we don't often think about, but a person who breathes in a significant amount of mold spores can end up with a severe allergic reaction or respiratory issues."

He recommends growers who must handle and dry moldy grain use masks that filter at least 95% to 99% of airborne particles (N-95 or N-99) and use two straps to secure to the head. Lower filtering, single-strap masks can let mold spores through. See more from NDSU here: https://www.ag.ndsu.edu/… . 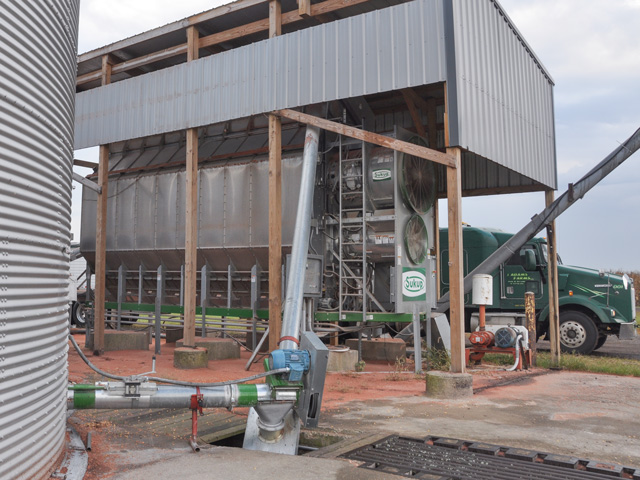