ROCKVILLE, Md. (DTN) -- Like many farmers this year, Ken Franklin knew he didn't have the world's best corn crop when he headed into his fields for a late-season scouting trip last week.

But he was still surprised by some of the problems he encountered on the central Illinois farm he runs with his uncle and nephew. In some fields, the poor planting season and at least two stalk rots were taking a visible toll on stalk quality.

"On one or two hybrids, Physoderma stalk rot really got into the nodes, and they are just snapping off right at the node about a foot to 18 inches up from the ground," he said.

Franklin's story is a common and discouraging one, plant pathologists told DTN. "Right now, I am very worried about stalk rots," said University of Nebraska Extension plant pathologist Tamra Jackson-Ziems. "The challenge is going to be getting some of these fields harvested before they fall down."

SOMETHING ROTTEN THIS WAY COMES

In Iowa, Physoderma infections are widespread, added Iowa State University Extension plant pathologist Alison Robertson. "It's caused by a fungus-like organism that can survive in the soil for five to seven years, and I think we have a lot of hybrids out there that are susceptible to the disease," she explained.

The swimming spores of the disease can infect cornfields early on, between V3 and V8, particularly when corn whorls fill with water for multiple days -- a common phenomenon across much of the Corn Belt this year, she noted. Franklin first noticed some potential infections between V6 to V8, when his farm got a brief window of clear weather to sidedress corn, and he spotted black spots on some stalks. The disease's early start in young cornfields means fungicide applications timed later in the season, such as Franklin used, probably aren't effective against this disease, Robertson noted.

As the infection grows more severe, corn stalks can become riddled with black circular spots filled with sporangia -- the survival stage of the pathogen -- often clustered around nodes. Nonetheless, Franklin said his corn plants seemed to grow pretty well and fill decent-sized ears, so it was still a shock when a casual push sent some of his plants snapping off at the node below the ear.

Unlike other true stalk rots, plants infected with Physoderma will not have a decayed inner core, Jackson-Ziems noted. "When you get a lot of infection right around the node, it makes them brittle," she explained. "You'll see a dark ring around the inside of the broken node." See more from Iowa State University here: https://crops.extension.iastate.edu/….

In addition to Physoderma, Franklin also spotted Anthracnose stalk rot in his fields, and Jackson-Ziems expects a laundry list of other diseases to contribute to weakened stalks this fall.

"We do have some documented brittle stalks because of Physoderma infections at the node, but many more of these weakened stalks have to do with other fungi like Fusarium, Gibberella, Anthracnose, and just the stress we had earlier in the season," she said.

Other stalk rots will cause more obvious rotting injury inside the stalk, and even further down into the plant, Jackson-Ziems said. "Evidence of some stalk rot diseases can be found in the rotted crown belowground when you split the rootball," she explained.

This decayed root tissue will cut off water movement to the rest of the plant, causing sudden and alarming death of the entire plant late in the season, she added. "Just as corn is starting to turn, you'll suddenly see a plant here and there that is already dead -- that's a good indication that you probably have stalk or crown rot." See more on stalk and crown rot from the University of Nebraska here: https://cropwatch.unl.edu/….

The fungi that cause Anthracnose can also cause a striking symptom called top dieback, where the upper three or four nodes of the corn plant die completely and the top of the plant is visibly brown and dead first. "That's one that farmers can usually see pretty easily from the road," Jackson-Ziems said. See more from the Crop Protection Network here: https://cropprotectionnetwork.org/….

Foliar diseases can also put your corn at risk for poor stalk strength. Severe leaf symptoms can limit the plant's ability to photosynthesize, forcing the corn plant to cannibalize its own stalk to help fill and finish its grain. Robertson said foliar diseases like northern corn leaf blight, gray leaf spot and tar spot have been active in many Iowa fields.

BLAME IT ON THE RAIN

Many of the corn plants' stalk integrity issues hearken back to their ill-fated planting season of 2019, Franklin noted.

"When you jam corn into the mud like so many of us had to do, it really hinders root growth," he noted. Between roots stunted by compaction or early access to topsoil moisture, he has noticed some spindly corn stalks in his fields. In some cases, however, those stalks are holding up decent-sized ears that could yield well -- if they stay standing. "A lot of plants are leaning now, and if we can't get in and cut them in a month, we could lose a lot of them," he noted.

For more on why and how stalk health can be compromised late in the season, see this Purdue Extension article: https://www.agry.purdue.edu/….

Jackson-Ziems is urging growers to get out now and rough up these plants to see which fields will stand well through the fall and which need to be on the harvest rush list.

"For me, the easiest thing to do is go through your fields and start pushing stalks an arm's length away from you as you walk by, and keep track of the number that bend below the ear versus those that snap right back up," she said. Fields with poor standability need to be prioritized for early harvest.

While you're out there, pull back some husks and check for ear rots, added Purdue University Extension agronomist Bob Nielsen.

"In many cases, delayed planting leaves corn a little more susceptible to earworms, and that opens the tip of the ear up to pathogens," he said. "So as we get farther into September, I would be on the lookout for ear rot."

Jackson-Ziems agreed, noting that western bean cutworm was also active this year, and wet conditions in Nebraska in August were ideal for mold development.

She is starting to get reports of Trichoderma and Diplodia ear rot, and Robertson said Fusarium is cropping up in some corn ears in Iowa, which can produce toxic mycotoxins called fumonisins. "Grain quality and handling and drying will be more important this year," Jackson-Ziems said.

If nothing else, Franklin added, get out into your fields to get a feel for the kind of corn crop you have coming.

"The conditions we planted into were just so horrible," he recalled. "What's out there is not what we're used to. With three record corn crops the past three years, you kind of forget what average looks like -- but I think we're going to find out." 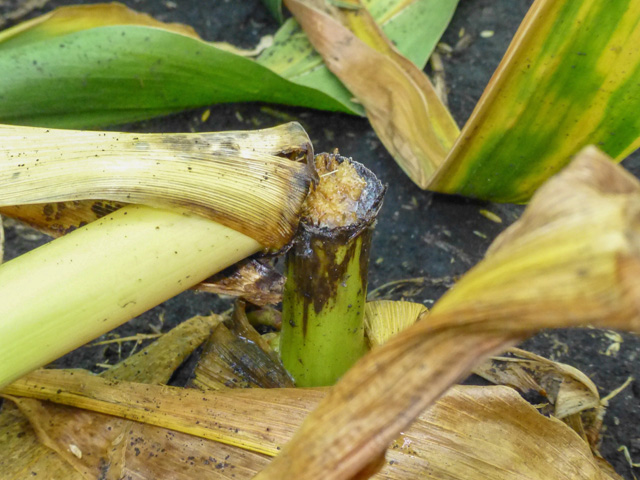