David Castleberg is serious about seed placement in his corn acres and getting more serious all the time.

Raising corn and soybeans on 2,000 acres of rolling prairie in southeastern Minnesota, Castleberg knows that every field is different and needs to be treated accordingly. That means matching population to a soil's yield potential.

"You can't take a C-type soil and expect it to produce at A-type levels," Castleberg said. "You have to set yield goals in line with a field's capabilities."

During the past 20 years, Castleberg has flexed his hybrid-selection muscles, pushing populations from 34,000 seeds per acre to as high as 39,000 to meet yield goals above 250 bushels per acre on most fields. He has also paid particular attention to seed spacing and depth.

However, placing a priority on holding soil requires leaving plenty of residue. It compounds the challenge of placing seed correctly. It's one reason Castleberg invested in a new 24-row John Deere 1775 5e planter with hydraulic downpressure and an electric motor on each seed delivery tube. Not going high speed was a reflection of the importance he places on seed placement.

"With the vertical tillage I do, I'm not convinced I can make the seed bed smooth enough for high-speed planting," said Castleberg, who is comfortable planting at 6 miles per hour. "Population and spacing are more important than ever with the improvements I've seen in the DeKalb hybrid genetics over the past five-plus years."

This is the fourth of five stories in DTN/Progressive Farmer's Stand Strong series. Optimizing yields on every acre requires getting corn off to a fast start and establishing a sturdy stand. Stories in this series will offer tips to strengthen standability.

Analysis of 30 years of Corteva Agriscience yield data by Kansas State University (KSU) endorses Castleberg's emphasis on population. Research carried out by the Syngenta seed division supports that as well as his emphasis on proper placement. Ignacio Ciampitti, a KSU associate professor in predictive agriculture and farming systems, noted that yield increases are generally credited only to improved genetics. However, his independent analysis of Corteva Agriscience's data correlates increased productivity to increased seeding rates, albeit, increased rates made possible by a variety of improvements in genetics.

"Over the past 30-plus years, breeding focused on more plants per field and increasing plant tolerance to higher density," Ciampitti said.

He cited multiple factors that were bred for, including the size of the tassel and the plant, synchrony between male and female flowering for improved pollination, and looking at plant growth, not one plant at a time but as a community of plants. Capturing that yield potential required growers to change management, in particular, plant density. Ciampitti found that over time, the data showed agronomic optimum plant density increased on par with increased gain in yields. Corn productivity decreased in the 1980s if the planting population was too high or too low.

"If farmers are not achieving an optimum density, the result is yield drag," Ciampitti said.

He admits the optimum density can change throughout the years depending on moisture availability, nutrients and other factors. However, most of the modern corn hybrids offer a range of response with a spread of about 3,000 to 4,000 seeds per acre (around the optimal density) without the grower being penalized for too few seeds or excess seeds and, thus, wasted dollars. It is this range that added art to the science of finding the optimum density.

"Farmers need to look at weather conditions at planting, initial soil moisture and previous yields to think how they can match resources in the field with the right number of plants to capture potential yields," Ciampitti said. "Our analysis showed plant density is a factor in increasing yield, as is optimum row spacing, singulation, plant structure and fertility utilization. All these factors play a role, and they can be hard to untangle."

Bruce Battles, Syngenta seeds agronomy technical manager, recommended growers start by evaluating their resources, where and how they farm and what a field's yield history is, and find hybrids that yield well with those environments. Once identified, growers should consider how the top selections respond to seeding-rate increases. He added the response can be significant depending on the hybrid.

"We have historical data back to the early 1990s characterizing hybrid seeding-rate response," Battles said. "While a lot of yield gain has been genetic improvement, there is a lot of interaction with plant population and spacing."

Of the two, he puts his emphasis on population. Battles describes the genetic response to narrow row spacing (15 to 20 inches) versus 30-inch rows as generally hit or miss, and uniform spacing more important than row width. When it comes to seed placement, current planting technology is largely equal to the task, Battles noted.

"Avoiding skips and doubles is important, but precision planting available with factory installs plus upgrades dials in a uniformity level better than ever," he said.

Battles points out that variable-rate seeding can be a vital management tool. "The more variability you have in the field, the more important it is to have that prescription for variable seeding rates," he said. "Even if you aren't penalized in yield, you pay a big penalty in excess seed cost if you don't reduce rates in lower-yielding areas."

Matching yield environments to hybrids and their management by spacing and population is an ongoing effort. Battles said Syngenta is increasing its trials and locations where they are held, noting that as new genetics are introduced into current gene pools, they may respond differently to spacing and seeding rates in particular yield environments.

Ciampitti is hopeful that his research team and others will find more ways to collaborate with industry as they have been able to do with the Corteva Agriscience data. "We are trying to get into deeper analytics and adding more data, as are the technology companies, developing tools to help farmers make decisions," he said.

While Castleberg is confident in his current investments in technology and management decisions, such as matching seeding rates to the potential of a field or areas within the field, he too is seeking more data. The row-crop producer has taken advantage of a new program through his local co-op that includes CHS Agellum, a digital analytics platform.

Co-op staff members do stand counts and seed depth placement on each field, as well as soil sampling and other crop-scouting practices, which is all entered into Agellum.

"It has already been beneficial with gauging how the planter has performed through population and stand evaluation," Castleberg said. "Over the year, it will help us quantify and track inputs, field operation costs, grain-handling expenses and yield performance, and adjust the game plan for next year to better achieve profitability goals." 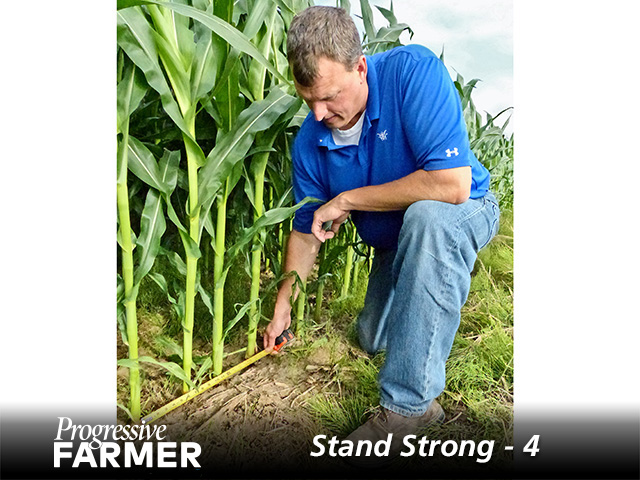