"With Xtend [dicamba-tolerant] technology, we've seen pretty pristine fields in 2016 and 2017," the University of Tennessee Extension weed scientist noted. "Then we started to see a little slippage last year and now, in 2019, we're seeing some weed escapes everywhere. It looks just like it did back when Roundup was starting to fail."

Many of the missed weeds are Palmer amaranth, the aggressive, multi-herbicide-resistant plant that drives weed control in many states now. Although they haven't been tested in a laboratory yet, some of the weed escapes show classic resistance symptoms, Steckel said.

In many of the fields he's visited this summer, it's clear that dicamba was applied in a timely fashion, when the Palmer pigweeds were 2 to 6 inches tall, he explained. "You can see the damage it did on the apical meristem at the time of application, but the plant has recovered and branched out from lower branches on the stem -- that's how it's getting around the herbicide," he said. "It certainly could be resistance because that's one of the mechanisms of resistance -- sequestering a lot of the herbicide in one part of the plant and letting that part die off."

A different problem is arising with grassier weeds, Steckel added. There, potential antagonism -- the reduction of weed control when two or more herbicides are mixed together -- between dicamba and glyphosate in tank mixes is compromising control of weeds like junglerice, goosegrass and barnyardgrass.

"If they run straight dicamba or straight glyphosate, it will often work well," he said. "So we're recommending they split herbicides up for better grass control -- as well as reduced dicamba volatility potential."

Weed scientists in Illinois and Indiana echoed Steckel's potential dicamba-resistance observations, though on a lower level and with a different weed -- waterhemp.

Dicamba manufacturers are also hearing of problems. A Bayer spokesperson said the company has received 880 inquiries on the performance of their XtendiMax herbicide as of Aug. 16 -- up 31% from last year when the company had fielded 670 such inquiries within the same timeframe. (BASF had not responded to inquiries at the time of publication).

Some of these inquiries are a result of application errors, such as using the wrong rate or spraying when weeds were too big, Bayer spokesperson Charla Lord noted.

The challenging season -- a wet, cold spring with delayed applications under suboptimal conditions -- may also be playing a role in some dicamba control failures this summer, added Johnson. But the fields they are investigating show distinct and alarming features of resistance, Johnson said.

"What is concerning is that you have live plants directly next to completely dead plants -- that is a classic case of what Roundup resistance first looked like," he explained.

"Before dicamba-tolerant technology was deployed, I said that I'd only give it three years before we start to see problems," said Hager. "It makes sense, because first, we've used dicamba already for 40 to 50 years in agriculture, and second, we've never used it to the extent that we're using it now."

Farmers, as always, have been on the front lines of this development.

"We are starting to see some misses with dicamba," said John Lindamood, who grows cotton, corn, soybeans and wheat in northwestern Tennessee. "It's not too many escapes, but it's taking more than one application."

Other farmers have started increasing their rates of dicamba in each application to try to knock back pigweed, said Steckel.

"Farmers are the first ones to pick up on this," he noted. "And they start upping the rates. They did it with Roundup and they're doing it now. But eventually they get to a point where they can't go any higher."

The antagonism between dicamba and glyphosate that is compromising grass control is particularly a problem for cotton farmers, Steckel added.

"Cotton guys' herbicide expenses have doubled or tripled this year," he noted.

Click on these links to see more on this topic from Steckel: http://news.utcrops.com/… 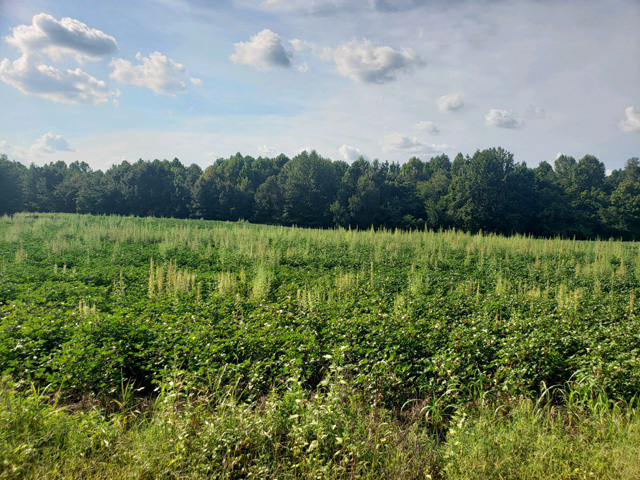