Some 95% of the commercially available SCN-resistant varieties depend on a single source of resistance called PI 88788. While the use of PI 88788 is an agricultural success story, constant use of the single genetic source threatens continued use.

Soybean breeders funded by checkoff dollars from the United Soybean Board and North Central Soybean Research Program have been working to find new genetic sources to thwart the pest, which is estimated to have an economic impact in excess of $1 billion per year in North America. A recent release from the SCN Coalition details the work at https://www.thescncoalition.com/….

Public breeders have been working for years to insert other types of genetic resistance into elite soybean varieties. PI 548402 (Peking), PI 90763 and PI 437654 (Hartwig) are the most promising, but they are much more difficult to work with than PI 88788.

"With these unique resistance sources, you start with low-yielding backgrounds," said Brian Diers, University of Illinois plant breeder. "It takes time to breed resistance from these new sources into elite genetic backgrounds."

Diers said that's partly why the PI 88788 source of resistance has been overused. "It's worked really well, and breeders have been successful at incorporating it into high-yielding varieties," he said.

It is taking much longer to get to yield parity with the other sources, Diers noted. Part of the reason for that difficulty can be explained by the fact that PI 88788 involves one major gene, Rhg1. Peking, on the other hand, involves two genes, Rhg1 and Rhg4. It's simply harder for breeders to work with two genes.

"But as you continue cycles of breeding, you are able to incorporate these genes more readily into elite, high-yielding lines. Breeders have been working on this for a long time," Diers said. "Improved breeding technology is another factor. We have better genetic markers to select the genes we need, so we can develop varieties more quickly."

Soybean growers, particularly in the Midwest, are seeing more soybean varieties enter the market with the Peking source of resistance -- offering farmers more opportunities to rotate sources of varietal resistance.

"We have a large amount of evidence showing that this reduces selection pressure on SCN populations to continually adapt," Diers said.

Breeders at several universities have also been developing cultivars with the PI 437654 resistance source. The first variety released with this source of resistance was Hartwig, which was released in 1992. Breeders have continued to breed with resistance from this source and are now obtaining good yields.

"We combined the two resistance genes from wild soybean with Rhg1 from PI 88788 and have shown that this combination gives greater resistance than Rhg1 alone," he explained.

Diers has also developed a four-gene stack -- the two new resistance genes from wild soybean, stacked with Rhg1 from PI 88788 plus another resistance gene from PI 567516C.

"If you look in the literature, there are many SCN resistance genes that have been mapped," he said. "We worked on the gene from PI 567516C because it can give a greater increase in resistance than most other genes mapped."

Farmers battling aggressive nematode populations should also keep in mind that not all varieties containing PI 88788 are created equal, and rotating the variety you use might help, Diers noted. In other words, simply changing up varieties might provide some help against the pest.

Farmers have to rely on seed companies to tell them what type of resistance is in that seed bag. State variety trials can sometimes help sort through that information too.

One of the goals in the National Soybean Nematode Strategic Plan, a joint effort of the United Soybean Board and North Central Soybean Research Program, is to have varieties containing new SCN genetic resistance sources in all regions of the country. 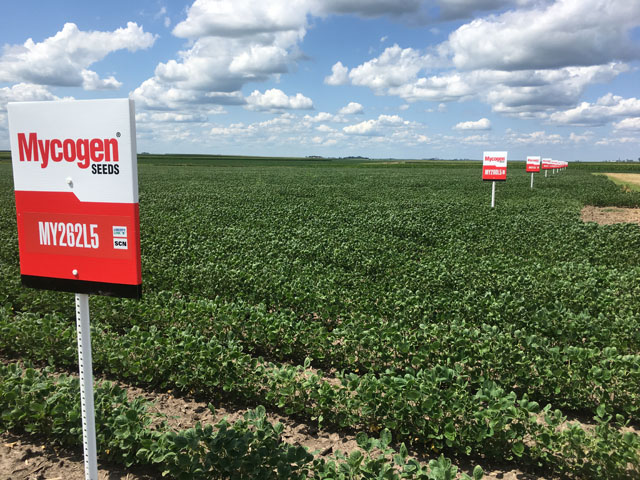