ROCKVILLE, Md. (DTN) -- North Dakota has become the latest state to extend in-crop dicamba use, even as the first injury reports of 2019 start to trickle in from other parts of the country.

The North Dakota Department of Agriculture announced on Wednesday that it has extended its June 30 cutoff date to July 10. "Due to persistent rain events, lack of suitable days for spraying and the delayed growth of soybeans, the last date for applications has been extended to July 10," Agriculture Commissioner Doug Goehring said in a news release. There are currently four herbicides available for in-crop dicamba applications: XtendiMax, Engenia, FeXapan and Tavium.

In the meantime, the first off-target dicamba injury reports of 2019 are surfacing in states like Arkansas, Missouri, Tennessee and Illinois -- as well as some concerns about dicamba efficacy on Palmer amaranth.

The Arkansas State Plant Board has received 50 complaints of potential dicamba injury and six complaints of potential dicamba or 2,4-D injury, Brett Dawson, public information manager for the Arkansas Agriculture Department, told DTN. The reports are for a wide range of plants, including soybeans, pecan and fruit trees, ornamentals, sunflowers, vegetables and berries.

Arkansas had a cutoff date of May 25, but very few dicamba applications likely took place in the state before then, noted University of Arkansas Extension weed scientist Jason Norsworthy, who has seen dicamba injury in two of his research plots in the state already. "We're so far behind in planting this year, that May 25 came and went, and we didn't have a lot of beans in the ground," he said.

In other states, delayed soybean planting has pushed back the spray season so far that dicamba applications are just getting underway, noted University of Missouri weed scientist Kevin Bradley. "I have received a few calls but not much yet," he said. "I think the bulk of the spraying will probably not even occur until next week and the week after."

Dicamba symptoms tend to take anywhere from 10 to 14 days to appear, so there is always a time lag between applications and injury complaints, Norsworthy noted.

Nonetheless, in central Illinois, some damage has already surfaced, said Stephanie Porter, an agronomist with Golden Harvest Seeds. Her research plot showcasing a range of soybean varieties -- Xtend, Enlist E3 and Liberty Link GT27 -- is showing symptoms of dicamba injury, she told DTN. All the soybeans except the Xtend varieties are showing the distinctive cupping and crinkling of dicamba exposure, field-wide.

"I'm going to use it as a learning experience," Porter said. "There is a very good chance that this plot is going to be a reality for the landscape next year. We know there is a lot of interest in GT27 and E3 soybeans, and we are very excited to have some choice for our customers, so this is something we need to look at and learn about."

Because Xtend soybean and cotton acreage has grown to an estimated 60 million acres this year, many soybean and cotton fields will be protected from dicamba injury, noted University of Tennessee Extension weed scientist Larry Steckel. He estimates that 95% of soybean acres and at least 80% of cotton acres have the Xtend trait in Tennessee, which has already fielded a handful of dicamba injury complaints.

"We're not going to see much in the way of soybean or cotton injury," Steckel said. "The calls will be from homeowners and vineyards and that sort of thing." The state's burgeoning industrial hemp industry is also at risk, he noted. "A lot of folks put a lot of time and money into hemp production this year, so we've got some folks that are really worried and concerned," he said.

Now that the technology has had two to three years of injury complaints behind it, the public might be more alert to the issue, Norsworthy and Steckel added.

At least one environmental group in Arkansas is rallying its members and supporters to publicize dicamba damage this year. Audubon Arkansas, the state office of the Audubon Society, is accepting volunteers and donations to find and report dicamba injury symptoms in the state, with a focus on eastern Arkansas. See the group's efforts here: https://ar.audubon.org/….

In the meantime, Steckel has been investigating some reports of poor dicamba control of Palmer amaranth weeds in the state. In the roughly two dozen fields he has visited, he has observed significant regrowth of the weeds after dicamba was applied.

"The visuals of these fields match what we've seen in the past when you first see resistance in a population," Steckel said. "There are some dead plants, some plants struggling and some clearly growing back. It's a concern." While other factors could be at play, including a state-wide cold snap that may have affected efficacy, dicamba resistance in Palmer amaranth is likely not a distant specter for many Southern growers, weed scientists agreed.

"It would not be surprising," said University of Arkansas Extension weed scientist Tom Barber. "Dicamba has been around since the '50s. So there's been a lot of exposure out there." 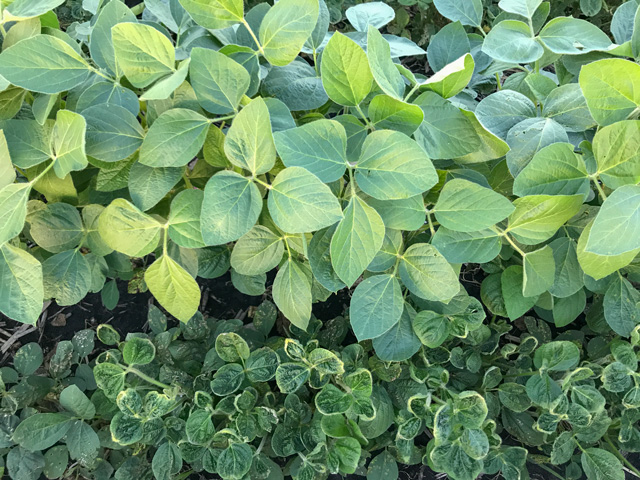