WEST UNION, Iowa (DTN) -- Cover crop seed will be in short supply this year. Farmers and landowners need to get orders in early, according to dealers and veteran cover croppers.

Demand for cereal rye, chickpeas, tillage radishes and other cover crop seed was already strong as more farmers adopt the conservation practice. The latest Census of Agriculture indicates nearly 15.4 million acres of cover crops were sown in 2017, an increase of 50% from the last census in 2012.

Persistent wet conditions throughout the Midwest could prevent a record amount of corn and soybean acres from being planted this year, up to 15 million acres by some estimates. Cover crop experts urge landowners and farmers to seed unplanted acres with some type of plants to keep weeds at bay and maintain soil health.

"Farmers better be calling their seed dealers early with orders to get what they need. Supplies will be tight," said Kevin Glanz, a dealer for Albert Lea Seed. "Cover crop rates may have to be trimmed to cover acres if seed shortages occur. Whether or not you planted corn or soybeans this year, you want something growing all the time."

Persistent, heavy rains this spring caused massive amounts of soil erosion in many northeast Iowa fields without cover crops, he stated. Gullies, washouts and precious topsoil in waterways and ditches were common.

Glanz said that didn't happen on his Manchester, Iowa, farm. All of his 700 acres are planted with cereal rye and other cover crop seed mixtures. The roots and heavy biomass keep soil in place and improve water infiltration.

"I cringe when I see all the erosion, it just makes me sick," Glanz said. "My soil stayed put. That's a big indicator that what I've been doing the last 10 years planting covers is working."

Long-time cover croppers told more than 70 people at the field day about the practice. They said the benefits like improved soil health, water quality, weed suppression and a better bottom line far outweigh the challenges.

Cover crops keep soil in place and sequester nutrients like nitrogen on farmland and out of waterways, studies show. Soil health improves by sowing cereal rye, oats, radishes and other plants just before or after harvest, building organic matter. Cover crops extend biological activity of the ground until spring planting.

Glanz said it takes time to learn which covers work best for a farmer's soil types and geography, and initial yield hits may occur. But, in time, the practice can pay for itself in reduced nutrient and herbicide inputs and increase production. Glanz uses 33% less nitrogen in corn production than in the past and yields increased 10%-15%.

"I'm not farming for fun," he said. "To stay in business, anything I do needs to pay."

Cover crop seed and application costs can vary from $10 to $30 or more per acre, depending on mixture and methods used.

Steinlage often hosts field days to share the agronomic and economic benefits of cover crops. He said it's more important this year so farmers new to the practice keep doing it, even if seed is hard to find.

"Knowledge sharing is the key," said Steinlage, who's been planting cover crops for more than a decade.

Steinlage interseeds a cover crop mixture of 32 species, mainly small grains, into corn at the V4 to V6 stage. He also plants covers after corn and soybean harvest.

All of Steinlage's cover crop seed is in the shed for 750 acres. He encourages farmers to order seed now to lock in delivery. Farmers may have to order species of cover crops in less demand to get enough seed. It's worth it, he said.

"I don't run a non-profit," Steinlage said. "I'm getting an extra 15 bushels of corn per acre on $15 worth of cover crop seed."

Jack Boyer of Reinbeck, Iowa, started interseeding cover crops into corn in 2014. By planting early, he said the plants build more biomass to capture more nutrients for the cash crop. In 2015, the amount of nitrogen retained was more than double the amount in non-interseeded corn, or 66 pounds per acre, worth an extra $30, he said.

"People think I'm crazy when I say I'm getting 1 bushel of corn per half-pound of nitrogen," he said. 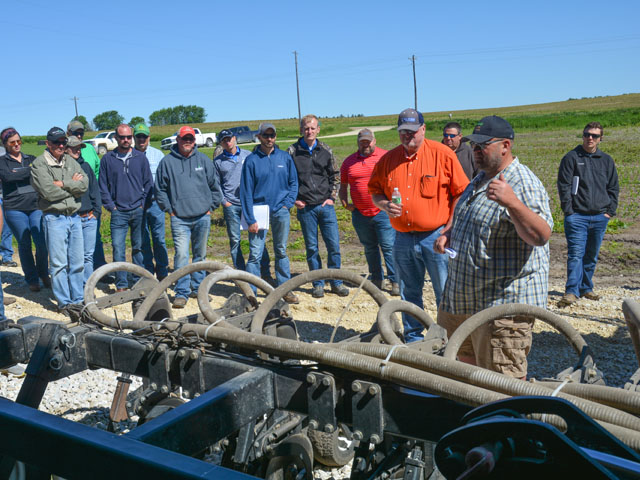