ROCKVILLE, Md. (DTN) -- Turns out there are a few creatures out there that are enjoying the wet mess of the 2019 planting season.

Some early season caterpillars and slugs are out and feasting on small, late-planted corn and soybean fields.

These fields are especially vulnerable to damage from insects this year, cautioned University of Illinois Extension entomologist Nick Seiter.

"In general, the later the planting, the younger the plant is when they feed on it," Seiter explained. "And younger plants are less able to overcome that stress."

To add to the problem, many growers missed spring herbicide applications, which allowed some fields to get "pretty hairy" and host a lot of insects, Seiter noted. "A lot of weeds in a field allows caterpillar pests to complete their early development and then, once the weeds are burned down, they need to find something to eat."

Here are this week's top culprits to watch for:

Cutworms are active in much of the Midwest now, and they do their worst damage in young cornfields that haven't yet reached the V5 or V6 growth stage.

They typically lay their eggs in weedy vegetation and then move to corn. Weedy fields and cover crop fields are most at risk. In the early stages of development, namely instars one through three, black cutworms will feed through the stem of a young corn plant, producing a distinctive "shothole" appearance, Seiter noted. By the fourth instar, the cutworm is capable of completely "cutting" a corn plant off -- either stunting it or killing it if the cut is below the growing point.

"That's the damage we're most worried about -- the stand loss situation," Seiter said.

Some Bt traits, such as Cry1F and Vip3A, do target black cutworms, but the bigger the cutworm larvae, the less protection the traits will provide, Seiter said.

"The traits are much more potent against early instars, so how well it works depends on the timing of the interaction," he explained. "Usually, once cutworms get up to cutting size, the trait will deter but not necessarily stop them."

The black cutworm is a particularly ugly insect -- Seiter describes its black color as having a "greasy, dull sheen," although they aren't actually slimy to the touch. During the day, the cutworm burrows down into the soil, so scouting means getting your hands a little dirty by brushing aside soil near damaged plants.

If you find that 3% to 5% of your corn stand is suffering from cutworm damage, and the insects are still active in the field, it may be prudent to spray for them, Seiter said. See more details on recommendations for managing black cutworm from the University of Illinois here: https://ipm.illinois.edu/….

True armyworms share a lot of the same early-season habits of the cutworm, such as a great love of weedy vegetation and a taste for young corn plants. However, armyworms often target soybeans and wheat in addition to corn, and they have a preference for grassy weeds or crops, such as rye.

"The reason they get their name is that, once a food source has run out, they will all march in unison to a new food source together," Seiter explained.

Armyworms are defoliators -- they will feed on corn leaves, but don't have the same cutting potential as the black cutworm, and corn is usually more resilient to their feeding, Seiter added. "Corn can take a lot of damage early on, as long as they haven't fed on the growing point," he said. Remember that only the Vip3A Bt protein protects corn against true armyworm -- check the Bt Trait table here: https://agrilife.org/….

Avoid useless "revenge applications" by making sure that armyworms are still active in your field when you spy significant damage. "If you can't find any larvae, it's because they've developed and moved on, so you want to make sure they are there and actively feeding before you treat," Seiter said.

Finally, cutworms and armyworms may have cycled out of fields and pupated in some parts of the Midwest, so growers should check local trapping networks for guidance on the timing of potential infestations, Seiter added. For example, Illinois growers can find their state's trapping information here: http://bulletin.ipm.illinois.edu/….

By far the most frustrating of the three pests selected here are slugs, which are extremely hard to treat in-season.

These slimy pests favor wet weather and plenty of residue, so no-till fields, cover crop fields and fields coming out of pasture or the CRP program are at the highest risk for damage.

"When they do really well is when we have wet conditions right around planting and cool, wet weather persists and slows down development of the plants and give slugs more time to do damage," Seiter said.

Soybeans are often most at risk, because the slugs are more likely to destroy their growing point and kill the plant entirely, Seiter added. Corn can overcome their feeding better. Fields with open seed slots -- often the result of mudding seed in -- are also at risk, he said. "That open seed slot makes a nice location for the slug to hide, and it will feed on germinating seeds right as they push cotyledon out."

As mollusks, slugs are not affected by insecticides, which makes controlling them extremely difficult. Molluscicides exist, but they are often expensive, of limited availability and can be impractical for large-scale crop fields, Seiter noted. Tillage can help, but it is obviously not a good solution for no-till farmers, he added.

"The best solution, unfortunately, is often to just wait it out," he said. "Slugs do not like hot summer temperatures." 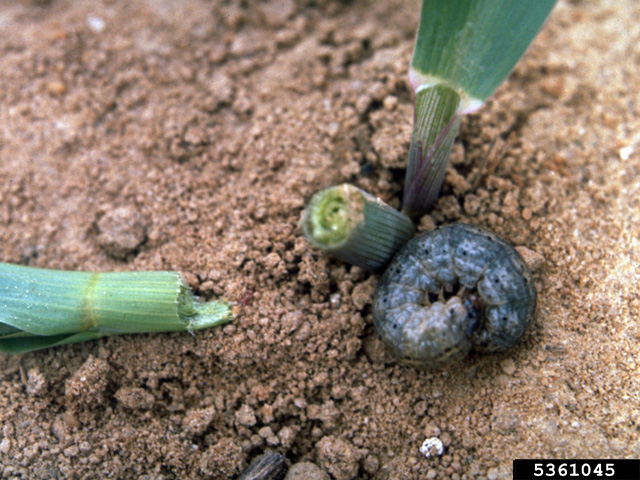