ROCKVILLE, Md. (DTN) -- Many soybeans will be planted in June this year, after persistent rainfall has delayed planting across the Soybean Belt.

The good news is June-planted soybeans can thrive, given the right production practices. Here we've pulled together the latest research and recommendations from Extension scientists on how to adjust maturity group, seeding population, row spacing, seed treatments and which pests and diseases to brace for in late-planted bean fields.

Don't rush to switch maturity groups just yet. Most university research shows that full-season varieties for most regions are still the best option in early June, in terms of yield potential. "This is because they produce a larger crop canopy before beginning to flower and have a longer timeframe to flower, set pods and fill seed," explained Michigan State University Extension soybean educator Mike Staton, in a university article on late soybean planting.

But by June 15, the risk of full-season soybeans running into frost or freeze damage in the fall increases. After that date, Staton recommends growers plant varieties that are 0.5-to-1.0 maturity group earlier than their usual varieties if possible, a suggestion echoed by University of Nebraska Extension educators in a guide to late soybean planting.

University of Wisconsin Extension soybean and wheat specialist Shawn Conley tells growers on his CoolBean Blog that "if planting is delayed until mid to late June or more likely replanting is needed, a variety that is at least a full [maturity group] earlier should be considered to avoid fall frost damage."

Purdue University Extension soybean and small grains agronomist Shaun Casteel tells Indiana growers to plant full-season varieties until mid-to-late June by region: "Full-season varieties for your respective regions should be planted until June 15 for the northern quarter, June 20 for the central half, and June 25 for the southern quarter of Indiana," he said in a university newsletter. "Varieties should be dropped a half maturity group after these dates and planted for another two weeks before we consider other alternatives. If you are in a very late planting situation, I suggest back-dating 90 days from the typical fall freeze in your region to determine if you have enough growing season to mature a soybean crop."

He recommends growers aim for a 10% increase in seeding rates, or roughly 10,000 to 15,000 seeds/acre, for each week of delayed planting into June.

Staton offers a recommendation of 15% increase in planting populations during the first half of June and 20% in the second half of the month, for Michigan growers.

Wisconsin's Conley actually pinpoints a population of 154,000 seeds per acre for late-planted fields, based on years of seeding rate population trials across the several north-central states. See his reasoning and research here: https://coolbean.info/….

"We typically see a yield advantage of 5 to 10% for soybeans planted in narrow rows (15 inches or less) compared to 30-inch rows, and this difference will be even more prominent in late-planting situations," Casteel added. "Wide rows (30-inch) take nearly 25 days longer and 40 days longer to canopy compared to 15-inch and 7.5-inch rows, respectively. This delay will certainly decrease the yield potential as canopy closure would occur well after reproductive initiation."

OSU's Lindsey actually recommends Ohio growers plant beans as tightly as 7.5-inch to 15-inch rows for June-planted fields. "The later in the growing season soybeans are planted, the greater the yield increase due to narrow rows," she said.

Conley's work on soybean population and treatments suggests that north-central growers can see a small but significant yield bump from the use of insecticide and fungicide seed treatments on April- and May-planted soybean fields. But that advantage fades as the planting date slips into June, particularly in regards to insecticides.

In June, chances are the soybean plant is emerging into much more favorable conditions and may more easily outrun common soil diseases and insects, which can make seed treatments less necessary, Staton explained. "Fungicide and insecticide seed treatments may be less beneficial with late planting as the soil will be warm and germination and emergence should occur rapidly -- five to six days," he said.

That said, growers with a field history of certain seed-borne diseases or insects should not skimp on treatments. "If you are planting into a field with a history of Phytophthora root rot, plant a variety with specific race resistance or plant a variety possessing a high level of field tolerance and treat the seed with the highest recommended application rates of Mefenoxam, Metalaxyl, Ethaboxam or Oxathiapiprolin," Staton said.

While fast-emerging June-planted soybeans might escape the grasp of some early season pests, such as Sudden Death Syndrome or soil-borne insects, other threats still loom. Insects and diseases that move in during the summer months can build to more damaging levels on younger fields, Staton noted.

Soybean aphids are a good example of this potential danger. "When aphids are deposited into soybean fields in the vegetative stages during mid-season flights, they will reproduce more rapidly and reach economic thresholds two weeks sooner than aphids deposited into fields in the early reproductive stages," Staton warned. "Scout less mature fields often and thoroughly. Late-planted soybeans are also more susceptible to injury from aphid feeding as they will have less leaf area and root growth than soybeans planted earlier in the season."

The narrow row spacing that can aid in weed control and yield potential can also encourage certain diseases, the Nebraska scientists noted. "Narrowing rows can favor diseases such as sclerotinia stem rot (white mold of soybean) that like a humid, moist canopy," they said. 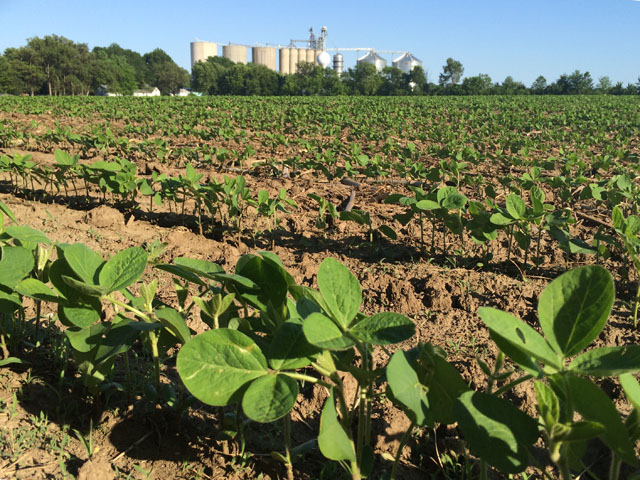