ROCKVILLE, Md. (DTN) -- This spring is delivering a grim message to many farmers this year.

"It seems like both the weather and the markets are telling us not to plant any of the big three cash crops this year," said Dan Petker, a farmer from Ontario, Canada. "Personally, if it stops raining today, we'd still be waiting at least 10 days before we could get started with planting. Ontario doesn't have a prevent plant program like [the U.S.], so a crop will most likely be planted; be it a profitable one or not."

In this week's Field Roundup, a group of farmers and ranchers from across the farm belt weighed in on the spring's many challenges so far, from persistent wet and cold conditions to volatile commodity markets.

WET EVERYWHERE, BUT SOME PROGRESS IN THE SOUTH

Farmers in more Southern regions have made some progress on planting, but their Midwest and northern counterparts remain caught in a stagnant wet weather cycle. Some snuck in some corn and even soybean planting back in late April, but what has emerged is showing the effects of a long wait in cold soils without much sunshine.

"It has been raining at least every other day, if not every day, for the last month," said Raymond Simpkins, who farms in southeastern Michigan. "Very little corn and beans went in four weeks ago and has yet to emerge."

Kyle Samp's April-planted corn took 20 days to emerge in north-central Missouri. "One-third is up and looks OK, on one-third, the stand is iffy, and the last one-third is no doubt a replant," he estimated. "Ideally, we would be done with corn and have a good jump on beans. I don't really see a scenario where we aren't planting beans well into June."

Likewise, Josh Miller of southern Illinois managed to squeeze 60 acres of corn planting in, only to see half of it disappear under the floodwaters of the swollen Mississippi River. "We haven't been in the field for over a month," he said.

Farther south, farmers have had a slightly less miserable spring planting season. Oklahoma farmer Zack Rendel wrapped up his corn planting on time two weeks ago, but he's waiting for drier conditions to start soybeans. His region of northeastern Oklahoma has received 12 inches of rain in the past three weeks -- more than a quarter of its annual average precipitation.

"All of our corn is out of the ground and looks really good," Rendel said, with some surprise. "Some places are yellowing a little from too much wet feet, but for how many inches they've endured, it looks fantastic."

Charles Williams of northeastern Arkansas finished corn planting a few days later than normal and has jumped right into cotton and soybean planting. "Then we'll evaluate the need for replants and determine whether we'd like to plant additional acreage to cotton," he said. "It's best to have cotton planted by May 20 in the North Delta, but we've planted up until the 25th plenty of times."

In the Texas Panhandle, farmer and rancher Mike Lass isn't sweating a slight cotton delay, either. "Cotton planting is in rain/low-temps delay mode for now," he said. "But still plenty of time to plant cotton before the June 5 [full insurance] cutoff."

Many in the Midwest facing more rain in the forecast are making the difficult decision to tweak their inputs or seed selection. Missouri's Samp has already switched out his longest-season corn hybrid for a shorter one to cut on drying costs this fall, and he is considering increasing his nitrogen rate at sidedressing to account for leaching this spring.

Some farmers are making the conventional pivot to soybeans, which can handle a shorter season better than other crops. If William's heavy gumbo soils in Arkansas don't dry out in time, many of his rice acres might be switched to soybeans, and Illinois' Miller expects to move about 15% of his soggy corn acres to soybeans soon.

But others are bucking the beans, which have emerged as a major market casualty in the trade war with China.

In central Kansas, Kyle Krier is mulling moving some acres out of grain entirely, into teff grass or hay, which look potentially more profitable than either corn or soybeans.

For others, prevented planting, as unpleasant as it is, may be the most economical decision for wet corn acres than any other crop -- particularly soybeans.

"If I end up with prevent corn acres, I will leave them fallow," said Michigan's Simpkins. "Last year, I switched acres to beans. But with the current market, I will not grow more beans."

Some have already tangled with prevented planting this year. Both Kansas' Krier and Oklahoma's Rendel had to leave wheat acres unplanted last fall. With the prevented planting payment for wheat, plus a spring soybean crop, those lost acres might redeem themselves, both noted.

"There should be an opportunity for some profitability on those acres if we get this next crop in the ground timely," Krier said.

The soybean markets have been the source of much heartburn this spring, particularly in the last week, when prices rode a rollercoaster of Twitter announcements of additional tariffs and another round of trade mitigation payments to farmers.

Farmer reactions varied widely, from anger and disgust to stoic support and even Zen-like detachment.

"The markets just feel like a punch in the gut right now," said Honebrink. "Every time I get my new budget and plan figured out, markets drop and I have to go back to the drawing board."

Rendel added: "I can't tell you how worried and on edge I am every day watching the markets, wondering what is the next thing I'm going to see on Twitter. I'm walking on pins and needles every day."

In central Ohio, Keith Peters believes not all our trade partners will return when the dust settles. "We have to go forward with the realization that we have lost market share for the foreseeable future," he said.

But other farmers view themselves as soldiers in the trenches of the trade war -- battered, but determined, even optimistic. "You have damages from war -- the American farmer is seeing this with the soybean price," explained Nebraska farmer Luke Lauritsen. "But the corn market has a good profit potential."

"We've gone this far; we can't back down now -- that's just what China expects us to do because we always have," added Bob Birdsell, of northwest Missouri. "Some people are upset, but this is what [President Donald Trump] said he would do, and a lot of people voted for him to do it."

"We've got enough to worry about with the stuff we can control like inputs and costs," said Lass, of Texas. "The government and the markets are like the weather -- volatile and unpredictable. Whatever happens, happens!" 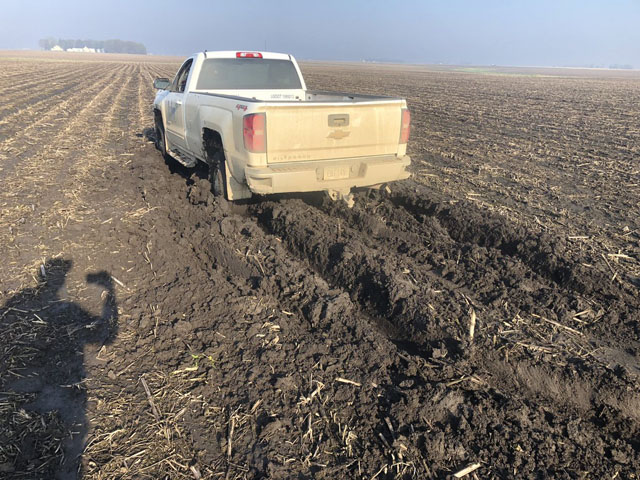