ROCKVILLE, Md. (DTN) -- If you dealt with any tar spot infection in your cornfields last year, Jim Donnelly has some advice for you: Get used to it -- but don't panic. Researchers are slowly getting a grasp on how the disease works and most fungicides are effective against it.

"My experience, after looking for it for the last four years, is that we will see it this year -- it's just a matter of how heavy the disease pressure will be," said Donnelly, a technical agronomist for DeKalb and Asgrow. Donnelly works in northern Illinois, which was one of the epicenters of a major outbreak last year of the new corn disease.

"Once you have identified it in your fields, keep in mind that it's probably established there," advised Nathan Kleczewski, an Extension plant pathologist at the University of Illinois, during a webinar on the disease this week. "You have to think about this as something very similar to gray leaf spot and northern corn leaf blight -- once it's in your residue, it's something you have to think about when managing your fields in the future."

Here are some things to consider as you head into the spring of 2019, with spots on your mind.

The disease's origin in Mexico and Central America may evoke images of tropical heat, but don't be fooled. Tar spot actually occurs most often in mountainous or oceanside regions of Latin America, where the air is cooler as well as humid, Kleczewski said.

As a result, the disease has found the north-central Midwest very homey, indeed.

Tar spot prefers temperatures ranging from 60 to 72 degrees, with wet leaf surfaces and relative humidity over 85% -- essentially your average muggy summer night in the Midwest in 2018, noted Kleczewski.

In particular, the heavy rainfall amounts in June and August through October last year, combined with susceptible corn hybrids, conspired to produce to epidemic levels of the disease for the first time since its arrival in the U.S. in 2015.

And if you were hoping those frigid Midwestern winters would bother this new corn disease, no such luck, Kleczewski added. "We do have evidence that it overwinters here," he said. The research literature suggests about 10% of the spores present at the end of the season can survive through the winter, he added.

2. YES, YOU ARE SUSCEPTIBLE

Almost all corn hybrids in the U.S. are susceptible to the disease, both Kleczewski and Donnelly noted. "There is no particular genetic background or brand that stands out," Kleczewski said. "Every company has a few that are more tolerant, but most are going to be in that middle to high level of susceptibility -- and that makes sense, because nobody has been selecting for resistance or tolerance to this disease."

If you have questions about your 2019 hybrids' particular level of tolerance, consult your seed dealer, he added. Knowing you have a very susceptible or more tolerant hybrid can help with scouting and disease management plans for the summer.

Those black spots are more than unsightly -- they're stealing corn from you. By blotting out a leaf's ability to photosynthesize, tar spot lesions caused lower yields, premature dry down and lodging in 2018, Kleczewski said. He estimated that in Illinois, researchers saw losses anywhere from 10 to 40 bushel per acre (bpa) from the disease.

Donnelly agreed, saying he saw mostly losses of 10 to 20 bpa, especially in fields where farmers didn't use fungicides. But in certain severe cases where the disease got an early start in late June or early July, losses of 40 to 60 bpa did occur.

Fortunately, fungicide trials last year showed that most corn fungicides have efficacy against tar spot, but timing is crucial. "The ones that were most effective last year were made when there was still very little disease showing at all," Donnelly said. "Because of aggressive nature of the disease and hybrid susceptibility, you want to be on the front side of this."

Fungicide timing will be complicated by the disease's latency period, Kleczewski noted. Tar spot lesions can take 14 to even 30 days to form after infection occurs. But once the lesions develop, each one can house 1,000 spores, which can travel at least 250 feet to infect new plants when weather conditions are favorable.

Fungicides applied during the vegetative stages or at tassel when the disease was just getting started appeared to be the most worthwhile investments, Kleczewski said. Later-season applications did help limit the severity of the disease but were less likely to save enough yield to be profitable.

"Pay attention to your corn," he advised. "If you notice tar spot picking up on vegetative corn, and there is wet weather coming, you might benefit from a fungicide application."

Other control options are less certain to be helpful. Since corn residue appears to house the disease, burying residue with tillage could help lower the level of inoculum within an individual cornfield, but it won't prevent the disease arriving from neighboring fields, Kleczewski said.

Since many growers saw serious infestations in first-year or even third-year corn fields in 2018, crop rotation does not seem like a sure protection in an epidemic year, Donnelly added. "It speaks to the ability of the disease to move broader distances," he said.

Like many common foliar corn diseases, future tar spot epidemics will be determined almost entirely by the season's weather, Kleczewski said. "It will come down to where and when will it be cool and wet?" he said.

"If you had it last year, or your neighbor did, pay attention to your corn," he recommended. "If you notice tar spot picking up on corn in vegetative growth stages, with more wet weather coming, then you might benefit from a fungicide application." 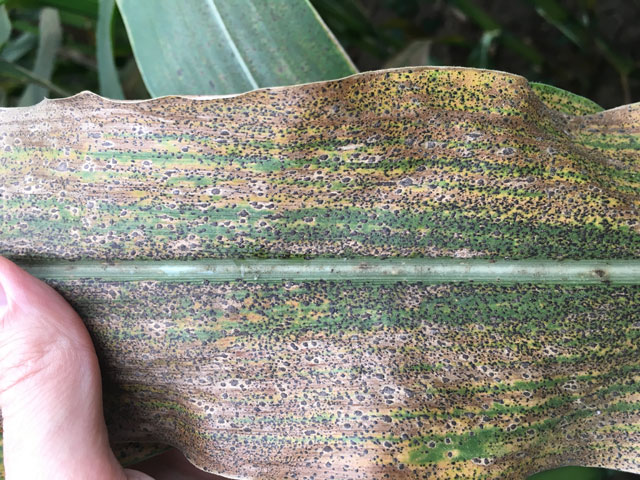