On a sunny fall day with just a bit of a nip in the air, Andrew Reuschel was piloting the combine, swallowing 200-bushel-per-acre-plus corn on the family farm, near Golden, in western Illinois. In parts of the field, there were remnants of green foliage low to the ground between the browned corn rows.

"There were eight species of cover crop in there that have mostly winter-killed now," Andrew said. Those species were a mix of oats, cowpeas, hemp, rapeseed, radish, buckwheat, flax and guar (cluster bean). He pointed out a still-vibrant green radish plant that's a volunteer from the previous year.

"I may plant cover crops three times a year on a field," 29-year-old Andrew said. "I put down only a third of the fertilizer that (most other farmers) would use, and I might not apply chemicals at all. That's my goal for most of the farm." In 2018, the family had a soybean field on which they used an initial burndown but didn't use any other pesticides for the rest of the season.

Andrew chuckled. "That's where I go beyond Dad's comfort zone."

He and his father, Jeff, 57, farm 1,300 acres. Neither are strangers to cover crops, terraces and other conservation practices. Andrew's grandfather, Louis Reuschel, now 89, garnered attention 40 years ago for his conservation work, and they've continued a stewardship tradition.

The good-natured tug-of-war between Andrew and his father focuses on their level of experimentation and its potential effects on profitability for their operation, where every acre is important.

"When Andrew came home," Jeff said, "in terms of cover crops, he started blowing the top off the box like there are no boundaries. I had given up on cover crops generally a few years before but kept building terraces and using less tillage all the time."

The Reuschels stopped for lunch served in the field from the back of an SUV, courtesy of Andrew's mom, Theresa (Teri). When Andrew came back to the farm three years ago, he had lots of ideas.

"We just listened to him," Jeff said smiling. "We let him go; we let him talk."

Said mom Teri, "We reminded him that we still have to pay the bills."

Obviously, they've been won over -- within reason. "Andrew is fine-tuning the nutrients the cover crops can provide," Jeff said. "I'm in them for their value preventing erosion. Now, he has us interseeding cover crops in the corn at the V4 stage."

Andrew and Jeff each initially had their own plots for this experiment. They interseeded a mix of buckwheat, oats and cowpeas. Andrew's plot was 60 acres, and Jeff's was only 10 acres. They've both been pretty satisfied with the results.

"So far, I've liked the interseeding," Andrew said. "The cover crops aren't competing with the cash crops, and they provide erosion control and weed suppression." He recalled going into the field in the middle of summer on a 100 degree Fahrenheit day.

LOOKING TO THE FUTURE

Jeff remains somewhat skeptical for different reasons. "You have to prove to me the nutrient value over time," he said, acknowledging that he doesn't want to stand in the way of the practices and techniques that can help additional generations of his family continue to operate.

Andrew served five years in the U.S. Army after high school -- including tours of duty in Iraq and Afghanistan -- before returning home and going to college. He and his wife, Emily, have a 2-year-old son, Everett, and a second child on the way. They also recently purchased and are renovating a home.

Jeff and Andrew have also begun work on a new farm shop that has literally been in the planning stages for decades. The new facility will include a parts room and a fabrication station for Jeff, who has plans to design and build a planter specifically for interseeding. He is keeping his eyes wide open toward the future.

"All my life I wanted a new shop," Jeff said. "When Andrew went into the military, I didn't know if he was coming back to farm. There was no use for just me to expand. Now, 20 to 40 years from now, we'll look back and say we did a good job building a shop."

Jeff wants to be able to say the same thing about the techniques and ideas that Andrew is now fearlessly bringing to their farm.

"If this (extensive use of interseeded cover crops) is part of the next big thing and really pans out, I want to be there with it," he said. "I don't want to be a laggard."

He motioned to what was a field of no-till soybeans prior to harvest. The soybeans had been planted into a green rye cover crop in the spring. They did the typical practice and sprayed a post-herbicide two weeks later.

"I was thinking we didn't need that herbicide," Jeff said. "As it turned out, we didn't have to do anything else in that field. The weed pressure was minimal compared to other farms, and it was all due to that rye, I know it was."

Back in the combine, Andrew acknowledged that with two families involved, they will always be on the lookout to farm more land, but that isn't their primary goal.

"We told our banker that we're not trying to grow horizontally, we're trying to grow vertically," Andrew said. They want more out of the land they have, while not spending as much on crop-protection chemicals and synthetic fertilizers. 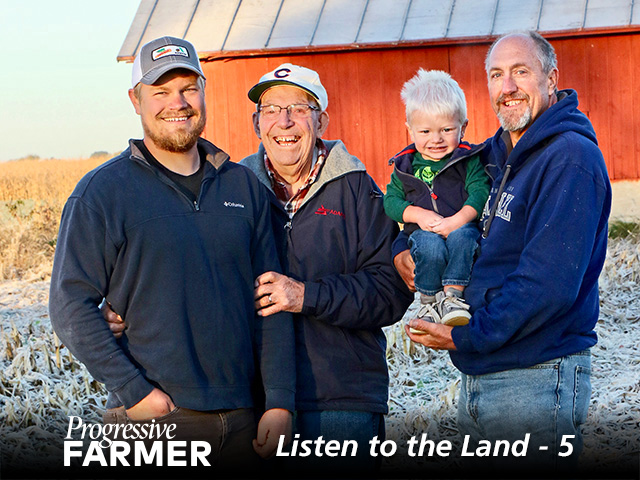