DECATUR, Ill. (DTN) -- Waterhemp has just thumbed its nose at another group of herbicides.

Waterhemp resistant to Group 15 herbicides (very long chain fatty acid inhibitors) has officially been found in Illinois research plots. It is the first dicot (broadleaf) weed in the world to outmaneuver herbicides within the Group 15 chemical family. While scientists aren't sure how widespread the issue is, University of Illinois weed scientist Aaron Hager said the discovery is yet another warning to change weed management behaviors now.

"Waterhemp has now shown the ability to resist seven different herbicide sites of action," Hager said. "Farmers have been leaning heavily on the Group 15 herbicides across all crops as they battle resistant weeds. This is another example of how important it is to diversify weed control approaches to keep the effectiveness of this tool," Hager said.

S-metolachlor is the active ingredient commonly sold by Syngenta under the trade name Dual Magnum. It is also found as a component in many popular herbicide premixes.

"We feel it is important as a manufacturer to alert farmers to these findings and work alongside weed scientists to keep these herbicides effective as long as possible," said Vail. "The reality is not any one product or class of chemistry by itself is good enough. We need them all."

Go down through the sites of action commonly used in corn and soybean crops today and nearly all have had some level of resistance confirmed, Bowers added. "This is the age we live in. Resistance to a particular AI (active ingredient) or site of action doesn't invalidate or devalue that active. It can still be extremely important across a wide geography to control other weed species," he said.

A CRACK IN ARMOR

What makes this discovery unique is the Group 15 herbicides have been fairly resilient. Worldwide, there are only five cases of grass weeds that have been confirmed resistant to very long chain fatty acid inhibitor (Group 15) herbicides. Most of those cases are in wheat and rice. The only confirmed Group 15 resistance in the United States had been in monocot (grass) in Idaho, Washington and Oregon.

The Illinois discovery is the first confirmed case in the world in a dicot (broadleaf) weed species and the first case of Group 15 resistance known associated with corn and soybean production, according to the International Survey of Herbicide Resistance (www.weedscience.org).

Hager said both of the resistant populations demonstrate resistance to all Group 15 herbicides tested, which included S-metolachlor (Dual Magnum), dimethenamid-P (Outlook), pyroxasulfone (Zidua) and acetochlor (Harness, Warrant, Degree and others).

"In field trials, we noticed that the level of control with metolachlor was drastically lower than that of acetochlor (Harness, Warrant, Degree and others)," he noted. "It has always been less, but this was dramatically different."

Further field trials and greenhouse studies showed resistance ratios that ranged from 4- to 64-fold among the Group 15 herbicides. However, Hager said that doesn't mean simply switching to another herbicide within this site of action removes the threat of resistance in this weed species.

"This is yet another example of how relying on chemicals alone to control waterhemp isn't working anymore," Hager added. "It also means we expect the length of residual control is going to continue to decline." Group 15 herbicides are also important ingredients in pre-emergence residual programs.

Weed scientists have long warned that new herbicide miracles are not sitting in company pipelines. Bowers and Vail point to Syngenta's Resistance Fighter program as an example of efforts to educate about the risk of continuously relying on the same weed-control tactics.

However, they also agree that the message is deceptively simple in a world where nature keeps evolving. "While this particular example of resistance seems to be limited right now, it is evidence that we need to do things different going forward," Vail said.

"We cannot continue to rely totally on herbicides and expect to be sustainable long term," he said. "I think in a lot of cases we're doing the right things, but it is getting more and more difficult for these herbicides to be effective in some of these weed species."

Some key ways to delay herbicide resistance include crop rotation, combining effective herbicides with multiple sites of action and using full rates for all applications in the field. Letting pre-emergence residual products clean up fields early and using postemergence products as a backup, rather than the first line of defense, is also important, Bowers said. Cover crops, tillage and increasing crop competition through narrower row spacings are other tactics to improve odds.

Bowers added that products such as atrazine and HPPD-inhibiting herbicides, for example, have had known resistance for years, but remain important tools. "While the discovery with Group 15 resistance in waterhemp is important, we think that addressing it early and being upfront about it is equally important.

"There's a lot more work to be done to find out how or why this has developed in Illinois," Bowers said. "What we do know is it is critical to use full rates of products and employ multiple tactics to avoid resistance."

Hager said one clue that resistance may be evolving in the field is if you notice the residual control of the product isn't holding up.

Don't assume the sprayer skipped if you see a small weed break. Pull a sample. Have it tested for resistance, he said.

For a full summary of the weeds and countries that have confirmed resistant to long chain fatty acids: http://www.weedscience.org/… 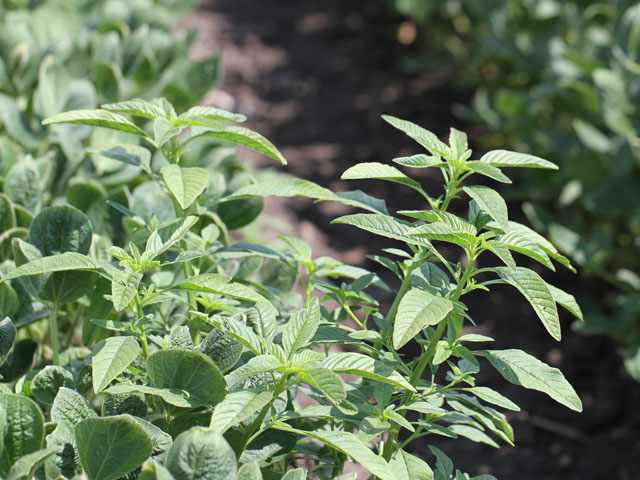