ROCKVILLE, Md. (DTN) -- The U.S. Ninth Circuit Court of Appeals dismissed a lawsuit against dicamba last week, but left open a door for the plaintiffs to expedite a new lawsuit in 2019.

The original lawsuit, which was filed by four farm and environmental groups in 2017, argued that the EPA's 2016 registration of XtendiMax for over-the-top use on soybean and cotton fields was unlawful. When that registration ended and EPA renewed the dicamba registration in 2018, Monsanto (now Bayer) and EPA argued that the court should dismiss the lawsuit as moot.

The court agreed, but the panel of judges also ruled that the plaintiffs, National Family Farm Coalition et al., should be allowed to fast-track a new lawsuit based on the new 2018 dicamba registration.

An expedited schedule means that a process that often takes years can be compressed into a matter of months, noted George Kimbrell, an attorney for one of the plaintiffs, the Center for Food Safety. That makes it more likely that the court could issue a final decision on the legality of the dicamba registrations in 2019.

"We're resolved to continue the litigation and take the path the court has laid out for us," Kimbrell told DTN.

"This is certainly justice delayed, not justice denied," he added. "The judges didn't say anything about whether the conduct of EPA in approving these pesticides was lawful. So while it's unfortunate that EPA and Monsanto have wriggled out of this for now, we'll continue to fight to protect farmers and the environment."

The National Family Farm Coalition et al. filed a new petition against the EPA almost immediately after the court's ruling. The new petition, like the old one, asks the Ninth Circuit Court of Appeals to rule that EPA violated its duties under the Federal Insecticide, Fungicide and Rodenticide Act (FIFRA) and the Endangered Species Act (ESA) when it re-registered the dicamba herbicide in October 2018.

However, the plaintiffs now face an additional hurdle -- the partial shutdown paralyzing large swaths of the federal government.

The Department of Justice is seeking to postpone any civil litigation that involves the federal government, and this dicamba court case has fallen under that scope, Kimbrell noted.

Specifically, the DOJ's "FY 2019 Contingency Plan" for a shutdown states that: "Litigators will continue to approach the courts and request that active cases, except for those in which postponement would compromise to a significant degree the safety of human life or the protection of property, be postponed until funding is available."

The National Family Farm Coalition et al. will have to decide whether or not to challenge this request, Kimbrell said, since a court can rule against the DOJ's petition. "If a court denies such a request and orders a case to continue, the Government will comply with the court's order, which would constitute express legal authorization for the activity to continue," the DOJ contingency plan states.

The court's final ruling on a new challenge to the 2018 dicamba registration would have a large impact on farmers and applicators. Industry estimates for dicamba-tolerant Xtend soybean and cotton acreage have reached 60 million acres in 2019, and other dicamba-tolerant crops, such as corn and sugarbeets, are expected to be commercialized in the coming years.

As a result, industry groups such as the National Cotton Council, the American Soybean Association and the American Sugarbeet Growers' Association, have all submitted amicus briefs -- legal documents offering relevant information and additional arguments -- in support of Monsanto and the EPA in this litigation.

You can find the Ninth Circuit's ruling here: http://cdn.ca9.uscourts.gov/…. 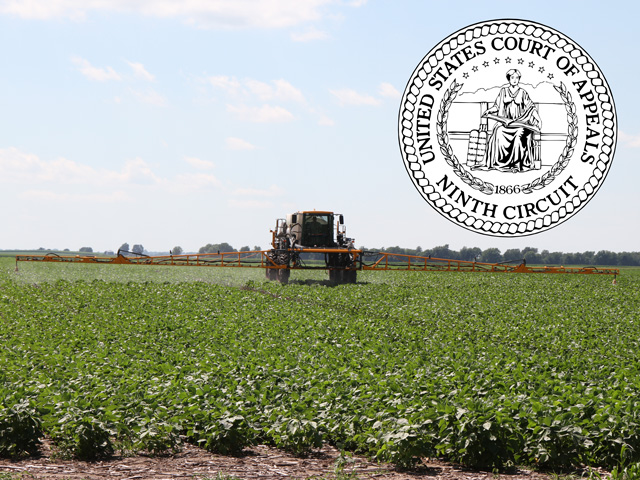