Dale Edgington with Advanced Micronutrients Products spoke at the 2018 Fertilizer Outlook and Technology Conference recently in Jacksonville, Florida, about micronutrients and how these products have a bright future.

Micronutrients have come a long way.

A book from 1963 titled "Manual on Fertilizer Manufacture" only dedicated two pages out of a total of 478 pages to discussing micronutrients, Edgington said. A study from 1976 listed anywhere from 513 metric tons (mt) to about 20,000 mt of micronutrients consumed in the U.S. in 1972, he said.

Today, much more is known about micronutrients and how much really needs to be applied to soil for crop production.

Edgington said copper deficiency has been reported in more than 50 crops and in 51 countries from across the world. Research has shown that wheat noticeably responds to copper applications in 23 countries.

"Our research has shown so far that the U.S. and Canada represent about 80% of the world's estimated market for copper fertilizers," Edgington said.

Of the 700 million acres of crops planted in the U.S., roughly 101 million, or about 14%, are estimated to be deficient in copper, he said. This would be coarse-textured soil, high-organic-matter soils and calcareous soils.

Edgington said that using nutrient removal charts -- if the nutrient removal were the same on all U.S. crop acres -- the copper requirement would be 35,012 tons per year. This represents just what the crop is removing from the soil and does not take into consideration building soil reserves, he said.

Soil sampling, tissue sampling and crop scouting can aid in the looking out for soils suffering from a copper deficiency, he said.

Another important micronutrient is boron. The U.S. Geological Survey identified in 2014 that boron is the most widely used fertilizer micronutrient applied to promote fruit and seed production, Edgington said.

Edgington said calculating the nutrient removal number for the weight average of the top four crops (corn, soybeans, wheat and cotton) leads to an estimated 122,545 tons of market potential for applying boron. He said this means only 24% of the acres receive the boron they need to replace what the crop is removing.

Copper and boron market determination can be looked at based on an estimation of acres that are deficient, while another way to examine the situation is based on what the crop removes from the soil. Neither way is perfect and each could benefit from more data and more analysis, he said.

Iron is the fourth most abundant element in the earth's crust, but often soils are deficient of the mineral, Edgington said. Many soils can be deficient or unavailable of iron when crops need it.

Conditions leading to deficiency of iron are closely related to those of manganese deficiency; therefore, the symptoms of one deficiency can be mistaken for the other, he explained.

Using the same replacement formula, if 700 million acres in North American where to receive an iron replacement application, then the volume equals 636,259 tons of iron sulfate equivalent, Edgington said.

The micronutrient with perhaps the most research on deficient soil is zinc. In 2010, the International Plant Nutrition Institute (IPNI) began collecting information from North American soil-testing labs on the relative availability of zinc in soils.

"Of all the states and provinces reporting, 42% of the samples are below the critical levels for zinc," Edgington said.

The estimated zinc replacement requirements on those 295 million acres are 64,900 tons of zinc sulfate equivalent, he said.

If all 700 million acres where to receive a crop-removal application, the zinc estimate increases to 154,057 tons. If the scope is widened to provide for the projected uptake by all crops, the requirement equals 289,512 tons.

Edgington said there are naturally occurring excesses and deficiencies of micronutrients in the soil, and some can even be man-made.

Each can only be discovered by testing the soil, the crop and the food produced. A balanced fertility program is just as important as a balanced diet for humans, he said.

"There is a greater market potential for micronutrients," Edgington said. 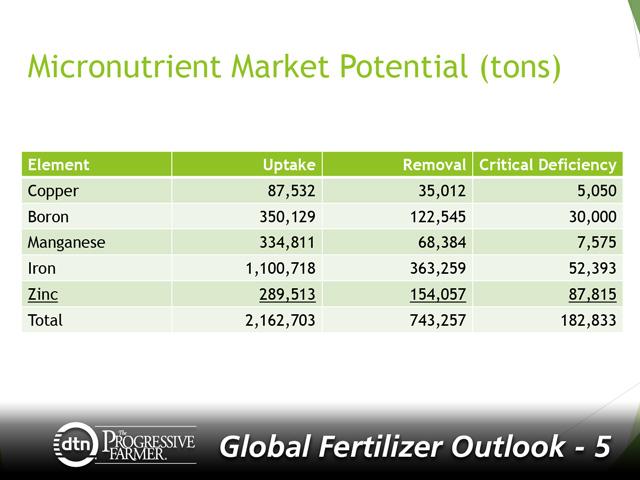