ROCKVILLE, Md. (DTN) -- Imagine having to ask permission every time you want to add an insecticide seed treatment to your corn or soybean seed.

That's been the reality for Ontario grain farmers for nearly three years. In 2015, the Canadian province instituted regulations requiring farmers to prove they have soil pest populations in corn and soybean fields before they can use neonicotinoid seed treatments like clothianidin (Poncho, from Bayer), thiamethoxam (Cruiser, from Syngenta) and imidacloprid (Gaucho, from Bayer).

Ontario's goal -- to reduce neonicotinoid use by 80% in the province to protect pollinator health -- is now well underway.

Most recently, Canada's Pest Management Regulatory Agency announced a proposal to phase out the use of all neonicotinoids in agriculture, across all provinces, in the next three to five years. The proposed ban hinges on the risks these chemicals pose to aquatic insects. EPA has also published concerns about this group of organisms, and the agency is expected to make its final decision on neonicotinoid use in spring 2019.

So how have Ontario farmers fared? Neonicotinoid use has dropped substantially, and many farmers are turning to new, non-neonicotinoid seed treatments. But the experience has not been easy or simple -- for any part of the industry.

Before the government of Ontario passed its neonicotinoid regulations in 2015, Canadian grain farmers were already required to take measures to reduce the dust-off of neonicotinoids during corn and soybean planting, such as mandatory use of a fluency agent on the seed.

Some argue that these requirements worked. PMRA has reported that incidents involving honeybee health have dropped 70% to 80% since 2014. And the agency recently concluded in a series of pollinator risk assessments that neonicotinoid seed treatments could safely stay on the market, as long as farmers continued or added certain risk mitigation practices.

Nonetheless, Ontario passed its regulations, and by 2017, corn and soybean acreage treated with neonicotinoids had dropped 25% in the province, well short of the 80% goal, but still substantial. Another province, Quebec, announced a similar set of regulations in 2015, which require farmers to get a certified agronomist to vouch for a field's need for neonicotinoids before use.

Most recently, PMRA announced a proposal in August 2018 to phase out all agricultural uses of clothianidin (Poncho, from Bayer) and thiamethoxam (Cruiser, from Syngenta) based on the results of risk assessments for aquatic organisms. Since the agency has already proposed ruling out a third neonicotinoid, imidacloprid (Gaucho, from Bayer) in 2016, the new proposal would clear the entire country of all agricultural neonicotinoid use in three to five years, if adopted.

The decision would affect most Canadian farmers who grow cereal and other grain crops, as well as vegetables, fruit and many specialty crops, where neonicotinoids are used regularly to control insects.

DIGGING FOR BUGS IN ONTARIO

For Ontario farmers, though, the latest brouhaha about banning neonicotinoids is old news.

"To me, neonics are already dead and gone -- just from political pressure," said Dan Petker, a grain farmer from Port Royal, Ontario -- directly north across Lake Erie from Erie, Pennsylvania.

At issue are the annual pest assessments required for Ontario farmers to use neonicotinoids in corn and soybeans, he said. They can be time-consuming, difficult and -- because neonicotinoids target mostly soil insects like wireworms, grubs and seed corn maggot -- pretty messy.

"For every 50 acres, we have to put in five traps of a cornstarch-water mix in an onion bag, bury it and come back in a week," explained Petker.

As the mixture rots, it gives off carbon dioxide, which attracts nearby soil pests. The farmers pull up the bags, note the number and type of insects, average them over 50 acres and then send off the results to a chemical retailer -- but only if their bug counts reach a certain threshold.

That threshold was established by lawyers, not scientists, Art Schaafsma, an entomologist at the University of Guelph, is quick to note.

"They just took a threshold out of the sky," he said. "There is no scientific basis for the threshold they used."

The burden will soon shift off farmers, however. The Ontario regulations state that after the 2018 growing season, they will phase in a requirement that only certified "professional pest advisers" will be allowed to do the pest assessments.

Because of the large amount of work involved in the assessments and the certification required to be a professional pest adviser, few agribusinesses or independent agronomists are interested in taking on the job, Petker said. A survey of ag retailers by the Ontario Agribusiness Association estimated that it cost agribusinesses $1.50 to $2 per treated seed acre to satisfy the government regulations on neonicotinoids -- resulting in a total additional cost to the industry of $4.5 million to $6 million a year.

"Let's say they didn't find any insects due to a weird weather variability one year, and when I come back in the spring, my field is full of them," he said. "That's why many companies aren't doing it. It's all on the farmers."

This is not an unlikely scenario, added Schaafsma. The soil pests in question are extremely sporadic and unpredictable. Seed corn maggot, for example, can appear and destroy entire fields of planted seed in a single season -- without showing up in the same field the year before, when testing would have taken place.

"This is a transitory insect," Schaafsma explained. "They go to other things from year to year -- it is an opportunist insect, and conditions have to be just right in the spring for there to be a lot of problems."

These testing requirements also put farmers and retailers in a position fraught with conflict of interest, said Deb Conlon, manager of government relations for the Grain Farmers of Ontario.

"The farmer puts all this pest assessment paperwork together and submits it to his retailer -- which makes his retailer his regulator, which is inappropriate. It puts a farmer at a disadvantage," she said.

As Petker approaches his third year of testing, he has thrown in the towel. "We just stopped using neonics," he said. "It's not worth the hassle. And that's how the government [of Ontario] got their de facto ban -- without actually saying as much."

He's not alone. As a Pioneer farmer-salesman, he has a window into many growers' operations.

"I only had one customer go with a neonicotinoid this year," he said. "And that was only because he was following corn-on-corn with a cereal rye cover crop, and he had spread manure -- so he was facing a very high incidence of wireworms and chafers. Everyone else went with [a non-neonicotinoid seed treatment]."

Nonetheless, seed and agrichemical companies are actively developing and commercializing non-neonicotinoid insecticides for use in seed treatments in Canada and the U.S.

Both Corteva Agriscience's Lumiderm seed treatment and Syngenta's Fortenza use the same active ingredient called cyantraniliprole, a Group 28 insecticide (diamides). Fortenza is available for use in Canada in canola, corn and soybeans to target pests such as wireworm, cutworm and European chafer. Lumiderm is registered in Canada for use in canola and soybeans to control flea beetles, cutworms, bean leaf beetles and soybean aphids.

Most of these non-neonicotinoid seed treatments are already in use in Ontario, as farmers struggle to find the time and resources to conduct soil pest assessments required for neonicotinoid use, Petker said.

This might look like an acceptable resolution for some, but given that the new seed treatments do not target as broad a range of insect pests as neonicotinoids, it could leave some growers with less protection, Conlon said.

Some growers may discover that they don't actually need insecticide seed treatments every year, however. Schaafsma and his colleague, Jocelyn Smith, just wrapped up a multiple-year study involving nearly 100 Ontario farms, which showed few reliable yield benefits from neonicotinoid seed treatments on corn and soybeans.

"We could maybe get a 1% to 2% increase in yield over all those years and all those fields," Schaafsma said. "It was not as high as we expected." Nor did the researchers see a reliable boost in plant vigor, which is sometimes attributed to neonicotinoid insecticides, even in the absence of insect pressure, he added.

At issue is how sporadic these soil insect populations are, Schaafsma noted. The researchers found no seed corn maggot, and only 5% of the locations showed significant populations of more common insects like wireworm and grubs.

Nonetheless, these insects can and do occur occasionally -- particularly in his region north of Lake Erie, where sandy soils abound and soil insects thrive, said Petker.

That's why the test-based system in Ontario might not be the best one for other governments to consider, said Schaafsma. "For many of these pests, there is no threshold, no prediction model," he said. "The whole system that was put forth in Ontario is not working."

Quebec's neonicotinoid regulations, which do not use pest assessments but do require that a certified agronomist vouch for a farmer's need for seed treatments based on field history, could hold more promise as a regulatory model, Schaafsma said.

Nonetheless, Ontario's de facto neonicotinoid ban could soon be a reality for the rest of Canada if PMRA's proposed bans become a reality, Conlon said.

"It puts us at a competitive disadvantage," she said. "For now, with other provinces in Canada, but also in our case, with the U.S., the Great Lakes Basin area."

Petker also wonders how long the new replacement seed treatments can last, if they become the only option for growers across Canada. In Ontario alone, nearly 100% of corn seed and 60% of soybean seed was treated with neonicotinoid insecticides before the 2015 regulations.

"We have no multiple modes of action now," he noted. "Fortenza and Lumivia and Lumiderm are the same class of insecticides. Who knows what else we will have to use?"

Moreover, when planting seed treated with non-neonicotinoid insecticide, farmers are not required to use the dust-off-reducing fluency agent that university trials showed could reduce dust-off by 50% to 60%. Since modern planters still generate a lot of dust at planting, the industry may find these new seed treatments under the same pollinator scrutiny in years to come, said Schaafsma.

"Seed treatments are an elegant solution -- they are a whole lot better than spraying pesticides," he said. "But because of planter design, we are still emitting pesticides when we plant." 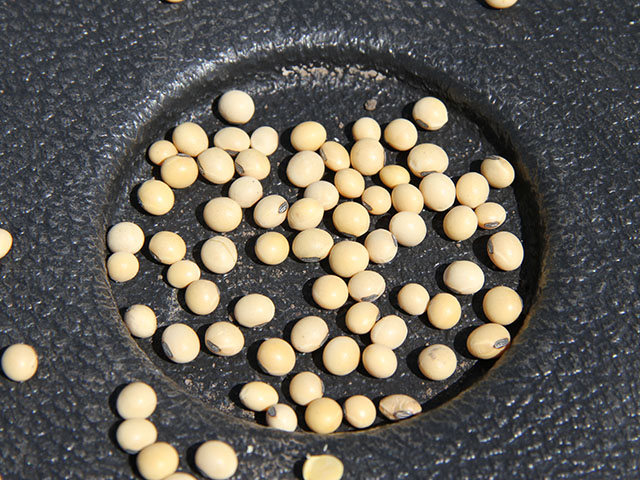