"In 2012, when soybeans were shattering due to dry conditions, the pod can really burst open and the seed can literally spread itself out and you can hear it happening -- it's like popcorn out in the field," said Alt, who works as a research scientist and soybean breeder for Pioneer, now under Corteva Agriscience. "It's a stomach-turning thing to hear because you realize what's happening out there."

Fast forward to 2018 and the same phenomenon of shattered soybeans is plaguing many growers across the Midwest and South. But this time, it's excessive moisture and delayed harvest that's to blame, Alt said.

The science behind shattered pods and dropped beans is a delicate dance between genetics and environment. Alt, as well as University of Minnesota Extension agronomist Seth Naeve, helped us tease out the reasons why this phenomenon is causing so much trouble for farmers this fall.

THE GENETICS BEHIND SHATTERING

In the long battle to free soybeans from their tendency to shatter, soybean breeders like Alt are working against the plant's fierce drive to reproduce successfully.

"Breeders are pulling this trait out of eons of evolution," said Naeve. "Wild soybean plants actually evolved to preferentially throw seed as far from the plant as they could -- and that had to be bred out slowly over time."

Slow is the operative word, Alt noted. Unlike diseases or insects, shattering is difficult to induce in the field, and no single gene or group of genes controls it. Untangling it from the soybean's germplasm is not a straightforward task.

"I've been doing this for over 20 years now, and shattering is something we work on every year," she explained. "Shattering is a lot more like breeding for yield -- you need lots of locations, different environments and replications to study it, and we continue to make nice, slow, steady progress -- slower perhaps than people would like at this time."

Yet breeders have already come a long way, Alt and Naeve noted. "Even just 10 to 20 years ago, shattering was a hugely significant issue," Naeve said. "Now all those lines that had serious susceptibility to shattering have just been removed from the system."

Nowadays, the biggest factor behind shattering is Mother Nature.

The soybean pod is held together by a tough seam that scientists call the pod "suture." The pod suture is used to withstanding the normal wetting and drying that a mature soybean goes through in the fall, when the bean's moisture can vacillate between 8% and 13% within a day, as the air temperature and humidity rise and fall.

But the longer mature soybeans sit in the field, the more wetting and drying cycles they go through, and the weaker the pod and the pod suture become, Alt said. So anything that causes a bean to stand beyond its ideal harvest time will heighten the risk of shattering.

Some of those causes are man-made -- for example, some farmers plant shorter-season soybeans than their region requires in order to stagger their grain harvests, but then can't get them out as early as they had hoped.

But most are weather-driven. In Alt's research territory in Iowa, rains have come fast and furious since August.

"From Aug. 1 to Oct. 8 in my area in Iowa, we have seen anywhere from 3 to 16 inches above the 30-year average rainfall," she explained. "And the majority of that came from Aug. 20 and later -- right as soybeans were maturing."

The excessive rainfalls across wide swaths of the Midwest and South this year have led many soybeans to endure far more dramatic swings in moisture content, Naeve said. "Now the bean is going from 9% to 20%, and now we've increased the size of the seed [with swelling]."

A few repeats of that, and the soybean pod becomes too fragile to withstand its swollen seeds, Alt said. "That pod suture just weakens and breaks open," she said.

Some soybean seeds, especially those that sat under warm and wet conditions for many weeks, have actually sprouted within the pod, adding to the pressure against the pod suture, Naeve said.

As happened in 2012, extreme heat and dryness can also lead to abnormal shattering, Alt added. But in those cases, the pod is more brittle and more likely to launch seeds when it pops open. This year, pods have stretched open more slowly, and many seeds may hang there for a period of time before dropping.

Naeve said he observed one field shattering from a severe case of SDS, which caused the plants to mature prematurely and stand in the field too long before harvest. Other diseases, like frogeye leaf spot or SCN, can also heighten the risk of shattering by compromising the plant's health, he added.

"Once you have stressed plants, they may not function very well and have a good, protective pod on that plant," he explained.

Once soybean seeds drop to the ground, it's game over. That yield is lost.

Some soybeans may still hang from the pod, but they will be at high risk for dropping during harvest or during the wait for harvest, Naeve said. Chances are good that they, too, are lost to the farmer.

Those losses can add up quickly. Kansas State crop scientists estimated that four dropped seeds per square foot of soil surface translates to a loss of one bushel per acre. (See that article here: https://webapp.agron.ksu.edu/…)

Even if the exposed soybeans do make it into the combine, many will be rotted or sprouted, which can lead to discounts at the elevator -- from already depressed soybean prices. Remember that even if the sprout falls off a soybean seed, the bean is already compromised.

"That seed has already converted oils and carbs into sugars," Naeve said. "It will cause problems from an elevator standpoint, with quality issues, and from a storage standpoint, with molding in bins."

Naeve strongly recommends scouting before harvest to see the extent of shattering in fields. If possible, he urges farmers to segregate the worst sections of the farm or field, and resist the temptation to blend those soybeans with better ones.

"Elevators will be really quick to dock soybeans for too high of moisture or damage," he said. "They've got more beans than they can take. The worst thing that can happen is they contaminate their whole crop with their worst beans. Better to take a loss on a small portion than take a loss on the whole crop."

For help on how to adjust your combine to minimize losses when harvesting a field with shattered pods, see this article from Pioneer here: https://www.pioneer.com/… 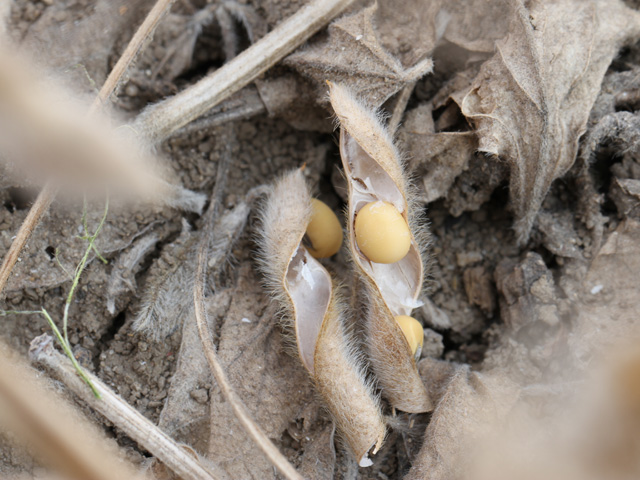