DECATUR, Illinois (DTN) -- The nerve of some pests.

Wayne Martin's soybeans had already been pounded by hail. Then Japanese beetles showed up. Now some newfangled pest called soybean gall midge is eating away in his southwestern Iowa fields.

The situation is literally galling.

Martin said the first sign of trouble is that the soybean stem turns brown and appears slightly swollen at the soil line.

"Peel back the skin of the stem and you'll find a bunch of little red maggots," said Martin, who farms Shelby, Iowa.

"Their feeding forms a gall -- or a scar -- as if the plant may be trying to compensate. Eventually, the bugs win out, and the stem looks as if it has been put in a vise at one distinct point. It shrivels and turns brown and the plant breaks off."

Iowa State University entomologist Erin Hodgson said there were some isolated reports of soybean injury by soybean gall midge in northwest Iowa in 2016 and 2017. There have been other confirmations in past years in Nebraska and South Dakota.

However, the pest appears to have spread to 10 Iowa counties so far this year. "We really don't know a lot about this pest. So we're encouraging everyone to scout and report if they find it, so we can learn as much about it as possible," said Hodgson.

In fact, she said scientists aren't even sure what species it is within the midge family. "You can't use the immature or larvae to identify it and so far, we've been unsuccessful rearing them to adults," she said. Hodgson and others have the culprit under the microscope and in rearing chambers in the Iowa State University insectary.

There are about 6,000 midge species worldwide and about 1,100 known in the United States. Hessian fly in wheat is likely a relative, for example.

The damage in Martin's fields has been most heavily concentrated along field edges. However, in recent days he has seen the injury spread further and further into his fields. "I just can't find anything consistent about it. For example, one of my fields with the most damage borders a pasture, yet the portion of the field near the pasture doesn't show damage," he said.

The plants first look as though they are wilting down, but it doesn't take long for them to go into full tilt distress. The maggots start out creamy white and turn pink and then red as they mature. "They are small, so hard to count, but I've found as many as 40 in one plant," Martin said.

"Midges are really tiny, hairy flies and aren't known to be good fliers. So we are seeing some edge-of-field pattern to their activity," Hodgson said. "However, so far we've not found any other consistency linked to cultural practices." Variety selection, fertility practices, row spacing, planting dates do not seem to influence the pest, she added.

She also said insecticidal seed treatments do not seem to suppress the pest.

Martin is also encouraging farmers to scout and report the findings. "That's the only way I know to call attention to the problem.

"Crop farmers aren't any different than livestock farmers -- we care about those plants. It hurts to see them struggling and not know what to do to stop it," he said.

For more information read a new report from Iowa State University on this pest: 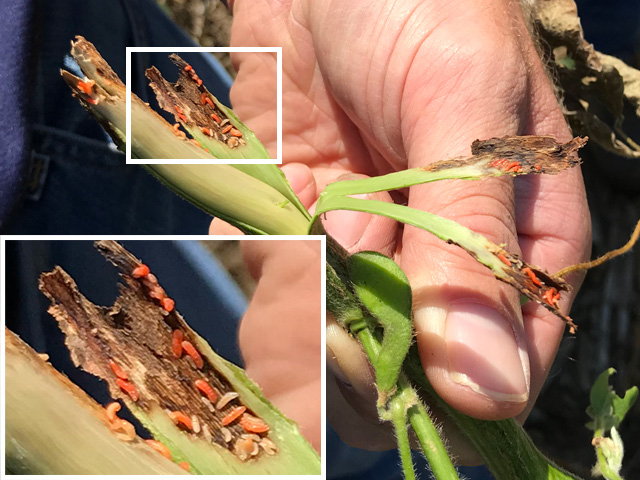