From a sub-tropical corn disease leapfrogging into the Midwest to Bt-resistant bollworms migrating from corn to cotton, these pests demand vigilant scouting.

Here's a quick look at which ones are most likely to crop up in your part of the world.

This fast-moving rust disease made its first appearance this year on July 10 in west-central Missouri, many hundreds of miles from its breeding grounds along the Gulf of Mexico.

The appearance took everybody by surprise. "Because it does not overwinter here, it has to be blown in from Southern states, and we depend on their reports to help us anticipate it," said Tamra Jackson-Ziems, a plant pathologist with the University of Nebraska, which confirmed the disease in the state's eastern counties in mid-July. "For whatever reason, this year it did slip up on us. We don't know yet if it's going to be economically important."

Since mid-July, the disease has been confirmed in seven states: Arkansas, Georgia, Illinois, Kansas, Missouri and Oklahoma. You can track its progress here: http://ext.ipipe.org/….

Although the disease is famous for its ability to race through a field quickly, the threat to your field will depend heavily on favorable weather conditions and the susceptibility of your hybrids. Southern corn rust likes high humidity, plentiful moisture and warm temperatures, so watch your forecast carefully, Jackson-Ziems said.

If you do find the disease in a susceptible hybrid, with the right weather conditions and corn still weeks away from denting, an application might be necessary. Keep in mind that fungicides only provide protection for 21 to 28 days. Read more on how to manage the disease from the University of Nebraska here: https://cropwatch.unl.edu/….

In the South, corn earworms are starting to migrate out of corn and into cotton fields, where they are known as bollworms.

Entomologists in the South are working hard to help farmers deal with the growing problem of Bt resistance in this insect population. Bollworms have developed widespread resistance in Southern states to two Bt proteins, Cry1Ac and Cry2Ab, rendering the three most common cotton varieties, Bollgard II, Widestrike and TwinLink, vulnerable to feeding and yield loss.

Newer, triple-stack Bt cotton varieties (Bollgard 3, Widestrike 3 and TwinLink Plus) all contain a third gene, Vip3A, which is still effective against bollworm, but these varieties aren't available to all cotton growers yet.

For now, entomologists are advising growers to track down the traits in their cotton variety and scout for bollworm accordingly.

For triple-stack cotton varieties (Bollgard 3, Widestrike 3 or TwinLink Plus), growers can instead scout for the later, larval stages of the bollworm, Reisig said.

Populations appear to be lighter in the Great Lakes region compared to past years, when heavy pressure made it clear to many growers that the Herculex trait (Cry1F) was not a reliable source of protection. However, Nebraska growers are seeing fairly heavy moth flights, and entomologists there advise scouting for any growers who have a history of this pest and are not growing corn with the Vip3A gene -- the only Bt trait that controls it.

Growers have a narrow window of opportunity to spray successfully for the pest, as it burrows deep into the protection of the corn ear shortly after egg hatch.

Egg masses in cornfields in the pre-tassel and tassel stage will have the best chance to develop into an infestation, said DTN Research Scientist and Entomologist Scott Williams. "Those are the corn stages when pollen, which the larvae need early on to feed, are most plentiful," he said. "Any time before or after those stages and the opportunity and larvae survivorship gets dramatically less."

Look for tiny, tidy clutches of eggs, ranging in color from pearly white to purple, depending on how close they are to hatching. Scout 20 plants in five different spots in a field, and if you spot egg masses on 5% of the plants scouted, an insecticide treatment may be warranted, Williams said.

See more information on treatment recommendations from the University of Nebraska here: https://cropwatch.unl.edu/….

BEWARE THE LURKERS: APHIDS AND MITES

Some aphid populations in Minnesota are now resistant to pyrethroids such as bifenthrin and Group 3 insecticides like lambda-cyhalothrin, Koch noted in a university newsletter. Growers should scout their fields after an insecticide application to evaluate how well it worked.

Koch urged growers to wait for the economic threshold for treatment: 80% of plants infested with an average of 250 aphids per plant, and rising populations. Spraying any earlier can knock back beneficial predator populations and set growers up for later infestations of both aphids and other pests, like spider mites.

Spider mite populations are also on the rise in soybean fields in drier parts of the country, including states that are airing out after a wet June, such as Wisconsin and Indiana. They can cause yellowing in soybeans with stippling on the leaves, as the mites suck valuable moisture out of the plant.

The pest's tiny size makes for tough scouting. At 0.4 mm wide (1/50th of an inch), they are about the size of the period at the end of this sentence. Purdue University scientists recommend using the "shake test" to find them. At five different locations in a field, shake a plant over a sheet of white paper and look for tiny dark specks scuttling about.

If the pest is present at all the locations and favorable weather conditions lie ahead -- hot, dry and with low humidity -- an insecticide application could help. See the Purdue article here: https://extension.entm.purdue.edu/…. 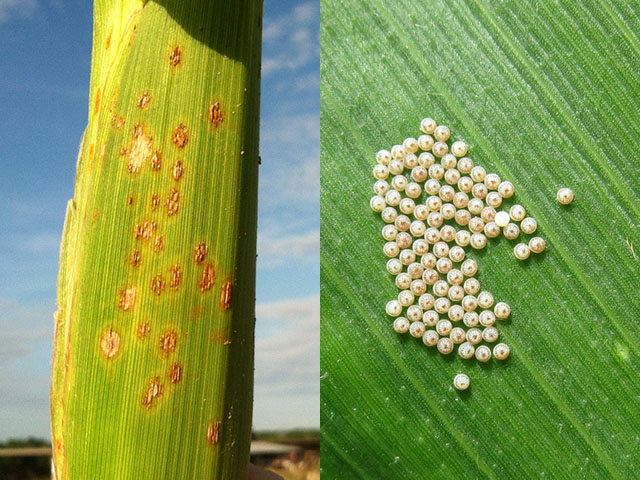