ROCKVILLE, Md. (DTN) -- If you think finding Japanese beetles swarming your corn or soybean fields is a shock, try meeting them on the highway, at 70 miles per hour.

"I ride a motorcycle, and if you've ever taken a Japanese beetle to the face, it's not much fun," said Kris Ehler, a sales agronomist for his family business, Ehler Brothers Company, in east-central Illinois. "It's like someone takes a finger and just hits you hard on the forehead."

This summer is giving Ehler flashbacks to the early 2000s, when an explosion of Japanese beetle populations nearly convinced him to sell the motorcycle.

"We saw an uptick in a few years past, and this year we're just seeing a lot more," he said. "The surprising thing is we're coming off what I would consider a pretty hard winter, but we didn't seen any knockdown in numbers from that."

Entomologists across the Midwest are getting calls on these shiny, green-and-copper-colored little devils, but they're urging growers to stay calm and scout thoroughly before they apply an insecticide to the field.

Japanese beetle infestations "tend to look much worse than they are," said University of Illinois entomologist Nick Seiter. "Soybeans, especially, are very resilient to Japanese beetles."

Remember also that the beetles will always be worst at the edges of the fields and in the upper canopies -- in short, where you're most likely to look.

"Just like us, they won't go any farther than they need to find a meal," Seiter said.

It takes huge numbers of Japanese beetles spread field-wide to do economic damage to your corn or soybean field, Seiter noted.

In corn, the primary concern is silk-clipping. If your fields are at or nearing pollination, sample a variety of spots in the field and count Japanese beetles per ear. If, on average, you find three or more beetles per ear, and silks are clipped to a half-inch or less in a field that is under 50% pollinated, it's time to spray.

In these cases, Seiter recommends just counting silk-feeding beetles together, regardless of species, and spraying if they reach threshold. "The nice thing about this threshold is it goes by the type of damage," he said. "So the same threshold applies, and if you have corn rootworm beetles too, you might get to that clipping threshold faster."

Scouting soybeans requires less math, and more eyeballing. If you find 20% or greater leaf defoliation for post-bloom soybeans, or 30% or more for pre-bloom soybeans, an insecticide is warranted.

A skeletonized soybean leaf is an alarming sight and people tend to overestimate damage, Seiter noted. He recommends taking along an illustration of what varying levels of defoliation actually look to "calibrate your eyes."

See one such guide from the University of Nebraska here:

"Remember that you're estimating defoliation for an entire plant," Seiter added.

Spraying is best used as a last resort -- and it comes at a cost beyond the price tag, Seiter said.

"The one thing to look out for in soybeans is that there are a lot of beneficial insects out there, and putting on a broad-spectrum insecticide without a real target in mind can lead to problems with other pests, like spider mites, later in the season," he said.

Many growers in his region do like to add insecticides to their fungicide pass this time of year, Ehler noted. Consider the insecticide choice carefully, he said. "It depends on the temperature and conditions for the next 10 days," he said.

If your crop has plenty of moisture and good growing conditions, an inexpensive generic pyrethroid is a logical choice, but know its limitations, Ehler said. "Those can degrade rapidly with the high temperatures we're seeing now," he cautioned. "You're not going to see any long-term residual -- you'll get a knock down and not much beyond that."

If you're dry, with no forecast for rain, the risk for spider mites is high, and pyrethroids might not be the best bet, Ehler added. "You want something that has good activity on spider mites, along with a residual."

For help weighing the different factors involved in spraying, such as market price, insecticide price, growth stage and defoliation levels, see this guide from Purdue University: 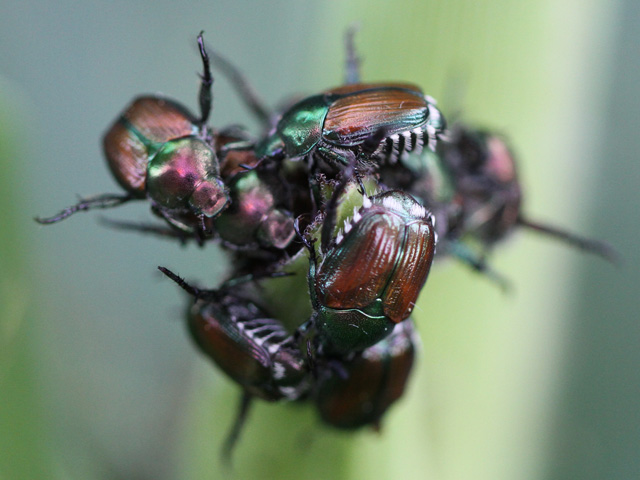