ROCKVILLE, MD. (DTN) -- Global trade has been a boon to U.S. farmers, but it's also turned many insects into international hitchhikers, packing an appetite for American row crops.

The Asiatic garden beetle has been a U.S. resident for a century, but it's now developing a taste for corn roots.

The spotted lanternfly is a newer immigrant; it showed up in Pennsylvania in 2014, and last year it attacked a large range of crops, from grapes to alfalfa. It was also spotted in corn and soybean fields.

Let's start with the lanternfly, whose migration abilities have Midwestern entomologists on high alert.

A BUG OF MANY COLORS -- AND TASTES

Spotted lanternfly is an excellent traveler. No one knows for sure how it migrated to Pennsylvania from Asia, in part because the possibilities are endless.

"What's unique about this insect is it lays its egg masses on any flat surface -- truly anything," explained Kelly Estes, agricultural pest survey coordinator for the Illinois Natural History Survey.

The lanternfly prefers the tree of heaven, a fellow invasive species, but it's not picky. Adults can lay eggs on car bumpers, truck grills, railroad cars -- name a mode of transportation with flat surfaces, and it will work, said Kevin Rice, an entomologist with the University of Missouri, who issued an alert on the insect to growers in his state.

"That makes the likelihood of it showing up anywhere in the country extremely high," he said.

Because the lanternfly feeds on 70 different crops and plants, the USDA is taking the threat seriously. In February, U.S. Secretary of Agriculture Sonny Perdue made $17.5 million in emergency funding available to stop the pest's spread in Pennsylvania, where it has reached 13 counties and caused damage to stone fruits, grapes, and residential properties.

"The PA Department of Agriculture received one report of Spotted Lanternfly damage to alfalfa crops last growing season," she told DTN in an email. "The farmer reported 30% loss of his alfalfa crop and attributed it to Spotted Lanternfly." The farmer also documented the pest's presence in corn and soybean fields. The Department of Agriculture wasn't able to confirm the damage because the fields were harvested before they could be inspected, Powers added.

The lanternfly pierces plants and sucks out nutrients, but its greatest damage comes from the sticky honeydew it excretes, which covers plants and attracts molds, Estes said.

Entomologists and state agriculture officials are urging everyone to be on the lookout for the pest.

Its egg masses are well-disguised -- they look like dollops of gray mud smeared on trees or other flat surfaces. When they hatch, tiny black-and-white nymphs crawl out. As they grow, they become larger and turn bright red with spots, Estes said. At this time of year, the lanternfly will be in nymph form; in late July and August, they will take their final adult form.

"They have bright red underwings and light tan, nearly translucent forewings with spots," Estes explained. They perch on long black legs and can be about an inch long. The result is a bright and unusual looking insect that is easy to spot, Rice noted.

If you find one, contact your local Extension office or department of agriculture, Estes said. The insect is a weak flyer, but an excellent jumper, Rice noted. If possible, collect it in a container filled with alcohol to preserve it, he said.

But be careful -- officials suspect the pest might release cantharidin, the same toxic chemical produced by blister beetles, Rice warned. He advises not killing the insect.

"If you feel you can't capture it, good quality photos are always acceptable, along with details on where exactly you're finding it," Estes added.

See the USDA's alert on the lanternfly here: https://www.aphis.usda.gov/…

By comparison, the Asiatic garden beetle is a drab little fellow. This cinnamon-colored scarab beetle is mostly harmless, but its grubs have a growing taste for corn roots.

"The grubs of Asiatic garden beetle...have been causing annual early-season problems in field crops (predominantly field corn) of Northwest and North Central Ohio since 2012, and this year is no exception," warned Ohio State entomologists in a university news release this week.

The grubs have long been a pest of turf grasses and ornamentals, but now they've been reported in corn seedlings, young soybean plants and even wheat, the entomologists noted.

The grubs favor sandy soils and bed down under the base of the plant. Fields with weed infestations, particularly marestail and giant ragweed, may also be at risk, the OSU entomologists said.

The grubs won't take kindly to your scouting efforts, either.

"[Asiatic garden beetles] are typically smaller and more active," the entomologists wrote. "They will immediately run when unearthed and picked up." 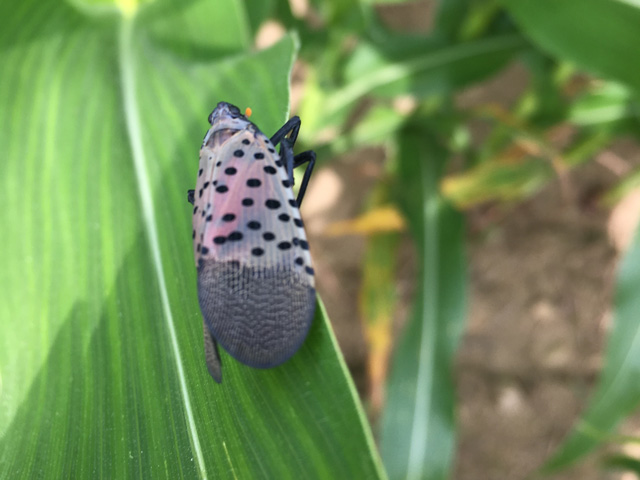