There is scant activity on an early-spring morning on the streets of tiny Paton, in central Iowa. What movement there is on this sunny, chilly day seems to be occurring at the Paton Pit Stop convenience store, on the east edge of town. The Pit Stop is across the street from a John Deere plant that makes planters and disk rippers.

Behind the Pit Stop, several hundred yards to the north, is a second, newer facility, Bauer Built Manufacturing. Founder Vaughn Bauer, the farmer and entrepreneur who began modifying farm equipment 41 years ago, is responsible for the presence of both the John Deere plant (120 employees) as well as his own (60-plus employees) in a town of 230 people.

Bauer and his wife, Lori, built their original manufacturing facility in the garage behind their first house in the middle of town. He started modifying planters and cultivators there and, within a few years, moved to a larger machine shed adjacent to the garage.

In the early 1980s, Bauer first adapted a John Deere planter so a 12-row 30-inch unit could be folded up and transported more easily. He did it first for himself then for other area farmers. Word spread, and eventually, he was adapting planters for dealers and producers around the Midwest. He handled all brands of equipment, generally using his planter units installed on his wider-than-usual planters.

In 1989, Bauer built his own planter from scratch. Six years later, he redesigned the front side of the Bauer Built toolbar to configure any row width. In 2002, he began working exclusively with John Deere on cobranded planters. Eventually, in 2013, John Deere bought out the Bauers. Vaughn Bauer continues to collaborate and work on specialty order projects for Deere from his newer factory down the road.

Meanwhile, at the convenience store, it occurs to me a stool might come in handy on which to seat one, or both, of the Bauers for some photography. Back inside the Pit Stop, I ask the women at the counter if I can borrow one of their sturdy, metal-frame stools for a half-hour, explaining the purpose.

"Sure, you can borrow them," she says with matter-of-fact obviousness. "The Bauers own those stools." Not just the stools, as it turns out. Vaughn and Lori co-own the entire Pit Stop as well as 209 Main, the nice restaurant/bar two blocks away. The couple opened both as their machinery business thrived. Paton had no convenience store/gas station prior, and the restaurant came in handy to feed customers and vendors visiting Bauer Built.

"We were just doing whatever we could to make a living," Vaughn says of the beginning of the business, originally called Paton Machine and Welding. "There wasn't enough farming for all of us," he says of the family operation on which he worked part-time with his father, Verne Bauer. Vaughn started in the business after finishing a year at Iowa Central Community College, where he earned a machine shop certificate. He and Lori, who had been dating since high school, were married in 1980.

"Vaughn was always making something," Lori says. "We spent many weekends back when we were first dating going to antique tractor pulls, where Vaughn and his brother [Kevin] ran the sled." That would be the only pulling sled Vaughn ever purchased, as he has built many of his own design—one used not only across the U.S. but overseas.

It would be a mistake to assume Vaughn and Lori have slowed down in the wake of the buyout. Today, Bauer Built Manufacturing not only handles special orders for farm equipment, it has opened its doors to manufacturing heavy equipment and builds the aforementioned tractor-pulling sleds.

"He's put Paton back on the map," says John McCormick, who farms at nearby Churdan and is president of the Greene County Farm Bureau. "They've created a restaurant and a nice truck stop. And, to get a John Deere plant in a town of 230 people is unheard of," he added.

In 2015, Bauer was recognized with the Greene County Farm Bureau Distinguished Service to Ag Award. "The Deere Bauer Toolbar is used on all 60-foot to 96-foot John Deere planters, which are sold worldwide," the official release reads.

Greene County engineer Wade Weiss moved to the area in 1993 and had occasion to use the Bauers for fabrication work on county equipment.

"They are very community-minded people," says Weiss, "they give back. They are the same people I met in 1993, and they don't act any differently today."

As for the Bauer products, "they are ever-evolving," Weiss continues. "They didn't just have one planter design, make money from it and never change it. It is constantly evolving. Vaughn actually farms, so the products he's using, he's also researching."

Bauer farms an 8,000-acre operation with his son, Adam, and son-in-law Scott Walker. He's most comfortable in the cab of a tractor but is equally at home walking the factory floor interacting with his workers, doing as much listening as he does talking.

"I don't do an office very well," he says by way of understatement.

One afternoon, we caught up with Vaughn planting corn. He'd added a row cleaner unit along with the fertilizer discs. "We're putting 15 gallons of nitrogen 4 inches from the seedbed," Bauer says. "We've never done that before."

This new setup is working well, but the rig is heavy. "If we continue to put nitrogen on like this, the tractor is going to get bigger," Bauer says. As the planting continues, he talks about how the exclusive agreement with Deere in 2002, "put our planters in multiple markets everywhere overnight. In return, I put them in a market of planters [wider] that they wouldn't have gotten into for another five or seven years."

The respect Bauer has from Deere is clear. The Deere Bauer toolbars are the only cobranding John Deere has ever done on equipment in the U.S.

"Vaughn had a customer's understanding of what is needed and designed an innovative toolbar to do that," says Kristi Christensen, who, as factory manager for John Deere in Paton, worked with Bauer. "He built things of quality and ran a really good business -- those are things that made him an enticing partner. Vaughn continues to innovate for us and work on new designs to grow the Deere Bauer brand."

When we left Bauer at the end of the workday, he was still in discussions with coworkers at Bauer Built Manufacturing, and wife, Lori, was still on the job in the factory's office. She often assists in the daily operations of the facility. She gets teary-eyed recalling how she used to make dinners years ago for workers at their first factory, now owned by Deere.

"They would be working late to get toolbar orders finished," Lori says. "I think I get too attached to everyone." Their new factory is equipped with a nice commercial-sized kitchen, but the availability of their nearby restaurant, 209 Main, has reduced the need.

Speaking of 209 Main, we stopped there for dinner at the end of the day. The fried pork tenderloin sandwich, a thin-pounded, breaded piece of meat twice the size of its bun, is a must-eat. Your beer stays cold on a "frost rail," like a mini-frozen river around the edge of what is fittingly named "The Tool Bar." Seems everyone likes a really cleverly designed toolbar. 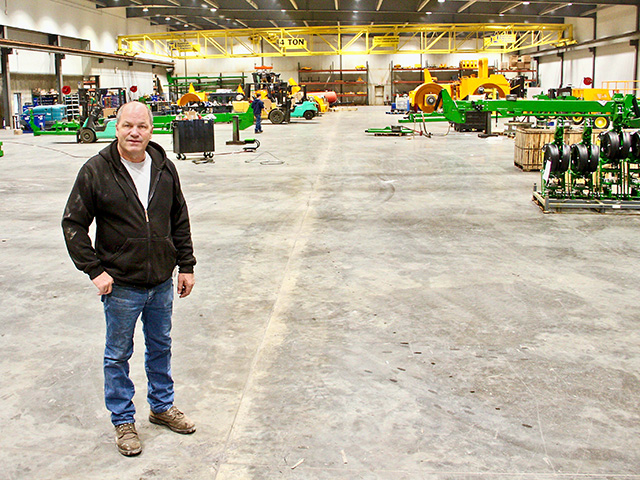