ROCKVILLE, Md. (DTN) -- New research on temperature inversions is changing recommendations for how applicators can safely apply dicamba this year.

A temperature inversion occurs when a cool air mass -- and any particles in it -- become trapped near the ground for hours until the air warms and disperses.

New research suggests that inversions are most likely to set up in the afternoon and evening hours, not mornings, and the air doesn't have to be dead calm for them to develop. Most importantly, scientists from Missouri have shown they can trap pesticide particles in the air for many hours after application.

This latest information comes from weather stations and monitoring networks set up in Missouri and North Dakota, which are measuring inversions around the clock and bringing scientists up to date on how they affect pesticide applications.

DTN checked in with experts from both states for the new details on inversions and how dicamba applicators can avoid them in 2018.

Inversions have long been associated with foggy morning hours. But, thanks to three weather stations in Missouri and seven in North Dakota, we now know better.

"Last year, we observed inversions starting to build around three to four hours before sunset, and so I would tell people that once you get within four hours of sunset, you need to be very observant," said Andrew Thostenson, a pesticide program specialist at North Dakota State University. University of Missouri weed scientist Mandy Bish has found similar results in Missouri since 2015, and said most inversions there set up around 6 p.m.

The North Dakota inversions were usually at their most intense two hours before and two hours after sunset, or roughly 7 p.m. to 11 p.m., Thostenson said. "They actually dissipate fairly quickly in the morning -- usually by an hour after sunrise."

Keep in mind that the labels for the new dicamba herbicides (Engenia, FeXapan, and XtendiMax) only limit spraying after sunset, which is often when inversions are peaking in intensity.

In an effort to understand what happens when farmers spray during inversions, Shea Farrell, a graduate student at the University of Missouri, ran a series of field trials from June-through-August of 2017. He sprayed the new dicamba formulations in evenings, when inversions were underway, and during the middle of the day, when no inversions were present. He took measurements with air samplers in the hours after each application.

The air samplers detected dicamba at higher levels after applications done during an inversion compared to the non-inversion spray periods, Farrell said. That information takes the warnings about spray inversions from theory to reality, said Bish. "We now have the data to show that spray molecules can become suspended in that stable air mass," she said.

Most concerning, however, was the discovery that dicamba remained in the air during their experiments for up to four days, Bish added.

"Shea could detect dicamba in the air for 96 hours following most applications," she said. "So we cannot rule out the possibility that these herbicides can volatilize over time and accumulate in the stable air mass created by an inversion."

Calm, clear skies are a good sign that an inversion may set up, but a little wind can be dangerous, too.

"The wind actually pushes air over colder soils and enhances that cold air mass," said Daryl Ritchison, the interim director of the North Dakota Agricultural Weather Network (NDAWN), which set up the state's inversion-measuring weather stations. "Some of the worst inversions occur when wind speeds are between 2 and 5 miles per hour. It does not need to be dead calm for there to be strong inversions in place."

That is why the new dicamba labels limit spraying to wind speeds between 3 and 10 mph, Bish noted. She said the Missouri weather data showed that about 90% of Missouri inversions occurred when wind speeds where zero to 3 mph.

Be sure to measure the wind speed in the field you're spraying, at boom height, at the time of application, Thostenson added. Wind speeds from local weather stations are often taken at more than 30 feet in the air, many miles from your field.

At least one company, Innoquest, is selling a handheld device to measure temperature inversions in the field (https://innoquestinc.com/…), but there are other good indicators that an inversion is underway.

Use all your senses, Thostenson said.

Dust clouds, or even odors nearby can tell an interesting story. Is the dust behind that pick-up truck rising slowly and hanging in the air, or drifting along in the breeze but not dissipating quickly? Can you smell the neighbor's chickens more than usual? If so, the cool air mass of an inversion could be trapping those particles near the ground.

Inversions also distort both light and sound waves, which can change how your surroundings look and sound. Does that tree line loom larger than usual? Did you catch the whistle of a train you don't normally hear?

"A wind break can look much taller than it is because of an inversion, and the same can occur with mountains or hillsides," Thostenson explained. "The cool temperatures near the ground can also distort sound waves and they project out farther so all noises will project farther, too."

"Moisture in the atmosphere is a gigantic buffering mechanism," he explained. "The more moisture there is, the slower temperatures will move in either direction."

For more help on detecting and understanding temperature inversions, see this webpage from North Dakota State University at (https://www.ag.ndsu.edu/…) and research from the University of Missouri at (https://weedscience.missouri.edu/…). 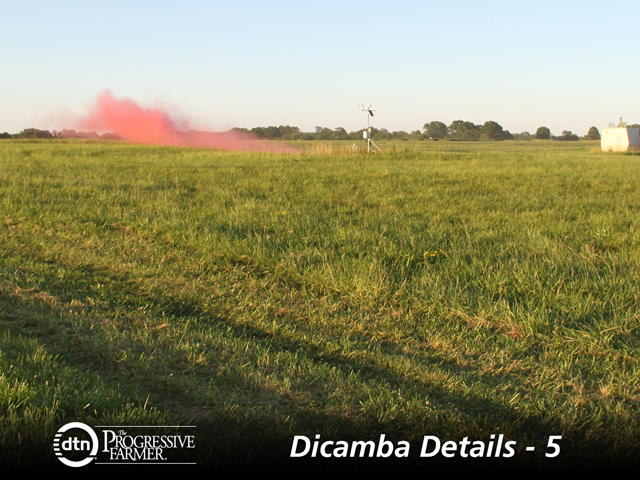