ROCKVILLE, Md. (DTN) -- Dicamba is a tattletale. And the 2017 season taught us just how readily common mistakes can show up as crop injury.

While much of the dicamba drift may have been accidental or beyond human control, some applicators engaged in the use of illegal formulations, improper additives and the wrong nozzles, said Larry Steckel and Bill Johnson, weed scientists from the University of Tennessee and Purdue.

DTN asked both scientists to break down the most common misuses of the new dicamba herbicides: Why they happen, what the consequences are and why they're not worth the risk.

Using older and generic dicamba formulations on Xtend soybeans may seem cheap, but only if you don't do your homework, Steckel said.

The marketing incentives from the manufacturers of Engenia, FeXapan and XtendiMax can help with costs, he explained. "And the other thing, of course, is the peace of mind that you did everything you could to keep dicamba in your field," Steckel added. That may be hard to pin a price on, but fines, civil or criminal lawsuits and ugly neighbor relations will certainly chip away at any short-term savings of generic dicamba formulations.

Because dicamba use isn't new, many applicators mistakenly assumed they could use the same products they used in corn, Steckel said.

"Not only were we spraying higher volumes [in 2017], but we were spraying in higher temperatures in June and July, not March and April," he noted. Dicamba is far more likely to volatilize at temperatures above 80 degrees Fahrenheit, and older formulations are significantly more volatile than the new ones.

"This was eye-opening for everyone. I don't think many will be tempted to use [old formulations] as readily this year," Steckel added.

If they are, some state laws have been put in place to catch them, Johnson warned. Indiana has made all agricultural dicamba products restricted-use pesticides this year, which will allow the state regulators to track all sales of older formulations, as well as the new ones. Missouri is weighing the same restriction.

Certain additives can compromise the reduced volatility of the new dicamba herbicides, particularly ones that change the pH of the herbicide, Steckel said.

The labels of the new dicamba herbicides specifically ban the use of ammonium sulfate (AMS), because it undoes the work manufacturers have done to make the new dicamba herbicides less volatile. "Basically, AMS causes the dicamba molecule in the new formulations to disassociate from the BAPMA or DGA salt, and it becomes a straight acid, which is highly volatile," Steckel explained.

Midwest applicators who use dicamba after they've sprayed a tank mixture of AMS and glyphosate may not realize that they are at risk for drift, Johnson said.

"You've got to get all the AMS out of the tank," he said. "If you don't get it all out, just a little bit can defeat the performance of volatility-reducing agents in new dicamba formulations."

The manufacturers of Engenia, FeXapan and XtendiMax have created websites listing the approved additives for tank mixes, which they link to on the herbicide labels. See them here: http://agro.basf.us/…

The approved additives are primarily herbicides, adjuvants and some nutritional products. Only a very small number of insecticides, fungicides and plant growth regulators are permitted.

Nonetheless, some producers were tempted to cut out a field pass and add their preferred insecticides and fungicides to the tank this summer, Steckel said.

Much of the improper nozzle use in 2017 was likely unintentional -- applicators were often confused over which nozzles were approved to use with Engenia, FeXapan and XtendiMax. Find them here: http://agro.basf.us/…

"From a weed control standpoint, it's really not going to compromise weed control even in a thick stand of weeds," Steckel said. Johnson agreed and noted that pushing the carrier volume up to 15 gallons per acre could help with problematic weeds like pigweed, which must be sprayed when they are small.

Poor dicamba control of Palmer is due more to the weed's physiology, Steckel added.

"You're going to see some escapes and will need some kind of follow-up application," Steckel explained. "You can follow up with another dicamba application or -- because we're finding that these PPO-resistant pigweeds are becoming sensitive to PPO herbicides again after a dicamba pass -- a herbicide like FlexStar will work again." 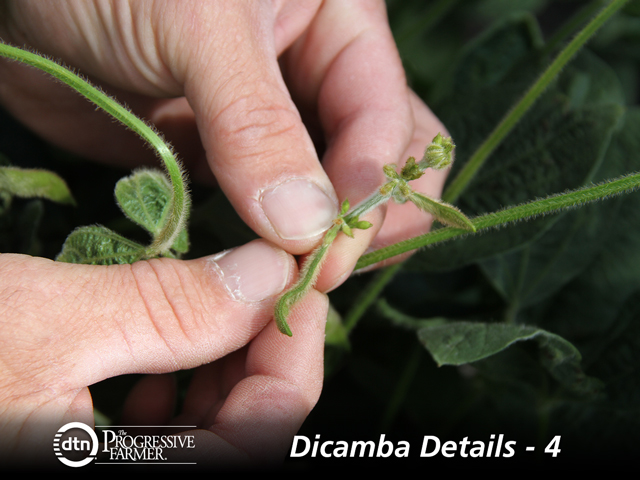