ROCKVILLE, Md. (DTN) -- The cover crop fan club is bigger than you might realize.

Some of the movement's most ardent supporters are less than an inch long and boast six legs.

Insects love cover crops for the food and shelter they provide in what used to be barren, plowed fields, University of Nebraska Crop Protection and Cropping Systems Specialist Justin McMechan explained in a university presentation on cover crop insect populations.

Alas, insects don't filter themselves by usefulness, so both good and bad bugs can take advantage of your cover crop. For every scenario that encourages beneficial insect predators, "you can take out the word beneficial and replace it with pest," McMechan noted. "This is a complicated system."

That's why most entomologists recommend terminating cover crops at least two weeks before planting. This eliminates the "green bridge" that allows insects to migrate from a living cover into the following cash crop.

For growers who are set on "planting green," that is, planting row crops into live cover crops, seed treatments, in-soil insecticide treatments, and careful scouting may be necessary.

Here's a rundown on the many insects you can expect to be crawling through your cover crops, starting with the good, and ending with the bad:

McMechan pointed out a 2017 study from Iowa State that studied fields planted to a winter rye cover crop between corn and soybean rotations. The researchers found a greater abundance of crickets and ground beetles in the rye fields. Ground beetles in particular are a diverse group of insect predators that feed on a wide range of crop pests and weed seeds.

Finally, a Minnesota study from 2015 studied a soybean field planted into live rye cover crop and found significantly lower populations of soybean aphid, thanks to a robust predator population early in the season.

Soil-dwelling pests can thrive in the lush organic matter of cover crop fields. Seed corn maggots do especially well in fields with proximity to feedlots and high levels of decomposed materials, McMechan noted. The seed corn maggot can do great damage to corn seed and seedlings.

Bean leaf beetles can also hunker down for the winter in clover and broadleaf cover crops before a soybean crop, McMechan said. They go on to feed on soybean roots, foliage and pods, and carry a damaging disease called bean pod mottle.

Wireworms are the larval stage of click beetles, which favor egg laying in grassy crops, like rye. Once hatched, they feed on seed, roots, tubers and other plant tissue.

Fortunately, the neonicotinoid insecticide seed treatments that are now standard on all corn seed and most soybean seed target exactly this type of early-season, soil-dwelling insect pest, and remain effective against them, McMechan said.

A number of insect pests have a host range that spans both a cover crop and the following cash crop. Terminating the cover crop often drives them into freshly planted corn and soybeans, where they continue to thrive. These pests require careful scouting and -- in severe cases -- additional insecticide treatments.

The black cutworm lays its eggs in dense vegetation, such as a cover crop might provide, McMechan said. Once hatched, the larvae "cut" small corn seedlings and can kill entire plants.

Finally, the common stalk borer also seeks out grassy vegetation for its egg laying, but during the late summer and fall, when many cover crop stands get started. The eggs overwinter and hatch in the early spring, when larvae can survive on grassy hosts until corn emerges. They then bore into corn stalks, as their name suggests, and feed all summer long.

You can find more information on how cover crops and insects interact from McMechan's presentation, which also covers the unusual discovery of wheat stem maggots feeding on corn following rye or wheat cover crops in parts of Nebraska in 2017. You can find it here: https://bit.ly/…. 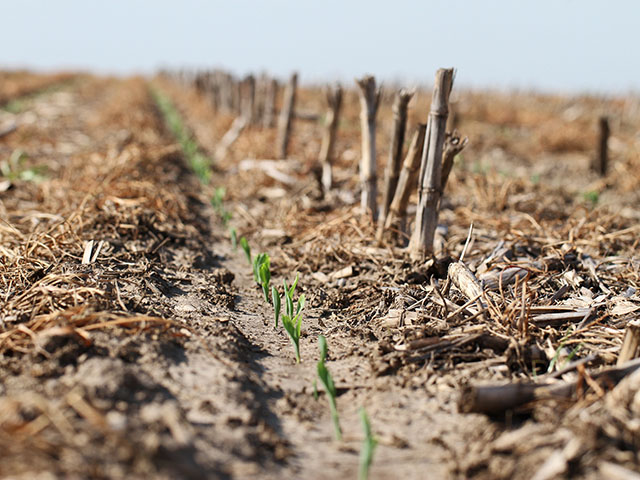