ROCKVILLE, Md. (DTN) -- In a surprise ruling on Good Friday, an Arkansas judge ordered that the state's dicamba restrictions would not apply to six farmers in the state who brought a lawsuit against the Arkansas State Plant Board last year.

"This ruling was nothing we expected," Arkansas farmer Perry Galloway, one of plaintiffs, told DTN. "But we're excited about the opportunity to have the option to use dicamba in season this year."

The state could still appeal this ruling and stay the decision, which would halt the farmers' in-season access to dicamba until the appeal is decided, cautioned Grant Ballard, the attorney for the plaintiffs.

"But I really hope this will bring attention to the fact that these Arkansas producers need a say in this process," he said. "Frankly, it's really a shame that six Arkansas farmers had to pony up and hire a private lawyer to get their interests heard here. The state of Arkansas has to realize that they need to listen to the farmers."

The farmers -- Perry Galloway, Michael McCarty, Matt Smith, Greg Hart, Ross Bell and Becton Bell -- brought their lawsuit in November of 2017, after the Arkansas Plant Board denied their request for a May 25 cut-off date for dicamba spraying as opposed to the state's current rule, banning use of the new dicamba formulations between April 16 and Oct. 31.

Thanks to a recent ruling by the Arkansas State Supreme Court, state agencies like the plant board have precedent to claim sovereign immunity, which means they can't be sued, Ballard explained.

That left Sixth Judicial Circuit Judge Tim Fox little option but to dismiss the farmers' lawsuit, Ballard said. The same logic led another Arkansas judge to dismiss Monsanto's lawsuit against the state plant board in February.

"But the judge added that -- if that's true -- then farmers don't have any opportunity to remedy their damages or appeal decisions of the state plant board, and that is a violation of their due process rights under state and federal constitutions," Ballard said. "So he dismissed the lawsuit, but since that violated these gentlemen's due process rights, he said the order of the plant board is void for these plaintiffs."

That leaves those six farmers with the right -- for now -- to spray their Xtend crops with Engenia, the only dicamba product registered for use on Xtend soybeans and cotton in Arkansas.

Galloway, who has plans to grow up to 3,500 acres of Xtend soybeans this year, said he expects intense scrutiny of his dicamba use, and he has invited experts to oversee his applications to ensure they are safe.

"If the six of us can make legal dicamba applications in the state, then I know we'll be under a lot of scrutiny," he said. "That's why I've invited anyone who wants to participate to please join in."

Galloway, who is licensed as a commercial aerial applicator, said he doesn't believe any of the six plaintiffs will engage in custom or commercial applications of dicamba.

"I don't think anyone would ever go down that road," he said. "To my knowledge no one has any intent of pushing the judge's ruling to the limit. It's for our farms and our farms only."

The judge's decision is not necessarily the final word on the farmers' access to dicamba this year.

"If the state were to appeal this decision, then most likely the plant board would ask to bar the implementation of the order until the appeal is decided," Ballard noted.

You can find details on the farmers' lawsuit and filings here: https://bit.ly/…. The judge's decision is likely to be filed and available for viewing before April 6. 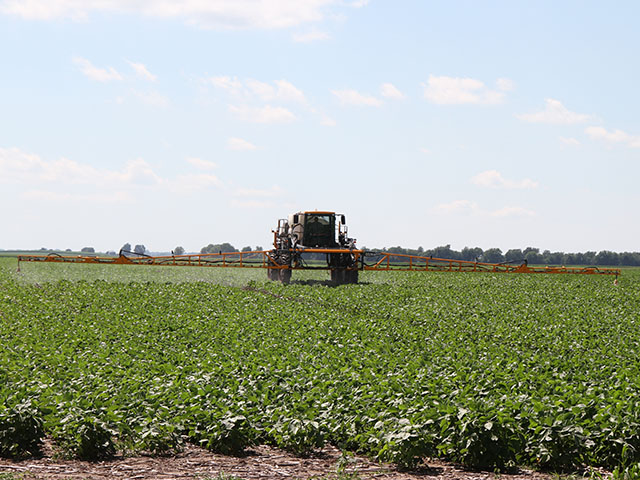