ROCKVILLE, Md. (DTN) -- If bugs snored, the din from your corn and soybean fields would be deafening right now.

But they don't. So it's easy to forget that those quiet acres are teeming with overwintering insects, from tiny yellow rootworm eggs to the fat, glistening white grubs of the Japanese beetle.

Let's brush up on the most common pests bedding down in your field-wide sleepover this winter:

Don't count on recent rains or cold weather to bother them, either. "They are pretty well adapted to surviving our winters and flooded conditions this time of year," Seiter said. "But a big rain during egg hatch could help." Egg hatch will occur for most Midwestern growers sometime between late May and early June, depending on spring temperatures.

For growers in the Great Plains and Great Lakes region, the western bean cutworm may also be overwintering in the pre-pupa stage, particularly in sandy soils. The moths will lay eggs from late June through August, and the caterpillars will go to work on corn ears from late July into September.

And don't forget about the European corn borer, whose larvae still huddle in corn stubble to survive the winter in some Corn Belt fields.

All three of these pests are targeted by the Bt traits in most corn hybrids, but only the corn borer is still completely controlled by Bt proteins.

The western corn rootworm has evolved widespread resistance to the Bt traits Cry3Bb1 and mCry3A, and even more powerful pyramided Bt products are weakening in hotspots in Iowa and Minnesota. See the DTN story here: http://bit.ly/….

Likewise, the western bean cutworm has eaten through the efficacy of Cry1F, the Herculex trait, in recent years. Only Viptera corn hybrids protect against this pest. See the DTN story here: http://bit.ly/….

Wedged deep in the soil and curled up tightly, those fat, white grubs are as distinctive as they are annoying. Before they develop into their final beetle form -- usually Japanese beetles or May/June bugs -- they can feed on corn and soybean seedlings.

Their skinny little friend, the wireworm, is also a beetle baby -- it develops into click beetles.

Both wireworms and white grubs are usually controlled by the neonicotinoid insecticides on most corn and soybean seed, Seiter noted. But in fields with a history of grassy species, like turf, cover crops, pasture or corn-on-corn, they can become numerous enough to cause real problems, he added.

On a slimier note, slugs have been on the rise in corn and soybean fields in recent years, particularly in the eastern margins of the Corn Belt, in states like Pennsylvania, Ohio and Indiana. Slugs can overwinter under crop residue in all their life stages, from eggs to adults. Expect them to start moving (and eating) in the early spring. They are extremely difficult to control -- see a Penn State article on them here: http://bit.ly/….

The soybean cyst nematode is likely lurking in the soils of most Midwestern soybean fields -- and it's more dangerous than ever. A 25-year study from Iowa State University has found that most SCN-resistant soybean varieties now provide far less protection: http://bit.ly/….

Less commonly, the dectes stem borer might also be tucked inside soybean stubble in the larval stage. They are stubbornly hard to treat, so consider narrow rows and an early harvest to discourage lodging, Seiter said.

Another sporadic but troubling soybean pest is the bean leaf beetle. It overwinters as an adult and can cause damage to beans throughout the growing season. Neonicotinoid seed treatments have proved a good control option for farmers with a history of this pest.

Stink bugs probably won't be bedding down in your fields this winter, but they won't be far away.

"They're more likely to leave the field and seek out leaf litter, tree bark and other plants to overwinter as adults," Seiter said. "The brown marmorated stink bug does it especially visibly, in homes in addition to leaf litter and tree bark."

These smelly nuisances will start creeping into crop fields during the reproductive stages of corn and soybean crop, he added.

Farther south, the redbanded stink bug successfully overwintered as far north as northern Louisiana last year, thanks to a mild winter. The resulting early and heavy populations were extremely damaging to soybean growers in the mid-South. See the DTN story here: http://bit.ly/….

Fortunately, this winter has proven significantly chillier and entomologists are optimistic this difficult pest will have to migrate up from more sub-tropical regions to reach southern soybean fields. See an article from the University of Arkansas here: http://bit.ly/…. 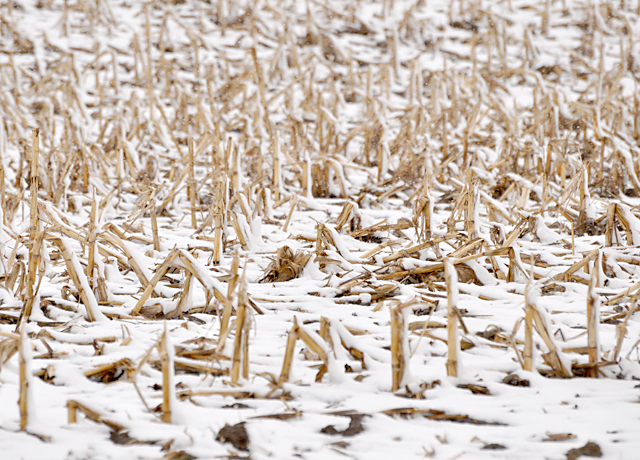