"For years we rode the high-population, high-yield train and we've hit a wall," explained John McGillicuddy, an agronomist with McGillicuddy Corrigan Agronomics. "When we overpopulate fields, we're diverting resources away from the part of the plant we actually get money for -- the seed."

Many years and acres of research have convinced McGillicuddy that with precise seed placement, growers can maximize yield with far fewer beans than ever before.

HOW LOW CAN YOU GO?

To start your soybean diet, rethink the conventional wisdom that you need 100,000 plants per acre at harvest to maximize yield, McGillicuddy said.

He cites a recent field trial where the farmer ended up with two populations at harvest: 73,000 and 109,000 plants per acre. They yielded the same.

"If we space them evenly and let them do their thing, we can put more pods on a single plant without tying up more resources in extra stems, extra roots, all those parts of the plant that you don't get to sell," he explained.

It's a lesson Virginia farmer Stephen Ellis has taken to heart for several years now. Last year, the beans in his 70,000-seeds-per-acre strip test brought in his best yields at 87 bushels per acre. That convinced him to drop his total seeding rate to just 110,000 seeds per acre across all his April-planted beans this year.

So far in their research, McGillicuddy and his farmer customers have not found a downside yield effect in their low-population field trials. "We just haven't gone low enough yet," he said.

Ellis has. It took dropping the seeding rate to 35,000 seeds per acre before he saw a yield effect. But even then, the yield monitor only dropped to 72 bushels per acre.

"When I looked at those beans during the summer, I thought I'd be lucky if they grew 30 bushels per acre," he said. "But we had a great growing season and they just looked like little bushes scattered about."

Those thinner fields do require a little extra care during planting. Uniform seed placement is key.

"You really need a planter that can space properly, because if you're buying expensive seeds, you've got to be precise," McGillicuddy said. He also recommends a good seed treatment package and diligent pre-emergence weed control.

But don't throw in the towel if you don't own the perfect planting equipment, said Ellis, who currently uses a no-till drill to plant his soybeans.

Ellis has plans to buy a new corn planter and use the older one for soybean planting in the future. But, for now, his lower population bean fields have still paid off.

LATER IN THE GAME

Ellis follows the conventional wisdom of upping his seeding rate for his late-planted double-crop soybeans, anywhere from 120,000 to 180,000 seeds per acre.

But this year he's doing some test strips with lower populations to see if that's truly necessary.

McGillicuddy is increasingly convinced that it may not be.

"We're not seeing an advantage to higher seeding rate at later planting, but I think that's because we're too high to begin with," he explained. 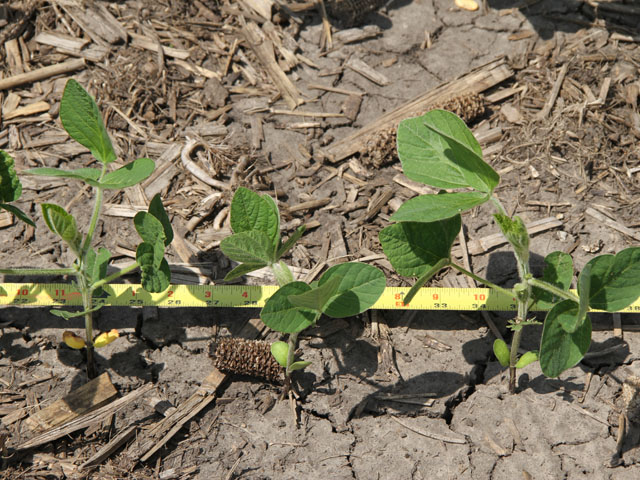