ROCKVILLE, Md. (DTN) -- It took more than a decade, but high oleic soybeans are finally here to stay.

Although 2018 will be the first year with no regulatory barriers to the GM varieties of high oleic beans, many farmers already have experience growing them.

"This is going to lift some of the hesitancy we faced with some large oil customers," he said of the EU's regulatory approval. "It's going to give us a tailwind moving into 2019."

THE LURE OF PREMIUMS

While the food industry favors the healthy, shelf-stable oil properties of high oleic soybeans, farmers are attracted to the promise of premiums in the midst of tough financial environment.

In 2018, farmers with Plenish contracts can expect premiums ranging from 40 to 50 cents per bushel, Buckallew said. The participating processors -- ADM, Bunge, CHS and Perdue Agribusiness -- are working with growers primarily in Indiana and Ohio, but also as far east as Delaware, Pennsylvania and Virginia.

Next year, Pioneer hopes to expand Plenish acres into larger soybean-producing Midwestern states like Illinois and Iowa, Buckallew said. "Now that we have full [regulatory] approval, we could see some new geographies along bigger export corridors like the Mississippi River," he said. Plenish beans are available in Groups 2.0 through 4.6, which makes them suitable for most Midwestern growers, he added.

Calyxt, which is partnering with FBN for seed distribution, hopes to contract with 100 farmers in states like Minnesota and North Dakota this year to grow tens of thousands of acres of its Group 1.9 high oleic soybean, said Chief Commercial Officer Manoj Sahoo. Calyxt buys back the grain from farmers at harvest, and offers a premium over the Chicago Board of Trade, which has produced premiums ranging from $1.50 to $1.80 per bushel over local basis for its growers, Sahoo added.

Monsanto declined to estimate the acres or premiums Vistive Gold growers might see this year, as the company is still finalizing processor contracts for 2018. Soybean Launch Lead Lisa Streck said the company will have soybeans ranging from Group 2.6 to Group 4.1 available.

Plenish soybeans are still based on Roundup Ready 1 germplasm. "Within the next few years, we expect we'll be working with an Xtend-Plenish stack," Buckallew told DTN.

Vistive Gold soybeans are based on the Roundup Ready 2 platform, and the company is targeting 2019 for the addition of the Xtend trait, Streck said.

But for now, high oleic soybean growers will be vulnerable to dicamba, Buckallew noted. "That will be a factor in terms of management this year, no question," he said.

Last year, an estimated 3.1 million acres of soybeans were injured by off-target dicamba movement across 24 states. Monsanto has stated that Xtend soybean acreage will reach 40 million acres this spring, and many farmers and industry experts expect the problem to continue in 2018. 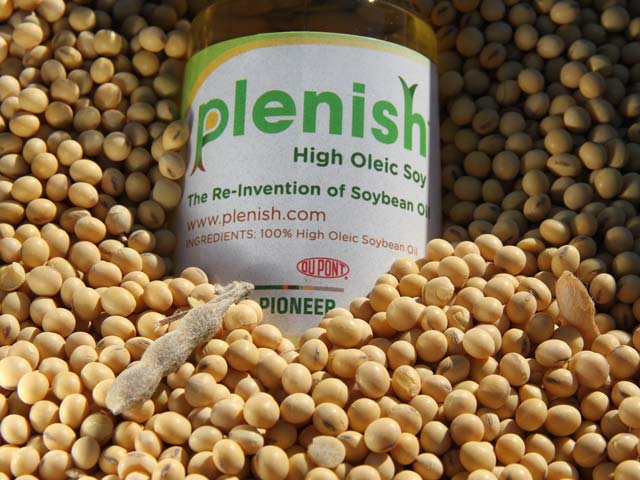