ARLINGTON, Va. (DTN) -- State pesticide regulators and departments of agriculture are struggling to manage the workload of hundreds of 2017 dicamba injury investigations as well as looming decisions on how to restrict and manage dicamba use in 2018.

"I represent state lead agencies with pesticide control officials, and my charge is to try to look after them, and this can't happen again," said Tony Cofer, president of the Association of American Pesticide Control Officials (AAPCO) and a pesticide director with the Alabama Department of Agriculture and Industries. "We cannot survive it, and I am not overstating that. If you have a staff of two and you have 150 dicamba complaints, that's not manageable."

Cofer's comments came during a routine meeting of the State FIFRA Issues Research and Evaluation Group (SFIREG). The group, convened under AAPCO, is charged with researching and advising both state and federal regulators on pesticide management and safety. The dicamba injury crisis of 2017 dominated the group's two-day meeting in Arlington, Virginia, on Sept. 18 to 19.

The committee soon will make a formal recommendation to EPA regarding dicamba use in 2018. EPA had several members in attendance. They stressed the agency is taking the problem seriously.

"[EPA] is very concerned with what has occurred and transpired in 2017, and we're committed to taking appropriate action for the 2018 growing season with an eye towards ensuring that [dicamba] technology is available...for growers, but that it is used responsibly," said Reuben Baris, who works in the herbicide division of EPA's Office of Pesticide Program's registration division.

Baris also promised that a decision from EPA on dicamba use is coming in time for growers to make the appropriate seed and herbicide decisions for 2018.

"We're working as fast as we possibly can to bring negotiations [with the dicamba registrants] to closure so that everyone has the same information for the 2018 growing season," he said.

Over the course of four hours on Tuesday, the working committee fleshed out a number of potential regulatory changes state agencies may need to regulate dicamba successfully next year. They included restricted use pesticide classifications, mandatory applicator training, labeling revisions for the herbicides, a chemical marker to distinguish the use of new and old dicamba formulations and data to differentiate between the different ways dicamba can move off-target.

However, much of the discussion centered on evaluating just how significant the dicamba injury reports have been for states this year.

Dicamba injury complaints have now topped 2,610 in 24 states, according to the latest information gathered by Virginia pesticide control officials.

"We are in unprecedented, uncharted territory," said Andrew Thostenson, a pesticide program specialist with North Dakota State University Extension. "We've never observed anything on this scale in this country since we've been using pesticides in the modern era."

In states where the dicamba injury claims have soared above 100, state regulators are overwhelmed.

"It's almost impossible to respond adequately to that number of complaints given current staffing levels that the [state] departments of agriculture have," Cofer said.

Some regulators expect next year to bring even more problems, said Paul Bailey, director of the plant industries division of the Missouri Department of Agriculture. In 2018, dicamba-tolerant soybean acres are expected to more than double to 40 million to 50 million acres. Dow AgroSciences' 2,4-D-tolerant crop and herbicide system known as Enlist will also be in corn and cotton fields, and possibly soybean fields, pending import approvals.

Nor are soybeans the only crop at risk for dicamba damage. Missouri regulators are conducting injury investigations for peach orchards, vineyards, peanuts, watermelon and black-eyed peas, Bailey said.

Bailey and others noted that the current count of formal dicamba injury complaints from states does not represent the total damage from dicamba injury this year.

"We are kind of getting the idea that one out of 10 farmers affected are actually filing complaints with our office," noted Carrie Leach, quality assurance director for the Office of Indiana State Chemist, which is working on 126 dicamba investigations.

If all the farmers with dicamba injury had filed their complaints in Missouri, the state's 311 complaints would likely have rivaled Arkansas, which has seen 966 complaints, added Bailey.

On top of investigating the thousands of dicamba injury reports across the country, state regulatory agencies are trying to craft dicamba use rules and restrictions for 2018 in time for growers to make timely seed and herbicide decisions.

State investigators do not have enough information to differentiate between the multiple types of dicamba injury, from physical drift to volatility, tank contamination or off-label use of older dicamba formulations, Scott said.

Volatility -- the evaporation of a chemical, which can then move off target -- is of special concern, because it is beyond applicator control, Scott noted. The new dicamba herbicides are designed to be significantly less volatile than older formulations, but independent research from a number of universities has shown that the new compounds do still volatilize.

Trying to determine off-label use in a damaged field is also complicated by the dicamba herbicide labels, which Scott called "convoluted and actually contrary to themselves in certain areas."

Investigators aren't likely to have all the answers in hand before the states must adopt official dicamba rules for 2018, Cofer added.

"I know that the science hasn't necessarily caught up to where we are in the process," he said. "Regulatory decisions are probably needing to be made sooner than later that will affect next year's growing season...So the agencies concerned are going to have to make decisions probably before all the information is gathered."

The working committee also quizzed state pesticide officials on the types of education they required of applicators before the season, to determine if a certain protocol had been more successful and should be required for next year.

Like most issues with dicamba, connections between education and damage were not clear, however. Derrick Lastinger, a program director for the Georgia Department of Agriculture, attributed the state's zero dicamba complaints to its rigorous education and training instituted for 3,000 applicators in the state.

Dwight Seal, a district manager with the pesticides division of the North Carolina Department of Agriculture and Consumer Services, said some farmers opted not to spray dicamba after going through the state's online training course, a phenomenon echoed by Georgia's Lastinger.

"I think the training really did reinforce the requirements and did perhaps scare some folks away from using this technology," Lastinger told the committee.

Ples Spradley, a pesticide assessment specialist with the University of Arkansas, noted that Arkansas had rigorous training efforts as well, including spray clinics, an online training module and mandatory test, but it is still facing nearly 1,000 dicamba injury investigations. That state appears to have been a significant user of post-emergence dicamba in 2017.

You can see the full SFIREG working committee's meeting minutes at the AAPCO website here: http://bit.ly/…. 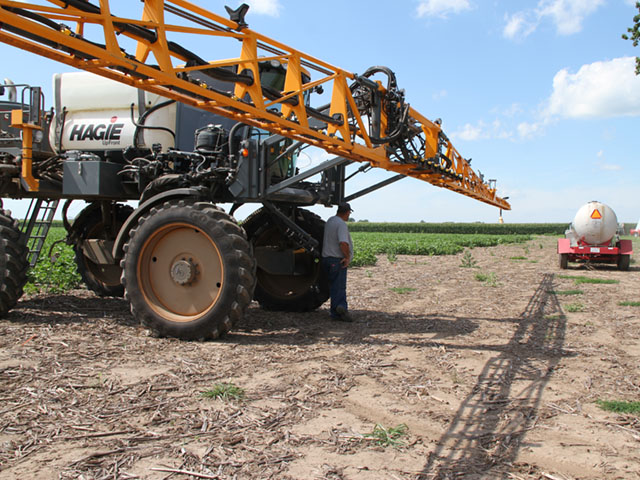