MONHEIM, Germany (DTN) -- Liam Condon, Bayer's president of the Crop Science Division, said the company is making progress on the planned acquisition of Monsanto. But he told journalists attending a global conference that the company now expects to close the deal in early 2018 rather than late 2017.

Bayer filed an application Sept. 18 to extend the European Commission's review deadline by 10 working days until Jan. 22, 2018. He said the aim of the request was to facilitate "an appropriate evaluation given the size of the transaction."

It's been slightly more than one year since Bayer announced it had signed a definitive agreement to acquire Monsanto for $66 billion. In response to a DTN question, Condon explained that Bayer has also pledged to divest overlapping business assets representing up to $1.6 billion in annual sales if necessary to answer antitrust concerns. In a separate agreement, Bayer has guaranteed Monsanto a $2 billion termination fee if the sale fails to go through, Condon said.

On Aug. 22, the EC initiated an in-depth investigation of the takeover, saying it was concerned about competition in various pesticide and seed markets. Earlier this year, Bayer indicated it would be willing to spin off its LibertyLink herbicide and seeds and traits portfolio. But Condon told DTN during an interview session with American journalists that regulators have yet to rule and that divesting LibertyLink is "not a done deal."

Condon also noted that the company had been in discussion with multiple parties about potential spinoffs. However, he noted that regulators will also be taking a hard look at any sales transaction to makes sure the purchasing company is strong and can provide adequate competition in the marketplace.

Condon refused to divulge what the name of the new combined entity might be. However, he did say that an announcement of the name would be among the first things revealed when the transaction is complete. "I can confirm that we are very proud of the Bayer name," he said.

The Bayer Crop Science Division will face volatile global markets for the rest of the year, Condon predicted. He blamed insecticide and fungicide sales in Brazil over the past two years as the reason for declines in profits.

The conference continues Wednesday. The event, Future of Farming Dialogue, brings together thought leaders and stakeholders from across the agricultural industry to focus on making the world's food system more sustainable. 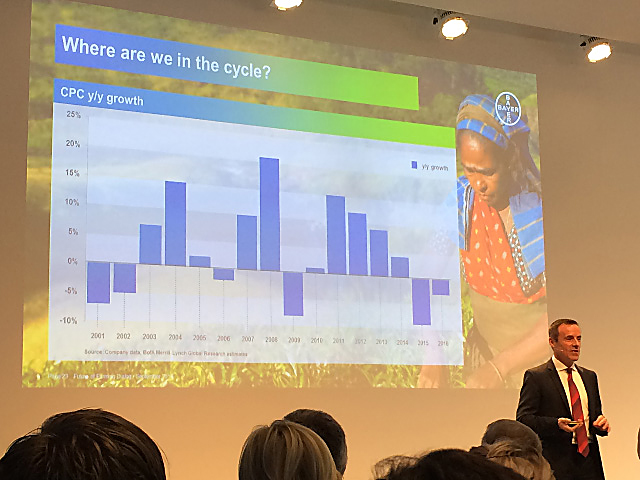