ROCKVILLE, Md. (DTN) -- Don't be fooled by that handsome stand of corn flying past your windshield.

Delve deep into the field, peel back some husks and the stresses of the season may quickly become visible.

From severe tip-back to stunted ears or empty cobs, many growers are finding the consequences of spring flooding, replanting and drought stress in their crop. For help diagnosing the causes behind abnormal corn ears, we turned to Purdue University corn agronomist Bob Nielsen.

As one of the most common ear complaints, tip-back has a broad range of potential causes, Nielsen said. "Any kind of stress that has big impact on photosynthesis can cause tip-back," he explained.

The silks attached to the base of the corn ear emerge first, and those at the tip, last. That leaves the tip silks (and resulting kernels) especially vulnerable to being discarded from mistimed pollination or a plant lacking the resources to fill them, Nielsen explained.

One of the most likely culprits this year is drought stress, particularly during or after pollination, he said. A large swath of the Midwest, from the Dakotas down across Iowa, Illinois and Indiana, experienced dry or droughty conditions in July and August this year.

Other possibilities are nitrogen deficiency, stemming from flooding in the spring and early summer, or foliar diseases, Nielsen said.

"Both would put a lot of stress on a plant to produce enough carbohydrates to fill those kernels, and the kernels near the tip, which are younger and tend to be more vulnerable to stress, abort more easily," he said.

Harder to diagnose are corn ears with a handful of kernels scattered around the cob, a strip missing down the side (zipper ears) or no kernels at all. They are especially frustrating when neighboring plants have well-developed ears.

Years ago, when rootworm beetle feeding on silks was more prominent, scattered kernels or empty cobs could occur, Nielsen noted. This year, these empty or near-empty ears are more likely "unusual consequences of drought," he said.

Early in the summer, many cornfields sat in saturated or flooded fields for weeks at a time. As a result, root systems were stunted, seedling diseases took hold, and soil crusting hampered emergence.

Those tough early circumstances may have come home to roost in many fields, Nielsen said.

Some of those compromised plants likely never developed. But the ones that held on have become a special kind of weed.

"They may have put on half an ear, or tried to, but just remained outcompeted by the healthier or replanted plants around them," Nielsen explained. "It's the hit-or-miss nature of how stress impacts each plant."

Zipper ears are even harder to diagnose, because they don't follow the typical rule of kernels aborting from the top down. They have, however, been linked to severe drought stress, poor soil moisture and uneven heating of the corn cob. See an article by Nielsen on this phenomenon here: http://bit.ly/….

Small or stunted corn ears may take a serious bite out of yields this year.

They are not be confused with the less common "beer can ear" phenomenon of squat and fat corn cobs, which has been linked tentatively to cold snaps in the month of June, when ear size is being determined, Nielsen said.

Small ears this year are most likely additional victims of the early flooding and drought conditions, Nielsen said. Shallow root systems were quickly overwhelmed when dry conditions started in July.

"Many fields were pollinating at full height when the rain shut off," he explained. "Severe drought stress symptoms then kicked in shortly after pollination, which could produce short cobs as well as poor kernel set."

If your corn plant is starting to resemble Medusa, you can safely blame crazy top. True to its name, this mildew disease produces wildly tangled and overgrown tassels or corn ears that are hard to miss in a field.

The water-borne spores of crazy top infect plants early in the season when standing water is present, but it doesn't make itself visible until the later stages of tasseling and ear development, Nielsen said.

"You will often see it around the edges of wet holes in the field, where the center plants drowned, but the plants that survived on the edges in standing water developed it," he said. See more on crazy top from the University of Illinois here: http://bit.ly/….

Never count out your conventional insect and disease pests when evaluating ugly corn ears. Of the likely insect offenders, western bean cutworm numbers were especially high this year in states bordering the Great Lakes, such as Michigan, Indiana and Ohio.

The pest burrows into corn ears and feeds on the kernels, producing damaged or missing kernels and frass where they fed. At this time of year, you may even find the caterpillar culprits themselves, still feasting away. See more on western bean cutworm feeding from Purdue here: http://bit.ly/….

Nielsen said he has already spotted some diplodia ear rot, the white, cottony mold that starts at the base of a corn ear and creeps upward.

"When the corn plant is still green, those infected ears' husk leaves die, so as you are walking down a row, you can easily spot this dead ear," Nielsen said.

Given forecasts for a cool September, growers should be alert for ear molds this year, he added. "That will slow down crop maturity and grain dry-down, so if there are ear rots, it will give them more time to develop," he warned. 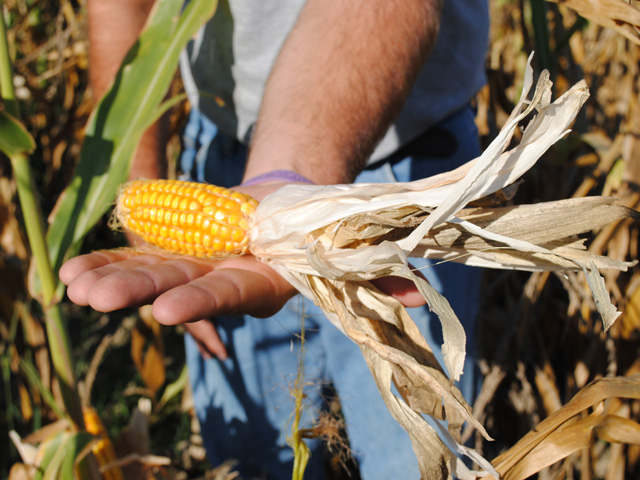