August makes for a lot of interest in yield estimates. Recent USDA and other estimates have many of us wondering how many bushels are out there.

With all the hot and dry weather my area of eastern Nebraska experienced from late May to mid-August, the loss of corn yield has been on my mind all summer.

When estimating corn yield, a count of 32,000 ears (population), 560 kernels per ear and 90,000 kernels per bushel equals 200 bushels. I and my neighbors were out last week checking ears and counts and assumed a 32,000 population after dropping 34,000 at planting. We discovered that all fields seemed to be averaging around 550 kernels per ear, which put the crop in the 200-bushel range. Yields aren't as good as 2016 but better than we expected. Ear size was a surprise considering how dry and hot it was in July, and tip-back was less than expected. What we don't know yet is kernel depth and plumpness. But with the rains and cool weather after mid-August, I am no longer worried.

The most well-known method to estimate corn yield was developed by the University of Illinois. The Yield Component Method is simple and involves using routine counts (not size or weight) on a thousandth of an acre and 90,000 kernels per bushel.

You can use a tape measure, but I find it easier to cut a length of rope and knot both ends with the correct length and lay it along a row inside the field at least 50 to 100 feet from the headlands. Then count the number of ears in that row. In 15-inch rows, use the 17 feet, 5 inches, and count two adjacent rows.

Systematically pluck three or more ears per row, such as the 5th, 7th and 11th ear or some other combination. This removes personal bias about ear selection. If you encounter a second ear on a plant, check if there is actually an ear inside with some kernels. Often it is an empty shell with nothing inside the husks and can be ignored.

Remove the husks and count the rows around on each ear and then average the three values. Usually it will be 16 or 18 rows around, but sometimes you will count a 14 or 20.

Count the kernels per row using the point where the average row stops. Count the number of kernels along that row and average the values for the three ears. This is where the difficulty begins depending on amount of tip-back. If you do this too early and the crop is under stress, tip-back is still happening and you may be overestimating yield. Generally, as we get to a dough stage, though, tip-back on an individual ear ceases and remaining kernels survive.

The value of 90 represents 90,000 kernels per bushel. In a normal year, that is a good number to use, but that value could range from 60,000 to 120,000 depending on growing season conditions and hybrid.

Sample four to six areas in a field to reduce variation.

Dan Davidson can be reached at askdrdan@dtn.com 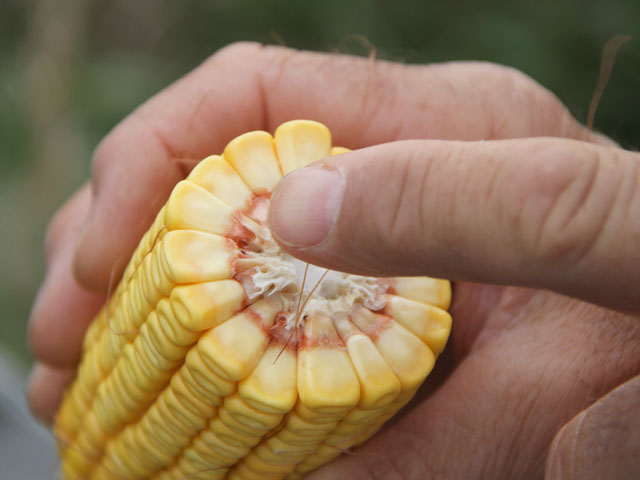