ROCKVILLE, Md. (DTN) -- It's that time of year again, when a soybean plant can go from thriving to dying in a matter of days.

Sudden death syndrome (SDS) is surfacing in soybean fields across the Midwest. The disease will be at its worst in areas that saw heavy rains this spring, as well as in mid-July and August.

"I would say that we certainly had the right conditions early on for the disease," said Iowa State University plant pathologist Daren Mueller. As you scout for the distinctive interveinal yellowing and browning leaves of the disease, now might be a good time to brush up on five common misperceptions about the disease.

Planting later into warmer soils can keep the SDS fungus at bay or lessen its impact, it's true.

"You might get a little less SDS or reduce your risk of getting any, but you're also reducing your yield potential so much with late planting," Mueller explained. "We really want farmers to go after maximizing yield."

Keep in mind that SDS severity is heavily influenced by weather, so late planting is no guarantee of reducing SDS symptoms, Mueller added. Wet, cool weather in June may be rarer than in the spring, but it's always a possibility.

The SDS fungus isn't too picky when it comes to a host. While it prefers soybeans, it can also survive -- and even thrive -- in corn residue, according to Iowa State research dating back to 2010.

A more recent study from the University of Minnesota (http://bit.ly/…) showed that the fungus can survive on a broad range of hosts, from alfalfa to sorghum and wheat.

That doesn't mean crop rotation is out the window as a management practice. It just needs to be longer than one year to make a difference.

Scientists at Iowa State have conducted long-term rotation studies since 2010. While a two-year corn-soybean rotation does little to reduce SDS infections, a three-year rotation with oats, corn and soybean shows significantly less infection. A four-year rotation that adds alfalfa performs even better.

MYTH 3: TILLAGE IS A MUST

The SDS fungus loves cold, wet, compacted soils. So, naturally, growers often turn to tillage to warm and dry out soils before planting.

While that tactic might work to reduce SDS symptoms in heavily compacted spots in a field, research doesn't support it as a consistent, long-term SDS-prevention practice, Mueller noted.

He has been measuring SDS infections in no-till and tilled fields in Iowa since 2010, and at no point has tillage proven to lower or affect SDS infections at all.

Farmers may have other reasons for tillage, of course, but this disease shouldn't be their primary one, Mueller concluded. "Don't spend money on tillage just to manage SDS," he said.

You've probably heard both claims at one time or another -- cover crops prevent SDS or they make it worse.

The truth is we don't have good evidence yet to prove either definitively, Mueller said. Because cover crop species are so numerous and diverse, researchers have had to pick and choose their study subjects, resulting in narrowly focused studies.

For example, one study from the University of Illinois showed that cereal rye had a suppressive effect on the SDS fungus (http://bit.ly/…). But, as the previously mentioned Minnesota study showed, the fungus can also survive on the roots of crops like red clover and peas, popular cover crop choices.

Iowa State researchers recently inoculated a field with a 15-year history of cover crops with SDS and found no effect on the disease, Mueller said.

The good news is that more researchers are tackling this topic as interest in cover crops grows among farmers, so answers are likely coming.

MYTH 5: NO TREATMENTS EXIST FOR SDS

While no in-season treatments exist for SDS, university researchers have found good success with a seed treatment from Bayer Crop Sciences called ILeVO.

Across university trials, the seed treatment appears to significantly reduce SDS symptoms and preserve yield when the disease is present.

Mueller estimates that Iowa State studies have shown a 36% reduction in SDS severity, with the majority of yield bumps ranging from two to 10 bushels, in moderate to severely infected fields. When SDS symptoms are lighter, that yield bump drops to the 2- to 3-bushel range, and with no SDS in the field, it falls close to zero.

Since predicting SDS infections is hard to do, Mueller recommends using field history as a guide when considering ILeVO.

"If a field has had real problems with it in the past, that's probably significant enough risk," he said. "But if you're just putting [ILeVO] out there in fields with no history of SDS, the chances of getting your money back are pretty small." 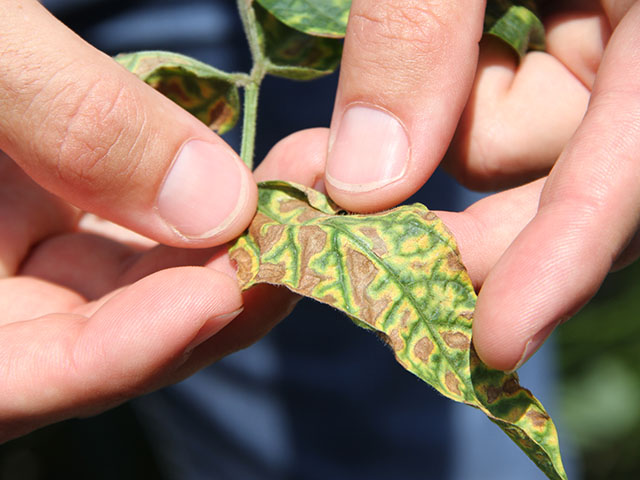