DECATUR, Illinois (DTN) -- Jeremy Wolf saw nearly half his soybean acreage injured this summer from dicamba herbicide that went astray. What's troubling him now, though, is what to do about the situation for the 2018 planting season.

"My entire summer has been consumed by trying to determine exactly how my beans got damaged and how to respond to that," said the Homer, Illinois, farmer. "I've seriously considered planting all corn next year. I do not want to go through another year like this."

Even growers pleased with weed control offered from the Xtend technology are scratching their heads as seed-selection decision time approaches. There are concerns over the possibility of additional label restrictions and how those might influence use. Insurance questions loom for both individual farm policyholders and custom applicators. The chance that sensitive soybean seed fields might have also fallen victim to dicamba spray is fueling some seed supply rumors.

University of Missouri weed specialist Kevin Bradley released updated estimates from a poll of state departments of agriculture indicating there are 2,242 official dicamba-related cases under investigation across the 16 states, as of Aug. 10. University weed scientists responding to his survey estimated that 3.1 million acres of soybean have some level of dicamba injury this season. See Bradley's map here: https://goo.gl/….

The Environmental Protection Agency (EPA) has made no secret of its concern over these reports of crop damage. Responding to DTN inquiries over what possible action might be taken, an EPA spokesperson said: "We are working with the states and the registrants to better understand the issue. We are reviewing the current use restrictions on the labels for these dicamba formulations in light of the incidents that have been reported this year. The underlying causes of the various damage incidents are not yet clear, but EPA is reviewing the available information carefully. We will rely on the best information available to inform our assessment."

In Arkansas, where there have been 895 complaints filed as of Aug. 16, a 19-member special task force convenes today, Aug. 17. The task force will review dicamba technology, investigate the use and application problems and make long-term recommendations.

"It's impossible for growers to plan until they know how or if these products will be able to be used," he said.

In Minnesota, the state re-registers herbicides yearly, according to Allen Sommerfeld, spokesperson for the Minnesota Department of Agriculture. With 202 injury complaints recorded in Minnesota as of Aug. 15, state officials are hustling to gather as much information as possible to make determinations on dicamba for next year.

While a variety of situations have contributed to the off-target movement of dicamba this year, volatilization and travel of the chemical remains at the heart of the concerns. University of Arkansas weed scientists have released studies showing that every dicamba formulation they tested demonstrated volatility. Some formulations were found to volatilize at least 36 hours after application and move from the target site in spite of label-compliant application efforts.

Monsanto, who sells XtendiMax for use with the Xtend trait system, told DTN in recent written correspondence, "We are not aware of any non-volatile dicamba formulations available today. Off-target movement can occur with any pesticide application. However, XtendiMax with VaporGrip Technology allows farmers to see a significant reduction in volatility potential as compared to earlier dicamba formulations. Using published, https://www.astm.org/…, Humidome methodology, we discovered that this technology provides a 90% reduction in volatility potential as compared to Clarity and a 99% reduction compared to Banvel. We have application requirements in-place designed to minimize the potential of off-target movement."

USE AS PREPLANT BURNDOWN

No volatility is different than low volatility, maintains Bradley, who is also conducting herbicide movement tests in Missouri.

"Right now, my recommendation for growers who want to plant Xtend next year is that they use it in as a preplant burndown for weeds like marestail and giant ragweed, but that we do not spray these approved products postemergence in-crop in June and July," Bradley said.

"I know that's not exactly how farmers want to use it, and I know that's not how the industry wants it used. But when I look at all the injury, as objectively as possible, I don't think spraying it post is worth the risk," he said.

Bradley sees this as a compromise. Farmers who like the trait can still use it and still have a good tool for those tough-to-control winter annuals and early-emerging summer annuals. "We seemed to be able to use dicamba without trouble in the April/May timeframe. Everything broke loose here in June/July. Until we figure out exactly why, that is my recommendation," he said.

He also suggested that growers take a breath and forget about early seed discounts and resist pressure to book seed early. "I'm not worried about quality issues. Seed companies take that very seriously and will address those concerns," Bradley said.

"You need to know how those labels are going to change. Custom applicators are talking about cut-off spray dates. You need to be talking to all your suppliers and seeing where they stand." 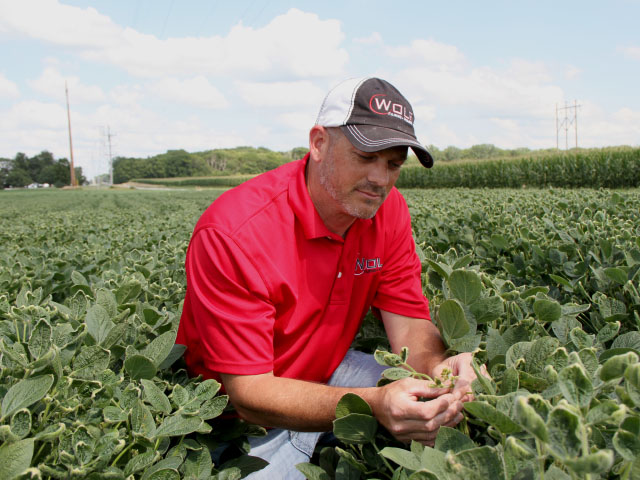