Crop scouts visited 225 fields and calculated an average overall yield of 35.7 bushels per acre (bpa), compared to 197 fields and 46.5 bpa last year. That brings the two-day total average yield to 37.2 bpa, down from 44.8 bpa last year.

This year's dry conditions have forced the wheat tour leaders to take special measures to account for the high number of abandoned fields, as well as properly calculate the yield of drought-damaged wheat fields, scouts and tour leaders told DTN.

Months of little to no rain have left many wheat fields stunted and low-yielding, wheat tour scouts said.

"As we moved deeper into Sheridan [County], we definitely saw more drought conditions as plant height is below the knee and spikelet numbers decline," Ernst said.

On Twitter, some scouts' photos showed fields with calculated yields as low as 5 and 8 bpa.

The wheat tour organizers took care to show scouts how to accurately measure drought-stricken wheat plants, said Wheat Quality Council executive vice president Dave Green. That means splitting open heads and checking to see if there is actually a kernel inside, in addition to counting stems, rows and spikelets, he said.

"The wheat plant does not want shriveled-up children," he explained. "It wants healthy, plump children. So if it only has so much water and it has to sacrifice some kernels for the others, that's what it does."

Philip Volk, a farmer and board member of the North Dakota Wheat Commission, said scouts on his route in central North Dakota were careful to count out worthless kernels.

"We were told that the ones that are just a sliver, we can't count them as a kernel, because they're going to be dockage or blown out the back of the combine in the harvesting process," he said.

Yields improved a bit as scouts moved eastward, toward their destination of Devils Lake, North Dakota, Green said. His car headed due north from Bismarck to Minot, before turning east.

"We saw some bad wheat here today," he said. "But it's perking up as we move east." By mid-afternoon, however, his route was still averaging 22 bpa, compared to 61.8 bpa last year.

"There is definitely more moisture in the north compared to the south," said Ed Kessel, a farmer and second vice president of the North Dakota Grain Growers Association. Kessel's car of scouts found four durum fields ranging from 30 bpa to 60 bpa in north-central counties.

"I am surprised by the disease pressure -- tan spot, rust -- and also the insect pressure," Kessel added.

GRAPPLING WITH ABANDONMENT AND HISTORY

Because they will not be taken to harvest, abandoned and baled wheat fields generally aren't incorporated into yield estimates for either the wheat tour or USDA.

The tour didn't want to completely discount zeroed out fields, either, Green said.

"Normally all we do is publish the yield," he explained. "But this year we have all the routes make an estimate on the percentage abandonment they saw on the route they took. At the end, we're going to present that to everyone, and they can make their own decision on how it pencils in for the whole state."

So far, abandonment estimates have ranged widely, Volk said. "Some think abandonment could be as high as 30% to 40%, others say just 10%," he said.

This year has also spurred comparisons to the historic 1988 drought among participants and the state's farmers, Volk added.

Thursday is the third and final day of the spring wheat tour, and scouts will sample fields in northeastern North Dakota and northwestern Minnesota before ending the day in Fargo. There, they will release final calculated yield averages for the three-day tour. 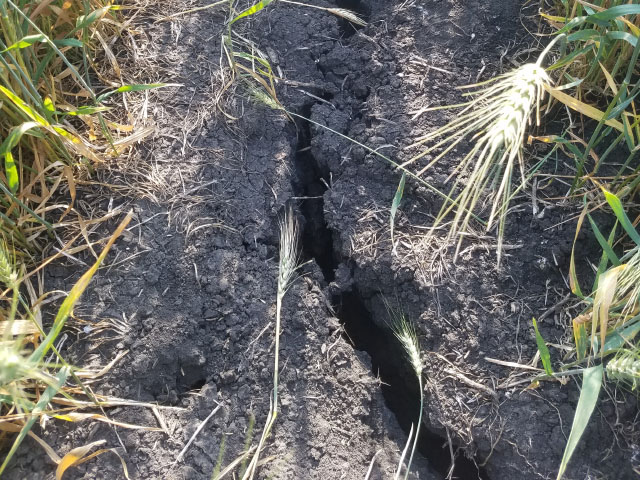