ROCKVILLE, Md. (DTN) -- From the Carolinas to Texas, the cotton bollworm is leading an assault on Bt cotton again this year.

"We're seeing earlier and higher bollworm populations than normal," he said. "As the season progresses, that means we'll see more generations of the insect."

For now, entomologists are trying to get growers reacquainted with how to scout for bollworm eggs and caterpillars in order to make timely insecticide applications.

Now Kerns has also confirmed that some populations tested from Louisiana and Tennessee last year have resistance to Cry2Ab -- the second protein found in Bollgard II. Nor can growers lean on the second protein in WideStrike cotton, Cry1F, which has only sublethal effects on the bollworm, Reisig said.

Growers may also see problems with Bayer's TwinLink cotton, which expresses the proteins Cry1Ab and Cry2Ae, which act similarly to the proteins found in Bollgard II, Reisig said.

Many bollworms might be moving into cotton from corn this year (where they are called the corn earworm). There, they have been exposed to similar Bt proteins and may already be predisposed to survive on Bt cotton, Reisig added.

"Growers can't just lean back on Bt cotton and expect it to work this year," he said. "Especially not with the bollworm populations we're seeing."

The good news is that Monsanto, Dow and Bayer have all added the Bt protein Vip3A to new cotton varieties called Bollgard 3, WideStrike 3 and TwinLink Plus, respectively.

These products should supply good control of the bollworm, but their availability isn't as widespread as the older varieties yet, Reisig noted. Bollgard 3, in particular, won't have a full commercial launch until 2018, although some varieties are being planted on a limited scale this year.

Growers have two options for scouting the bollworm -- doing a pro-active search for eggs or a secondary search for emerged caterpillars.

The egg method is complicated by the fact that there is no good way to distinguish the eggs of the bollworm from the eggs of the tobacco budworm, which is well-controlled by Bt cotton, Reisig noted. The eggs will be white and tiny -- smaller than a pencil point -- and laid singly, not in bunches.

Most guides recommend looking on leaves in the terminal of the plant for eggs, but in North Carolina they are also commonly found in the middle of the plants, near blooms, Reisig said.

The second strategy involves scouting for emerged bollworm caterpillars and spraying when they are still quite small and haven't yet burrowed into a bloom, square or boll.

In North Carolina, pyrethroids are still among the insecticides recommended for use against bollworm, Reisig said. See a list here: https://goo.gl/….

Be sure to check for more local thresholds and insecticide recommendations with your state Extension office, as they can vary by state and region.

Emily Unglesbee can be reached at emily.unglesbee@dtn.com. 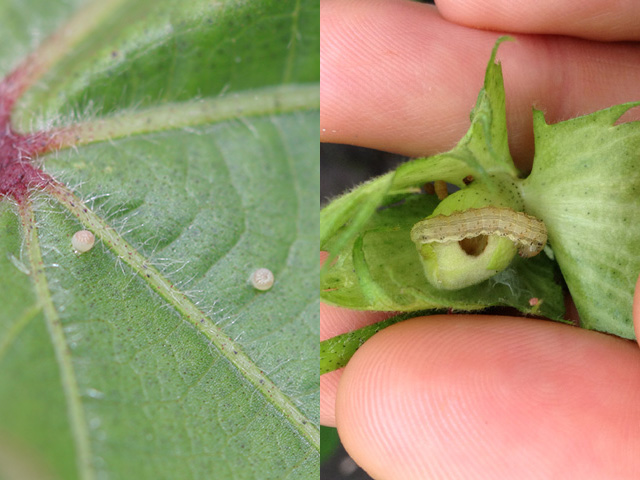