Last year, western bean cutworms chewed through half of Battles' Bt corn hybrids, lowered yields 3 to 5 bushels in the worst spots and left him vulnerable to ear rots and mycotoxins.

After years of chipping away at the effectiveness of the Bt trait Cry1F (Herculex), large populations of the western bean cutworm (WBC) wreaked havoc on cornfields like Battles' in states like Michigan, Indiana and Ohio last year.

The problem is even more severe in Ontario, where researchers have officially confirmed that the pest is resistant to the Cry1F trait, which only ever provided low and variable levels of control anyway, said Jocelyn Smith, a research associate in field crop pest management at the University of Guelph.

Smith, DiFonzo and other entomologists are recommending that growers who had WBC problems last year treat Cry1F-traited Bt corn as though it was non-Bt corn. That means diligent scouting as moth flights peak in the second half of July and timely insecticide applications.

Registered by DuPont Pioneer and Dow AgroSciences, the Cry1F trait was first sold under the Herculex corn brand. Through licensing, the trait is now extremely common in many corn hybrids from multiple companies, such as SmartStax (Monsanto and Dow), Powercore (Dow), most AcreMax (Pioneer) hybrids and many Agrisure (Syngenta) hybrids. Many regional corn seed companies also license and sell the trait.

(Syngenta's Vip3A trait -- Viptera -- does show good control of western bean cutworm, but it isn't as widely available as Cry1F in northern corn hybrids yet.)

Use Michigan State's Handy Bt Trait table to see which Bt traits your hybrids have: http://msuent.com/….

Cry1F never fully controlled the western bean cutworm, which was added to its label years after the trait was first marketed to target European corn borer, Smith noted.

Just a few years after WBC surfaced in Ontario in 2008, field trials showed no difference between Cry1F-traited hybrids and non-Bt hybrids, she said. The rapid development of resistance may have been sped by integrated refuge practices (known as refuge-in-a-bag), as well as heavy populations of the pest, Smith said.

"As soon as we saw pest pressure go up, [Cry1F] control went down," she said.

Growers in Indiana, Michigan and Ohio saw this exact scenario play out last year, DiFonzo said. Battles watched WBC populations rise steadily in his fields in recent years before the large population last year made clear that Cry1F was no longer working there.

This year Battles has installed a WBC moth trap. He counts its catches daily and sends weekly moth counts to Purdue University.

In the upper Midwest, moth flights usually peak in the third and fourth week of July, DiFonzo said. Growers who had fields affected by WBC last year should be sure to scout for egg masses several times over the next two weeks, she said.

Scouting for WBC eggs is difficult and uncomfortable, Battles pointed out. The moths prefer pre-tassel fields, which allow the larvae to hatch and feed on leaf, tassel and pollen tissue before migrating down into the emerging ear as larger, more damaging caterpillars. Once in the ear, they are protected from insecticide applications, which leaves growers with a small window for treatment.

If your corn plants are at eye level or higher, DiFonzo recommends an eye shield of some type to help view upper leaves more easily. Scout at least 100 plants scattered throughout five different spots in a field. If you orient yourself so that the sun is behind the leaves you're facing, you should be able to spot the shadows of egg masses on the upper canopy as you go, DiFonzo said.

Look for coin-sized clusters of tiny, white eggs, which turn purple just before they hatch. If you spot them on 5% of your plants, it's time to spray.

Keep in mind that the 5% number is cumulative, DiFonzo added.

"That cornfield will be attractive to [WBC] moths for up to two or three weeks of scouting," she explained. "So if you spot 2% one week and 3% the next week, then you're at threshold, because the eggs from last week have hatched and the larvae are still in that field."

You can find a list of effective insecticides from Purdue here: http://bit.ly/…. 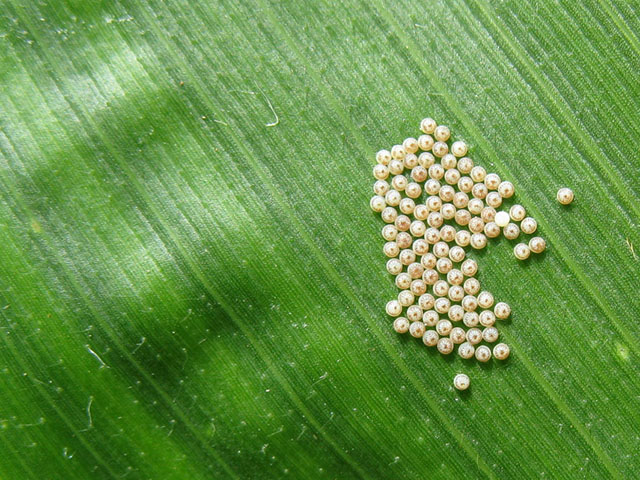