ROCKVILLE, Md. (DTN) -- Wheat took a beating in the Great Plains this year.

A late-season winter blizzard coupled with an outbreak of wheat streak mosaic has left growers harvesting wildly different wheat crops across each state -- and sometimes within the same field.

Despite the variable yields and damage, one common denominator has emerged, however.

"Most of the wheat is fairly low protein -- for the second year in a row," said Kansas State Extension Agent Tom Maxwell. "They [end users] are really hunting for some protein."

With the Kansas winter wheat harvest in full force, most reports of protein levels are varying between 9% and 11.5%, Maxwell said. Oklahoma State University Small Grains Extension Specialist David Marburger said he thinks the state's wheat crop will average below 11.5%.

"The higher the protein content, the harder and stronger the flour and the more it will produce crusty or chewy breads," she explained. "The lower the protein, the softer the flour, which is better for cakes, cookies and pie crusts."

When the winter wheat crop came in with low protein in 2016, flour millers had more options for blending it with higher-protein wheat. They could use the high-protein spring wheat crop or they could look to the 2015 winter wheat harvest, which averaged 12.3% protein, Kennedy said.

But this year, the spring wheat crop has been greatly reduced by persistent drought in the Dakotas, and the 2016 winter wheat crop won't provide any protein boost.

"This year, mills will not have the same luxury of a high-protein carryover, and there is already talk that 12% protein hard red wheat may have to be imported, possibly from Germany if the quality is acceptable," Kennedy reported.

Last year's low-protein crop was a predictable result of record yields, noted Maxwell. Protein levels are generally determined by the amount of nitrogen available to the crop during grainfill. When kernels are large and bountiful, that nitrogen gets diluted, resulting in lower protein levels.

This year, the source of low protein is less certain, but economics likely played a role, Marburger said.

"This year, people didn't want to spend money on nitrogen fertilizer, and many did not get an adequate level to get a high protein content," he said.

A DIFFERENT CROP IN EVERY FIELD

Maxwell covers the central Kansas counties of Saline and Ottawa, where growers are sitting on some of the best wheat in the state.

He said yield reports have ranged from 45 to 75 bushels per acre, with some impressive outliers in the 80- and 90-bpa range. Some freeze damage from the late-April snowstorm system has surfaced, but he estimates the counties will have an above-average harvest.

Out in western Kansas, farmers are facing a different story. Near Leoti, Kansas, Rick Horton's wheat sat under 2 feet of wet snow for nearly a week in early May.

Although a lot of it did stand back up, kinked stems took their toll when the weather turned hot and dry in June, he said.

"It didn't allow the plant to be very efficient taking moisture in from the base," he explained. "We lost a good amount of heads." To his west, many fields were abandoned to wheat streak mosaic damage, Horton added.

Out in Syracuse, Kansas, Kent Eddy's wheat was one of the many victims of the virus, which has spread widely across the Great Plains this year.

Eddy lost up to a third of his acres to the disease. The rest aren't faring too well, either. With harvest 25% done, his fields are averaging in the low-20s bpa, about two-thirds his normal yields, he told DTN.

"It's hard trying to diagnose just what the reason is," Eddy said. "We know it's probably some combination of wheat streak mosaic and freeze from the blizzard."

Down in Oklahoma, only Panhandle growers are still finishing up the harvest, said Marburger. Most of the state's yields are ranging from the mid-teens and mid-20s in drier parts of the state up into the 40- to 70-bpa range in the well-watered central counties, he said.

"The yield average will probably be a little above average, but not quite the level we were last year," he said. 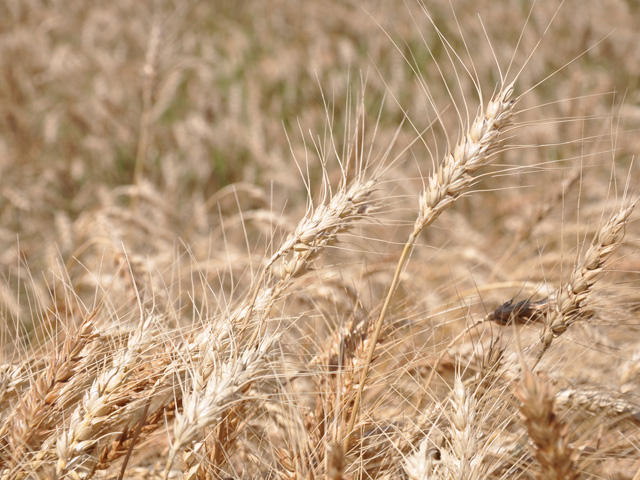